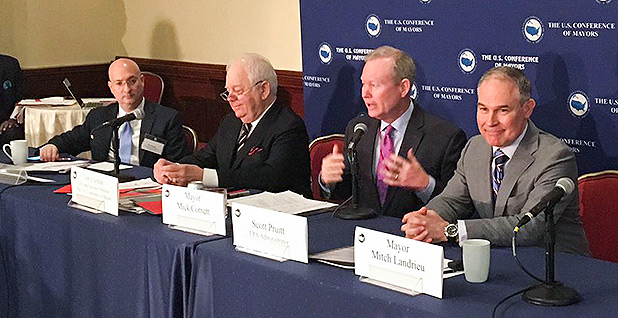 U.S. EPA Administrator Scott Pruitt spoke to the U.S. Conference of Mayors this morning as his agency enters into budget talks with the White House. Photo by Kevin Bogardus.

U.S. EPA Administrator Scott Pruitt pleaded with mayors this morning to share their environmental success stories with his agency.

The newly minted agency chief spoke to the U.S. Conference of Mayors in Washington, stressing that he wants to protect certain EPA programs from budget cuts proposed by President Trump. The White House blueprint would cut EPA’s budget by nearly a quarter, or roughly $2 billion, and lay off 3,000 employees, which would leave several agency initiatives in limbo.

In his talk with mayors, Pruitt cautioned that the budget process was just starting.

"There are some concerns about some of these grant programs that EPA has been a part of historically," Pruitt said. "I want you to know that with the White House and also with Congress, I’m communicating the message that the brownfields program, the Superfund program, water infrastructure … state revolving funds are essential to protect."

The EPA administrator said mayors have success stories with those cleanup programs such as brownfields and Superfund. They should share those stories with his agency as budget talks commence.

"There are tremendous successes all over the country," Pruitt said. "I want to hear from you about those successes. I want to be able to share those with the White House."

Pruitt said those programs lead to job creation as well as benefits to the community and the environment.

The EPA chief also noted that he has been invited to be part of the president’s team on infrastructure and will be heading to the White House this afternoon to discuss the issue.

In his early days as agency head, Pruitt has talked up the importance of clean water and cleanup programs. Today, he also discussed working with mayors to take down air pollution, noting there are still several nonattainment areas in the country that do not meet national air quality standards.

"I look forward to partnering with you in the future," Pruitt said.

State agencies stand ready to work with Pruitt at EPA.

"Our members realize this is the beginning of the conversation for FY2018 budget, and will look to engage with U.S. EPA, Congress and the White House to highlight recent success stories and the need for cooperative approaches to core Clean Air Act responsibilities," said Clint Woods, executive director of the Association of Air Pollution Control Agencies, in a statement to E&E News.

Nevertheless, Trump’s budget cuts proposed for EPA have been meeting pushback on Capitol Hill as well as from agency employees.

Sen. Tom Carper (D-Del.), ranking member on the Senate Environment and Public Works Committee, said earlier this week that the proposed budget cuts "will put people across this country at risk for illnesses or even premature death." In addition, EPA Region 5 employees, based in Chicago, were slated to protest this afternoon against the president’s budget plan while federal employees rallied by the U.S. Capitol today against the cuts.

Some feel, however, that the Trump administration could change course, given the budget process has only just begun.

Jim Brainard, the Republican mayor of Carmel, Ind., and an outspoken supporter of fighting climate change, said he’s "cautiously optimistic" that the president’s views on climate change and environmental protection could change.

"Like so many things, the president started out, he hadn’t been in government, he hadn’t studied a lot of the issues," Brainard said. "We’ve seen him do 180s on several issues at this point."

He said he’s hopeful because the president’s daughter Ivanka and son-in-law, Jared Kushner, seem to support the environment. Brainard was also pleased that Pruitt asked for examples of the successful use of EPA funds to clean up brownfields.

"I haven’t met a Republican or Democrat yet that wants to drink dirty water or breathe dirty air," Brainard said.

"I think we start to take into the equation the health cost of dirty air, the ozone issue that the administrator mentioned, there may be an opportunity to change minds at the White House."

Brainard said he thinks the administration is wrongfully looking to slash agency funds in order to reduce taxes and boost defense spending.

"I think they’re looking to support this proposal, which may not have been well thought out, to cut taxes. They’ve got to look at every function of government and then combine that with the increase they want to give to the U.S. military," Brainard said. "I’m not sure the math works even in the best of cases."