Greener cooling could create jobs. Will Trump stifle it? 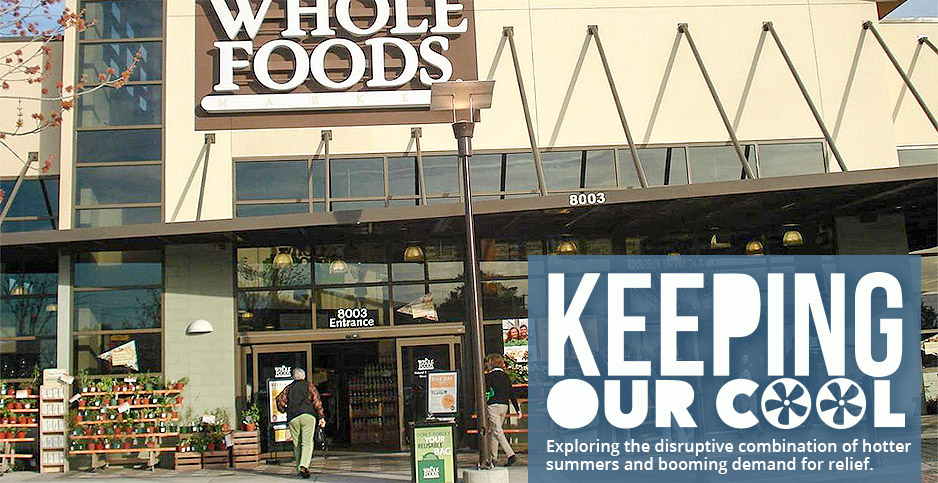 Whole Foods is among the grocery chains using greener refrigerants in their stores. Portal Abras/Flickr

Part three of a series. Click to read parts one and two.

Earlier this year, one of the world’s largest supermarket chains announced it would use a new refrigerant in stores across the United Kingdom.

The chain, Tesco PLC, boasted that the change in more than 1,200 stores would lower the company’s carbon footprint by up to 40 percent, "equivalent to removing 70,000 cars from the road over the next three years."

The switch to the new refrigerant — called N40 — is highly symbolic. Among commercial buildings, supermarkets are some of the biggest users of air conditioning, a demand that is rapidly expanding as the climate grows warmer. Scientists say one of the growing causes of the gathering heat is air conditioning refrigerants that leak. They can trap many times more of the sun’s heat in the atmosphere than can carbon dioxide.

Some of the traditional refrigerants were over 10,000 times more powerful than CO2, but stiffer national and international regulations are beginning to phase them out. Meanwhile, stores are scrambling to find new products like N40 that are less harmful, more energy-efficient and designed to be easily replaced in existing air conditioning systems.

"The user community in Europe is more aware of the upcoming regulations," said Ken Gayer, vice president and general manager of Honeywell International Inc.’s division that launched N40 two years ago and is following a $900 million investment plan to make more climate-friendly refrigerants for automobile air conditioners and other product-hungry markets.

"It’s a great jobs and U.S. competitiveness story," Gayer remarked, noting that Honeywell, based in Morris Plains, N.J., is creating thousands of construction and factory jobs in the United States to feed the growing international and domestic markets. "We’re trying to put our money where our mouth is on this investment."

Honeywell and other U.S. companies, investors and inventors see a prime opportunity to create jobs and revenue streams in their continuing efforts to help the world keep its cool. But some big questions loom over those prospects.

One is whether President Trump’s move to pull the United States out of the Paris Agreement to mitigate rising temperatures will pull Americans out of the growing global conversation about how to improve air conditioning.

Another is whether his proposals to sharply cut the budgets of two government agencies that helped the United States start the global fight to mitigate climate change — U.S. EPA and the Department of Energy — will cripple further strides toward innovation.

Honeywell’s venture is just one example of several underway.

A Whole Foods Market that opened in Santa Clara, Calif., in July 2016 features a hybrid air conditioning system, imported from Canada, that uses carbon dioxide as its main refrigerant and propane to help condense it. One indicator of how climate-friendly refrigerants are is a low score in what is called GWP, for global warming potential. N40, the new refrigerant used by Tesco in the United Kingdom, has a GWP of 1,273. The GWP for CO2 refrigerant is 1; the GWP for propane is 3.

Whole Foods, which has been working with EPA’s GreenChill Partnership program since 2008 to help curb the substantial global warming emissions of supermarkets, has installed ultra-low-GWP refrigerants in the air conditioning units of 22 of its 465 stores.

"I think we’re getting a better handle on it," said Tristam Coffin, who oversees Whole Foods’ sustainability program in Northern California. This is not just altruism, he admits. He wants GreenChill to share Whole Foods’ experience with other supermarket chains because their added demand for improved air conditioning systems will help lower the cost for Whole Foods.

As part of its proposed 31 percent EPA budget cut, the Trump administration would eliminate GreenChill, along with many other agency functions.

‘This technology is desperately needed’

One of the globe’s arbiters of better building air conditioning standards is the American Society of Heating, Refrigerating and Air-Conditioning Engineers (ASHRAE), which has 57,000 members around the world.

"Progress is being made, although it is not at the pace ASHRAE had hoped for, nor is it at the pace our planet needs," said Tim Wentz, the group’s president.

His group has been sponsoring research into more climate-friendly refrigerants. Although some of them are "mildly flammable," he thinks further research and experience will show they can be safely used. ASHRAE is working with the United Nations on that issue so developing countries feeling the heat can avoid the use of super-warming refrigerants, which EPA estimates could quadruple by 2030. "This technology is desperately needed," he added.

Since 2008, ASHRAE has also been working with DOE, with architects and with the U.S. air conditioning industry to push the design of what are called zero-energy buildings, which export the same amount (or more) of renewable energy as the energy that is actually delivered to the building. Wentz regards this as a critical step because commercial buildings are the nation’s largest energy users.

This is an area where Europe has had a "head start on making that vision a reality," because electricity prices there are much higher and most countries have mandatory benchmarking systems that rate buildings on how much energy they actually use, he said.

"Our industry needs to do a better job of educating [building] owners to the advantages of designing, constructing, operating and maintaining a building in an energy-inefficient manner," he said, because failures can have many adverse short- and long-term outcomes. He pointed to buildings that have "significantly oversized heating and cooling equipment" due to a lack of an energy-efficient design.

ASHRAE helped create one symbol of U.S. progress. It’s an H-shaped, 360,000-square-foot office building sitting on the campuslike grounds of DOE’s National Renewable Energy Laboratory (NREL) in Golden, Colo. It supplies all the electricity it needs to run heating and cooling systems from solar photovoltaic panels on its roof and the roof of an adjacent parking lot.

But much of the energy cost savings of the $90 million project — called the Research Support Facility building — stems from matching the building’s design to its outside environment. Strong summer sunlight is reduced by having fewer west-facing windows and by using electrochromic glass that can tint the windows as heat rises.

Efficient chillers on the building’s rooftop circulate cool water through ceiling pipes, keeping them at 62 degrees, and a "labyrinth" of cool, dry outside air stored in the cement passages in the building’s basement at night is pumped through the building’s ventilation system during the day.

"Our first strategy was to design the building so that it uses the least amount of air conditioning as possible," said Shanti Pless, a researcher from NREL’s commercial buildings group that monitors the building.

Pless says the building will not remain the nation’s largest zero-energy building for long because two technology companies, Apple Inc. and Tesla Inc., are building bigger versions of the concept and other U.S. companies are copying the process used by NREL to design and build it.

Some utilities, according to Pless, are also interested in the replication of zero-energy buildings. Having numbers of these buildings in their areas would help them reduce temporary demands on the local grid and drop the peak prices of electricity, which are usually "driven by everyone turning on their air conditioning at the same time."

The Trump administration has proposed some of its sharpest budget cuts for energy efficiency programs — including a 31 percent reduction to the budget of DOE’s Building Technologies Office. Among the groups that have protested is the American Institute of Architects, which calls the approach "misguided."

‘Odds are you rarely think about it’

Since 1992, DOE has set minimum standards for air conditioning efficiency, called the "seasonal energy efficiency ratio," or SEER. The idea was to push homeowners to buy more modern units that consume less electricity.

But SEER hasn’t worked that well, according to Francis Dietz, a vice president of the Air-Conditioning, Heating and Refrigeration Institute, which represents most of the air conditioning and refrigerant equipment manufacturers. While the required SEER level for new equipment is now set at between 14 and 15, most homeowners still nurse along older equipment rated between 8 and 10.

"If you have an older machine that’s still running and doesn’t give you any trouble, the odds are you rarely think about it," he said, referring to potential energy savings of newer, more efficient equipment. Owners of supermarkets and other buildings who pay more for air conditioning may be more aware of potential electricity savings, he noted, but they are put off by federal tax rules that stretch out depreciation of new equipment over a period of 39 years, "which is beyond the realistic life of the equipment."

Dietz also pointed to a recent study by the National Institute of Standards and Technology that shows people who buy new equipment may lose as much 30 percent of their increased efficiency due to improper installation.

Despite the confusion in the marketplace, companies continue to develop improved air conditioning equipment. One example, a process invented by NREL researchers, is called the Desiccant Enhanced Evaporative Air-Conditioning system, or DEVap. It would cut out the compressor, the most energy-intensive part of a building’s air conditioning system, and replace it with a much smaller and cheaper device that would dehumidify outside air being sucked into the system.

Traditional air conditioning does some dehumidifying, but DEVap does a more complete job, circulating a saline solution that absorbs water from the incoming outside air, which makes the air conditioning process much more efficient. Then waste heat from inside the building can remove the water absorbed by the saline solution, which is recycled. The water and heat are sent back outside.

Several companies are working on variations of this cycle, which NREL says has the potential to cut 30 to 90 percent of the energy required by conventional air conditioning systems and uses only water and concentrated salt water.

A Deerfield Beach, Fla., company called Be Power Tech has licensed the process from NREL and is building prototypes that mate DEVap with natural-gas-powered electricity generators that will create the heat and electricity to not only run the new air conditioning system but also serve the building’s heat and power needs.

The California Energy Commission will sponsor tests of the Be Power prototypes to see what their impact might be on the state’s electrical power grid. Having multiple buildings generating electricity from gas could reduce expensive peak power demands on utilities, said Daniel Betts, president of Be Power Tech, and also allow some building owners to pay for their air conditioning by selling their excess electricity back to the grid.

"That completely changes the paradigm of how you do air conditioning," he said.

Another hopeful paradigm-changer, Aaswath Raman, heads a company called SkyCool Systems. His plan: Use devices that look much like solar panels on rooftops to make buildings’ existing air conditioning systems more efficient without adding any additional use of refrigerants or electricity.

A circulating fluid takes the heat from the conventional air conditioning system’s condenser and sends it to the rooftop panels. They contain seven layers of chemical coatings on glass and electronics that can take heat radiation at certain wavelengths from the panels and reflect it high into the coolness of the Earth’s upper atmosphere.

Raman and two colleagues at Stanford University won a small grant from DOE’s Advanced Research Projects Agency-Energy (ARPA-E) to show that a "scalable and cheap manufacturing process" would produce a heat-removal system that could lower the ambient temperatures around a given building by 20 to 30 degrees Fahrenheit.

Their broader proposal won another $2.9 million grant from ARPA-E to develop the system. A pilot demonstration is slated for next year.

"We definitely have folks interested in this," Raman explained in an interview with E&E News. "We wouldn’t have been able to do anything without their support and interest," he said, referring to ARPA-E, which would also be eliminated under Trump’s proposed budget.