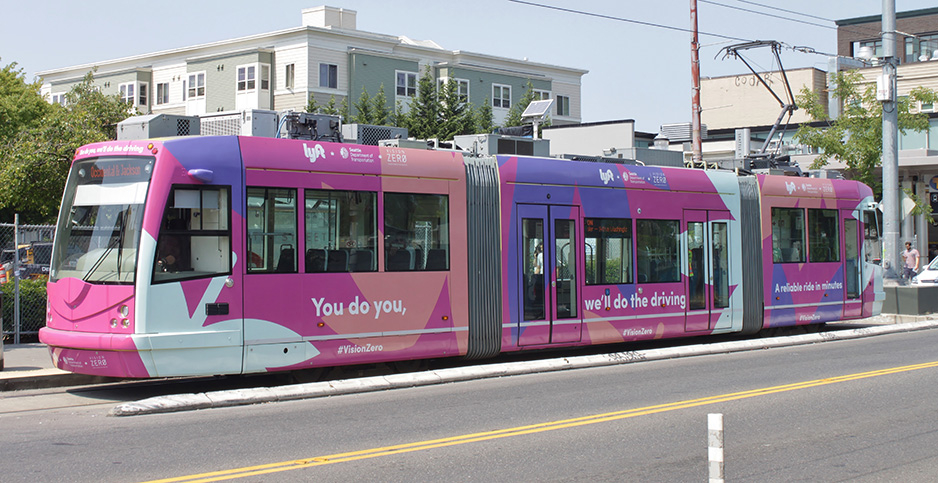 A Lyft ad in partnership with the Seattle Department of Transportation is shown in Seattle. SounderBruce/Flickr

Ads promoting ride-share companies have appeared at bus stations and subway stops across the country over the past year, leading environmentalists to accuse the services of detracting from public transit.

Ads have been reported at public transit stops in several major cities. One at a Miami bus stop declares Lyft is "the way to ride in Miami." Another Lyft ad plastered on a train in Boston proclaims: "Miss your train in style."

Yet in its promotional materials, Lyft says it wants to complement public transit, which produces far fewer greenhouse gas emissions than cars on a per-person basis.

"Our mission is to improve people’s lives through the world’s best transportation, and providing more ways to get around without owning a private car builds stronger communities," the company said in a news release announcing the launch of Nearby Transit, which allows people to see public transit options in the Lyft app.

"That’s why we’re working to make transportation more equitable and enhance mobility options while taking cars off the road — in our product and working alongside public transportation agencies," Lyft said.

For years, public transit ridership has been falling in cities across the country. Environmentalists say reversing this trend is crucial for reducing emissions from the transportation sector, which is now the country’s largest source of carbon dioxide.

They also say Lyft can’t have it both ways.

"Clearly, despite the company saying they’re just trying to complement transit, it appears that they’re actually trying to take service and ridership away from transit," said Gina Coplon-Newfield, director of the Sierra Club’s Clean Transportation for All campaign.

"This is concerning," she said. "We need clean transportation choices. And it’s great that people have the option for ride-hailing services, but they should complement, not compete with, transit."

Coplon-Newfield added that she first became aware of the Lyft ads while riding the T, Boston’s subway system. She was offended by the suggestion to "ditch your train in style," as it represented the antithesis of her advocacy for clean transportation.

"Uber and Lyft have pushed the narrative that they can bring people to transit who wouldn’t necessarily have considered transit as an option because they didn’t have a good way to get to a bus stop or a train station," Yanocha said. "So given that, it’s a little bit concerning to see this type of marketing that’s really trying to pull people from transit for their entire trip."

Yanocha said there hasn’t been much data on how transportation network companies (TNCs) like Uber and Lyft affect public transit ridership. But one study by researchers at the University of Kentucky showed they’re having a negative impact.

The study looked at transit ridership across 22 U.S. cities. It found that when Uber and Lyft enter a city, rail ridership decreases by 1.29 percent annually and bus ridership by 1.7 percent.

Gregory Erhardt, a co-author of the study and an assistant professor of civil engineering at the University of Kentucky, said the findings were interesting but not entirely surprising.

"We found that the introduction of TNCs into a market is correlated with a net decline in transit ridership," Erhardt said. "And that reduction gets bigger with each passing year, which we suspect is an indication of the ramp-up period of those services."

He added, "There are a lot of claims and arguments that TNCs support transit ridership. For example, in the evenings, when there’s a transit service, they bring people to and from rail stations. But those are all largely theoretical arguments. When you actually look at the data, these arguments don’t hold true."

Uber ads have also been spotted at public transit stops. But an Uber spokeswoman said those ads are all several years old, and the company has recently been ramping up its commitment to sustainability. She pointed E&E News to a blog post about these efforts.

"Over the last several years, we’ve built lasting partnerships with public transportation agencies around the world," the post says, adding, "We recognize transit and Uber can be a powerful combination."

In response to emailed questions, a Lyft spokesman said the company had not placed advertisements on public transit in months.

The Lyft spokesman noted a partnership with the Seattle Department of Transportation, adding, "Lyft is committed to offering multimodal options to our riders. … The integration of bikes, scooters, and public transit routes in our app is a great example of how we work to offer the best transportation method to riders. We have committed to offset our carbon emissions, and as a result, all Lyft rides are carbon-neutral through the direct funding of emission mitigation efforts."

Uber and Lyft are both moving toward planned initial public offerings. Once the companies are public, shareholder pressure could encourage them to take more aggressive climate action. For instance, activist shareholders could introduce resolutions calling for the companies to further promote electric vehicles.

Lyft last month unveiled Green Mode, which allows riders to select an EV in the app. But the feature is currently limited to Seattle and Atlanta, as other cities lack necessary charging infrastructure.

"We hope to see both Lyft and Uber increasingly invest in electrifying their fleets," Coplon-Newfield said. "We would like to see EVs become a priority and not an afterthought for the business models of the companies, which are both set to go public later this year. But there’s a lot to be done."