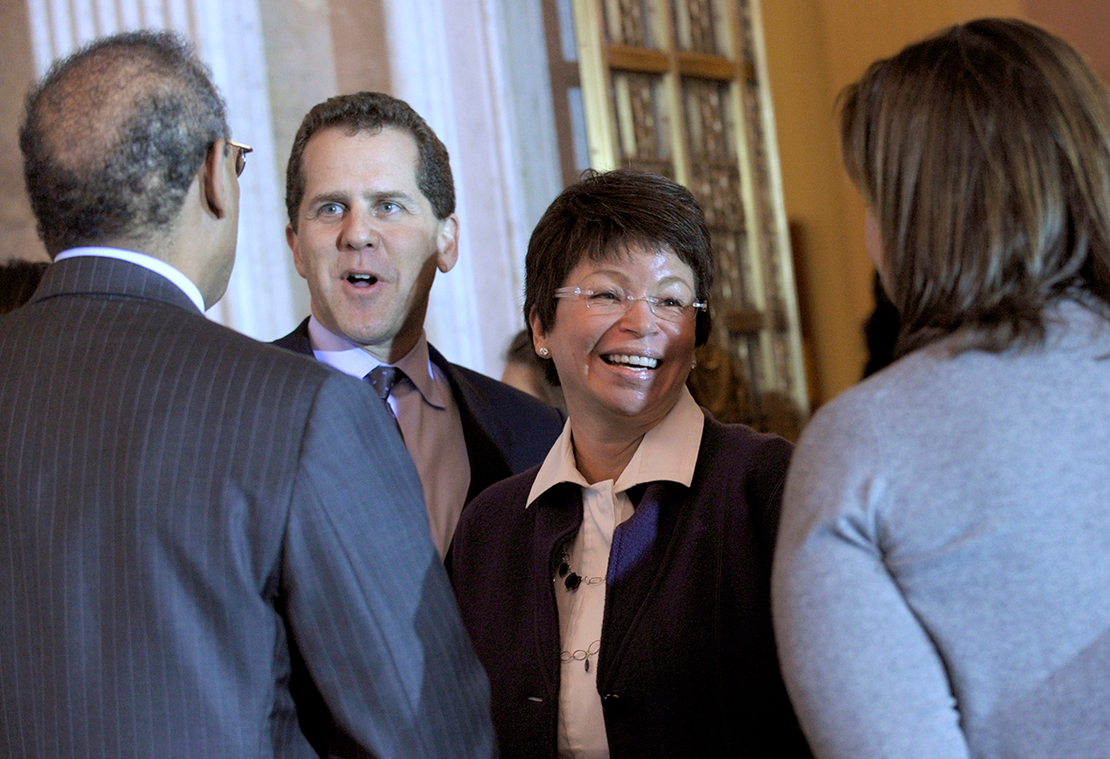 Biden on Friday tapped Michael Barr, an Obama-era assistant Treasury secretary, to serve as the Federal Reserve’s vice chair for supervision. Barr helped craft Wall Street reforms in the wake of the 2007-2009 financial crisis, but he’s clashed at times with progressives. And observers say his record provides little insight into how he would address the financial risk of climate change.

That stands in contrast to Biden’s first pick for the position: Sarah Bloom Raskin, another former Treasury official. Raskin has spoken publicly about the need for financial regulators to face the dangers of a warmer world, and she warned against the Fed pouring money into fossil fuel companies as they crafted a response to the Covid-19 pandemic (Climatewire, Jan. 31).

These positions, however, helped sink her nomination. Democratic Sen. Joe Manchin of West Virginia — a pivotal vote in the narrowly divided Senate — all but ended her bid for the job when he declared his opposition in large part because of Raskin’s previous comments about the financial threats posed by extreme weather events and fossil fuel financing.

Now, Biden is trying again with Barr. And this time, climate activists aren’t saying much.

In private, environmentalists note that Barr has not been vocal about his positions on climate-related risk. That makes it difficult to predict how he would approach the issue.

But they also concede that he appears to be a qualified candidate and that it’s important for Biden to fill the role — and soon. If Republicans gain control of the Senate in November, it will be much more difficult for Biden to put one of his picks on the Federal Reserve.

“The main point is that there needs to be someone there,” said Sarah Dougherty, a former researcher with the Federal Reserve Bank of Atlanta who now directs the Natural Resources Defense Council’s Green Finance Center.

Democrats — including some of the Senate’s most progressive members — are meanwhile publicly voicing support for the nominee.

“The Fed’s Vice Chair for Supervision is a powerfully important financial regulator, responsible for holding the biggest banks accountable and preventing the next financial crisis — and this position should have been filled months ago without political delay,” Sen. Elizabeth Warren (D-Mass.) said in a statement last week.

She added that Barr during the Obama administration was a “key force” in creating the Consumer Financial Protection Bureau, and that she intends to support him for the role.

Sen. Sherrod Brown (D-Ohio), who chairs the Senate Banking, Housing and Urban Affairs Committee, which vets Fed nominees, also said he would back Barr’s nomination. Brown said in a statement that “Michael Barr understands the importance of this role at this critical time in our economic recovery.”

Despite the support from Brown and Warren, it’s too soon to say where other senators will fall.

Manchin, for his part, “hasn’t weighed in here yet,” Sam Runyon, his spokesperson, told E&E News last week. And Sen. Pat Toomey (R-Pa.), the Banking Committee’s top Republican, wrote on Twitter that he has “concerns” about the nomination but looks forward to meeting with Barr (Greenwire, April 15).

A veteran of both the Clinton and Obama administrations, Barr is known for his role as an assistant Treasury secretary, in which he helped craft the Dodd-Frank Wall Street Reform and Consumer Protection Act. The law was passed in 2010 to help prevent future financial crises, including by creating the position Barr is now in the running for, as well as the Consumer Protection Financial Bureau.

The White House also touted Barr’s efforts on the National Economic Council under former President Barack Obama, as a special adviser to former President Bill Clinton and his current role as a dean and law professor at the University of Michigan. Barr also has worked as an adviser for financial technology firms.

The nominee’s roles in government, the private sector and academia have earned him the favor of some, including community development groups, which have applauded his focus on consumer-related issues. Financial regulation experts say he’s qualified for the job, too.

But Barr also has been criticized by progressives who argue that, as the main liaison between Congress and the Obama administration during Dodd-Frank deliberations, he opposed more aggressive measures to crack down on big banks’ risky behavior.

So much so that when Barr emerged last year as a leading contender to be Biden’s next comptroller of the currency — another top banking regulator — advocacy groups quickly came out against him, citing both his work on Dodd-Frank and ties to financial technology companies.

As a result, Biden instead nominated Cornell University law professor Saule Omarova. Her nomination died after Republicans and some moderate Democrats announced they wouldn’t support her, citing her past academic writings and comments about the oil and gas industry (Climatewire, Dec. 8, 2021).

At least one group still has those concerns about Barr — and is willing to vocalize them. The Revolving Door Project, a progressive organization that scrutinizes government officials’ backgrounds, said in a statement last week that Barr “was too close to fintech and cryptocurrency schemers to be the Comptroller of the Currency, and he is still too close to them to be Vice Chair for Supervision.”

Jeff Hauser, the group’s executive director, added: “Placing him at the top of the Fed’s regulatory efforts would also send a cynical message to anyone who hoped Democrats had realized that preserving ‘Too Big To Fail’ after 2008 was a mistake.”

But a number of other groups have stayed silent, including several organizations that have pressed Biden to name progressive nominees to positions of financial regulation. Among the groups that have not commented publicly on Barr’s nomination through either Twitter or a press release are Public Citizen, the Sierra Club and Better Markets.

All three groups did not respond on the record to E&E News when asked for comment.

While that’s a departure from the full-court press that accompanied Raskin’s bid for the position, advocates said they still are optimistic that the Fed is moving in the right direction on climate. Further, they expressed hope that a nominee such as Barr at the very least won’t present too much of an obstacle.

“The staff at the Fed understand that they need to take climate-related financial risk seriously. They recognize that banks face these risks regardless of who is nominated and confirmed to the Federal Reserve,” said Todd Phillips, a former attorney at the Federal Deposit Insurance Corp. who currently directs financial regulation at the progressive Center for American Progress.