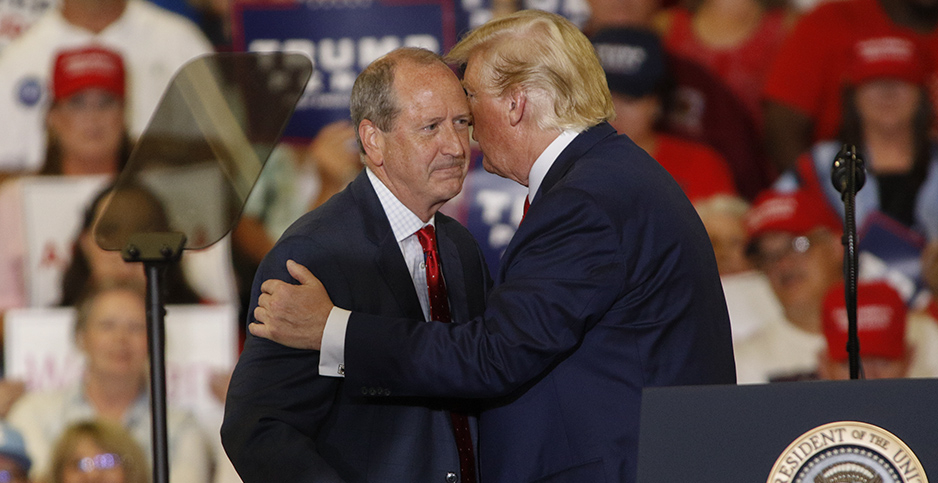 President Trump flew last night to Fayetteville, N.C., in an eleventh-hour appeal to voters ahead of today’s special election to settle the only remaining congressional contest from the 2018 midterms, in which energy issues have been a point of contention.

The 9th District, which stretches from Charlotte eastward toward Fayetteville, will choose between Democratic solar energy entrepreneur Dan McCready — with the strong backing of environmental interests — and Republican state Sen. Dan Bishop.

McCready narrowly lost the election in November to GOP candidate Mark Harris, but those results were thrown out amid allegations of voter fraud. Harris opted not to run again.

"The radical Democrats want to dismantle, demolish and destroy everything that you gained. And they will do it, and it won’t take that long. And that’s why we need Dan Bishop and Greg Murphy; we need them," Trump told the crowd last night in Fayetteville.

"You have a Democrat named Dan McCready. And he wants open borders; he wants sanctuary cities. He’s not going to protect your Second Amendment," Trump continued.

The McCready camp, for its part, blasted Bishop for backing legislation facilitating utility rate hikes and for taking oil and gas money in a state where offshore drilling can be controversial.

Critics of Bishop, main backer of the state’s controversial bathroom bill, also say he supported legislation that was too lenient on Duke Energy Corp. over its coal ash disposal issues.

Polling has been extremely close, with The Cook Political Report rating the race as a "Toss-Up." Trump carried the district by 11 points in 2016.

"I feel like we’re kind of flying blind into this election, because the circumstances are so unusual that I’m not real sure anybody’s got a firm grip as to what might happen come Tuesday," Michael Bitzer, a politics professor at Catawba College in nearby Salisbury, N.C., told E&E News.

"It’s a September general election, held at the same time as the Charlotte City Council primaries. It’s in an odd year," he added.

Since it’s a special election and will likely be seen as an early test for the 2020 elections, the race has attracted national spending and involvement on both sides.

Vice President Mike Pence was also in the district yesterday on Bishop’s behalf and joined Trump in Fayetteville.

National Democrats have mostly stayed away from the traditionally reliable GOP stronghold, but green groups have all donated heavily on McCready’s behalf, as well as run ads supporting him.

The League of Conservation Voters Victory Fund, for one, has spent hundreds of thousands of dollars advertising for McCready, while the organization teamed up with the Sierra Club last month in a bid to mobilize environment-friendly voters to advocate and vote for McCready.

"It is more important than ever that the Ninth District is represented in Washington by environmental champion Dan McCready," Pete Maysmith, the LCV Victory Fund’s senior vice president of campaigns, said in a statement.

"Dan Bishop voted to let big corporations pollute North Carolina’s air and water. He puts special interests over the health and well being of North Carolinians."

EDF Action and EDF Action Votes, both affiliates of the Environmental Defense Fund, said they have spent a combined total of $935,000 on the race.

‘All bets are off’

Bishop’s supporters have tried to label McCready a socialist and an ally to national liberals, including Rep. Alexandria Ocasio-Cortez (D-N.Y.). Bishop himself told The New York Times over the weekend that McCready was "enabled by the far left."

One advertisement from the Club for Growth accused McCready of pushing for a state policy that would have cost consumers $149 million. A group on whose board he sat advocated against a 2015 bill that would have repealed the state’s renewable portfolio standard.

"Dan McCready has already shown that he’s willing to line his pockets at the expense of higher energy costs for North Carolina families, and should he get to Congress, we should expect he’ll do the same for his campaign funders," said Club for Growth President David McIntosh.

The Charlotte Observer labeled the claim "mostly false," taking issue with the cost estimate and the fact that the renewable policy already existed before the group at issue advocated to keep it in place.

Bitzer said the close polling comes as a surprise.

"I have no real sense as to where this could end up, with a district that, in normal political environments, would be a fairly safe Republican seat," he said.

"But with what happened in 2018, with what is happening with the president right now, I think all bets are off in terms of who knows what’s happening on the ground."

Not the only election

Voters along most of the Outer Banks, which comprises the 3rd District, will also be heading to the polls for a special election. They’ll be picking the successor to Rep. Walter Jones (R), who died in February.

Jones had represented the district for more than 20 years. It stretches from the Virginia border to Marine Corps Base Camp Lejeune, and eastward toward Greene County.