Greens hit streets of D.C. to protest as Senate panel waits its turn 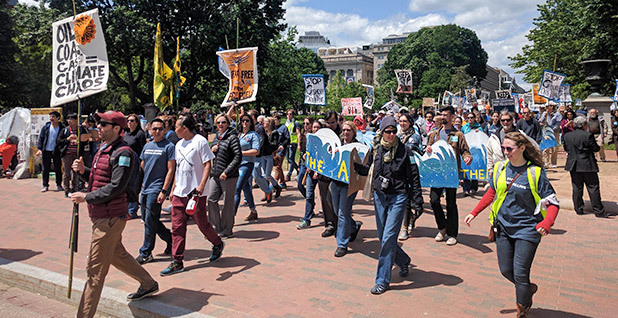 Protesters from an array of environmental groups urged President Obama to halt all offshore drilling during a rally in front of the White House yesterday. Photo by Emily Yehle.

In the debate over new oil and gas leasing, whose voice is the loudest?

Hundreds of activists made the case for the anti-drilling movement in Washington, D.C., yesterday, using drums, songs and chants to protest the Interior Department’s 2017-22 oil and gas leasing program. The program — now in draft form — would allow up to 13 oil and gas lease sales in the Gulf of Mexico and the Arctic.

"The oil and gas industry is shivering in their boots right now," the Rev. Lennox Yearwood Jr. of the Hip Hop Caucus shouted to a crowd carrying elaborate homemade signs and miniature windmills. "It has been shown that organized people beat organized money every single time."

The rally spanned a noisy two hours, beginning in front of the White House and ending at the Lincoln Memorial Reflecting Pool.

It was the latest from the "keep it in the ground" movement, which has brought together dozens of small and large environmental groups that believe new drilling will thwart efforts to keep the global temperature from rising more than 2 degrees Celsius. Greenpeace, the Sierra Club, the League of Conservation Voters, 350.org, the Alaska Wilderness League and many other organizations have led the call to arms.

But this week, another strong voice will speak out against them: the Senate Energy and Natural Resources Committee.

Chairwoman Lisa Murkowski (R-Alaska) is holding a hearing Thursday to "examine the need for the Bureau of Ocean Energy Management to finalize a highly robust offshore leasing program for the years 2017 through 2022," according to committee spokesman Michael Tadeo.

The hearing comes two months after the Obama administration took Atlantic Ocean drilling off the table, after months of grass-roots campaigning from environmental groups (Greenwire, March 15). Now those groups have set their sights on the Arctic.

Tadeo said this week’s hearing will focus on why lease sales in the Arctic are necessary.

"A substantial share of the oil and gas that Americans consume today is available because of [outer continental shelf] lease sales held a decade ago," he said. "That is why the administration’s exclusion of the Atlantic from the 2017-2022 schedule is bad public stewardship — and why it is vital the Arctic region doesn’t receive the same shortsighted treatment."

The proposed leasing program would allow the government to offer leases in the Beaufort and Chukchi seas along Alaska’s northern shores, as well as Cook Inlet in the south.

But the oil price crash has made new offshore drilling uneconomical for the present — and Interior Secretary Sally Jewell has specifically invited public comment on whether Arctic waters "are appropriate for future leasing and how we can protect environmental, cultural and subsistence resources."

Enter yesterday’s rally, which emphasized the plight of communities "on the front line."

Esau Sinnok, an 18-year-old from an Alaskan island in the Chukchi Sea, said his home could be gone in 30 years because of climate change "caused by the burning of fossil fuels." He also argued that an oil spill in the Chukchi could threaten his community’s way of life.

"If that disaster happened in the Arctic, our subsistence lifestyle will be put on hold," he said, emphasizing that his Iñupiaq community in the village of Shishmaref is reliant on the natural resources around it. "Mother Nature is tired of us extracting oil," he said. "We have to keep it in the ground."

Other Alaska Native communities have supported offshore drilling — a point that will likely come up at Thursday’s Senate hearing. Though a witness list was not finalized in time for publication, Tadeo said the committee would hear from "witnesses addressing the planning areas of the Gulf of Mexico, the Atlantic and the Arctic."