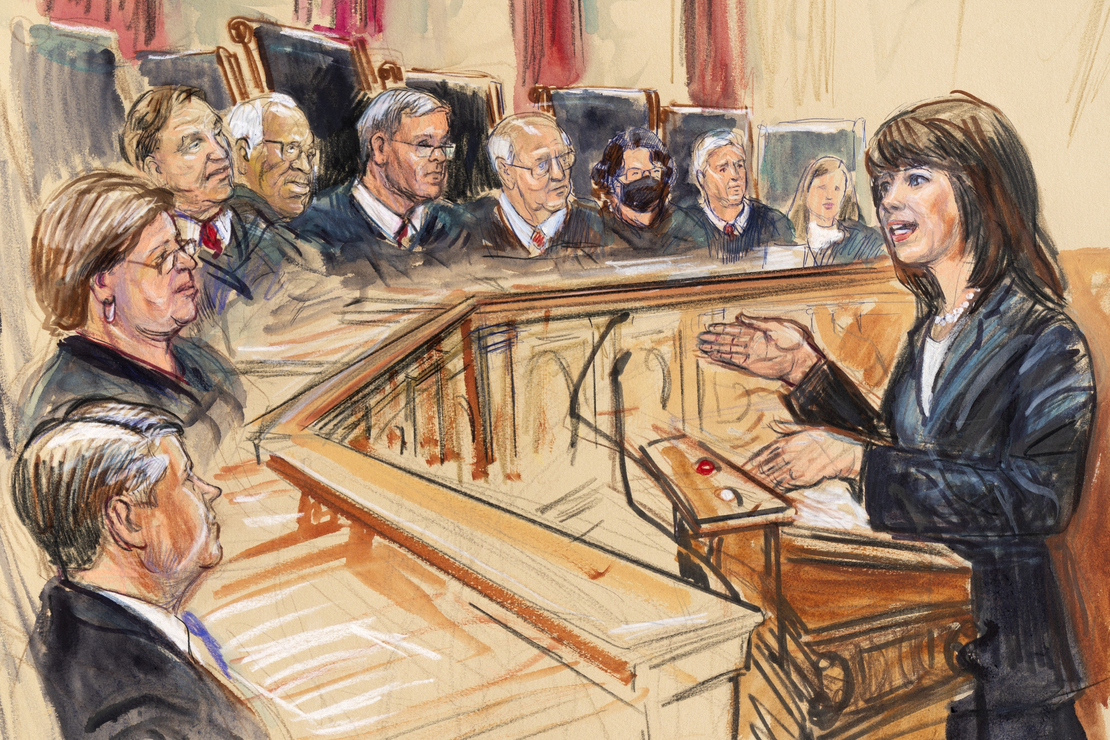 Solicitor General Elizabeth Prelogar, right, presents an argument before the Supreme Court on Nov. 1, 2021, in this artist’s rendering. Dana Verkouteren via AP

Climate advocates are optimistic that the Biden administration will take their side after the Supreme Court on Oct. 3 invited the Justice Department to share its views in a long-simmering procedural fight that could sink nearly two dozen lawsuits asking oil and gas companies to pay up for the effects of a warming planet.

After all, President Joe Biden pledged on the campaign trail to “strategically support” the climate liability lawsuits — a marked change from the Trump administration, which repeatedly backed industry’s effort to quash the cases by moving them to federal court, where companies believe they are more likely to prevail.

Yet seemingly friendly Democratic administrations have disappointed environmentalists in the past, including in one Obama-era Supreme Court case that industry lawyers cite as evidence the climate liability lawsuits should not be allowed to advance.

Indeed, the fossil fuel industry — which has asked the Supreme Court to decide which venue should hear the cases — welcomed the justices’ decision last week to ask Solicitor General Elizabeth Prelogar for the Biden administration’s views on the petition Suncor Energy Inc. v. Boulder before the court decides whether to wade back into the jurisdictional battle (Greenwire, Oct. 3).

Both the Obama and Trump administrations “filed briefs opposing similar climate lawsuits when those cases were before the court,” said Phil Goldberg, special counsel for the Manufacturers’ Accountability Project, an initiative of the National Association of Manufacturers that opposes the liability litigation.

In 2010, the Obama administration stunned environmentalists by urging the Supreme Court in American Electric Power v. Connecticut to toss out a decision by a lower bench that would have allowed states, environmental groups and New York City to sue several of the nation’s largest coal-fired utilities to reduce greenhouse gas emissions.

At the time, Matt Pawa, an attorney representing a coalition of states suing electric power companies, likened the Obama-era AEP brief to being “stabbed in the back.” He called it a “dastardly move by an administration that said it was a friend of the environment” (E&E News, Aug. 25, 2010).

Now, Pawa said, there is still a risk of an industry-friendly stance from the Biden administration in the climate liability cases, but he believes it’s less likely than it was more than a decade ago. For starters, he noted that the federally owned TVA electric utility was one of the defendants in AEP.

There are no government defendants in the flood of climate liability lawsuits that have been filed by cities, counties and states from Rhode Island to Hawaii — only private industry. The cases, filed mostly in state courts, accuse various oil and gas companies of deceiving the public and seek damages for the costs of dealing with climate change.

Pawa said the Supreme Court’s invitation for Prelogar’s input in the Boulder petition presents the first true opportunity for the Biden administration to make its views known.

“They’ve not been involved because these are private law tort cases. We’re not dealing with the Clean Air Act or something for which the administration has responsibility for administering,” Pawa said, adding that he believes the Biden team sees the cases “as a welcome addition to the legal regime of the United States on climate and holding companies responsible and making them pay.”

There is also a lot more information available in 2022 than there was in 2010 about the risks posed by rising global temperatures, said Pawa, now a partner at the firm Seeger Weiss LLP.

“The world’s a lot different than it was then; the country is different,” Pawa said. “The scale of the climate crisis has the Biden administration taking action and paying attention to climate to a much greater degree than the Obama administration ever did.”

The solicitor general’s position has traditionally carried considerable weight with the Supreme Court, so much so that the person in the role is often referred to as the “10th justice.”

Yet a brief from Prelogar against the oil and gas industry in the Boulder petition would mark a reversal in the federal government’s position in the climate liability cases — a move the solicitor general’s office does not take lightly.

In Boulder, the Supreme Court is considering whether to review a federal court ruling that applied the Baltimore decision to find that a lawsuit from Colorado municipalities against Suncor, Exxon Mobil Corp. and other companies still belonged in state court (Climatewire, June 9).

It takes the vote of four justices to grant a Supreme Court petition. Most petitions are rejected, but support from the solicitor general’s office can sometimes tip the scales in favor of a grant.

Biden’s DOJ, however, has so far stayed out of the climate liability cases, even as the chief lawyers in a half-dozen blue states, Senate Democrats and lawmakers from Biden’s home state of Delaware have called on the administration to get involved.

Supporters of the cases have argued that the oil and gas industry is using the Trump-era position to bolster its arguments in efforts to quash the lawsuits (Climatewire, March 31).

The government’s current position on the climate liability cases — barring a contrary argument from the Biden administration — was detailed in a November 2020 brief by Trump-era acting Solicitor General Jeffrey Wall in the Baltimore case. He sided with BP, Exxon and other companies in asking that a climate lawsuit filed by the Charm City be fully reexamined and moved to a federal court.

The Supreme Court in 2021 sided with the companies and the Trump administration. Since that time, however, federal appellate judges, including those that took a second look at Baltimore’s lawsuit, have since ruled that the cases belong in state court (Climatewire, April 8).

Jonathan Brightbill, principal deputy assistant attorney general of DOJ’s environment division under Trump and a co-author of the administration’s Baltimore brief, noted the solicitor general’s office includes career professionals who, “generally speaking, like to be right.”

He said the Obama administration’s 2010 AEP brief was in line with the Supreme Court’s opinion the following year. In the 2011 decision authored by Justice Ruth Bader Ginsburg, the court unanimously found that the Clean Air Act displaced any federal common-law right to seek a reduction of carbon-dioxide emissions from fossil fuel-fired power plants.

Oil industry lawyers have argued the AEP ruling bolsters their arguments against state common-law claims in the climate liability cases.

“Anyone who was a true practitioner of the kind of analysis that the Supreme Court engages in knew that answer was unambiguously the right answer,” Brightbill said. “That happens from time to time.”

While the solicitor general typically holds special sway before the Supreme Court, Brightbill said the office under Biden has been striking out with the justices.

For example, he said, Prelogar reversed the Trump administration’s stance on a California regulation that allows union organizers to enter property to speak with workers. The Supreme Court later sided with a strawberry grower in the state who claimed union organizers violated his property rights when they came on his farm to recruit workers (E&E News, June 23, 2021).

Brightbill said the Biden administration has leaned on his solicitor general to “take more aggressive positions,” resulting in an office “more willing to take the wrong position on account of politics than was previously the case.”

But Prelogar also faces a Supreme Court that has shifted sharply to the right since conservative justices achieved a 6-3 majority in late 2020.

Robert Percival, director of the environmental law program at the University of Maryland, said the AEP case was markedly different from the climate liability litigation because in the earlier case, municipalities were not seeking damages for climate change but asking the courts to regulate greenhouse gas emissions.

That regulatory authority, the Supreme Court found in AEP, rests with EPA.

“And given that some of those sources were owned by the federal government through the Tennessee Valley Authority, it’s kind of understandable that the government said what it did,” Percival said.

He said the current crop of climate litigation lawsuits allege “garden-variety state law fraud claims” that oil and gas companies misled consumers about climate change and that the communities should be compensated for the costs of flooding and other climate impacts.

Percival noted there is no remedy in federal law for climate change damages and said he believes DOJ will find the cases belong at the state level — as every federal appeals court has found.

“This is not an effort to try to get overarching national regulations controlling emissions, but rather to compensate for harm caused by fraud,” he said.

Percival suggested the request for the Biden administration to weigh in on the Boulder petition may indicate that the court is reluctant to intervene again.

“The Supreme Court has a pretty long history of staying out of state court litigation, whether it reaches liberal or conservative results,” Percival said.

He noted that when California successfully sued the manufacturers of lead-based paints, the high court declined to intervene — even after the Golden State won a large judgment.

Niskanen Center chief counsel David Bookbinder — who said in 2010 that the Obama DOJ’s stance in AEP “reads as if it were cut and pasted from the Bush administration’s briefing” in another high-profile climate case — said he expects Biden officials to argue that the climate liability lawsuits belong in state court.

Bookbinder represents Colorado municipalities suing Suncor and other companies in the Boulder case.

“Given that the president has personally expressed his support for these cases,” Bookbinder said, “we are confident that the solicitor general will advise the court that there is no reason for them to take up this or any of the other climate nuisance cases.”