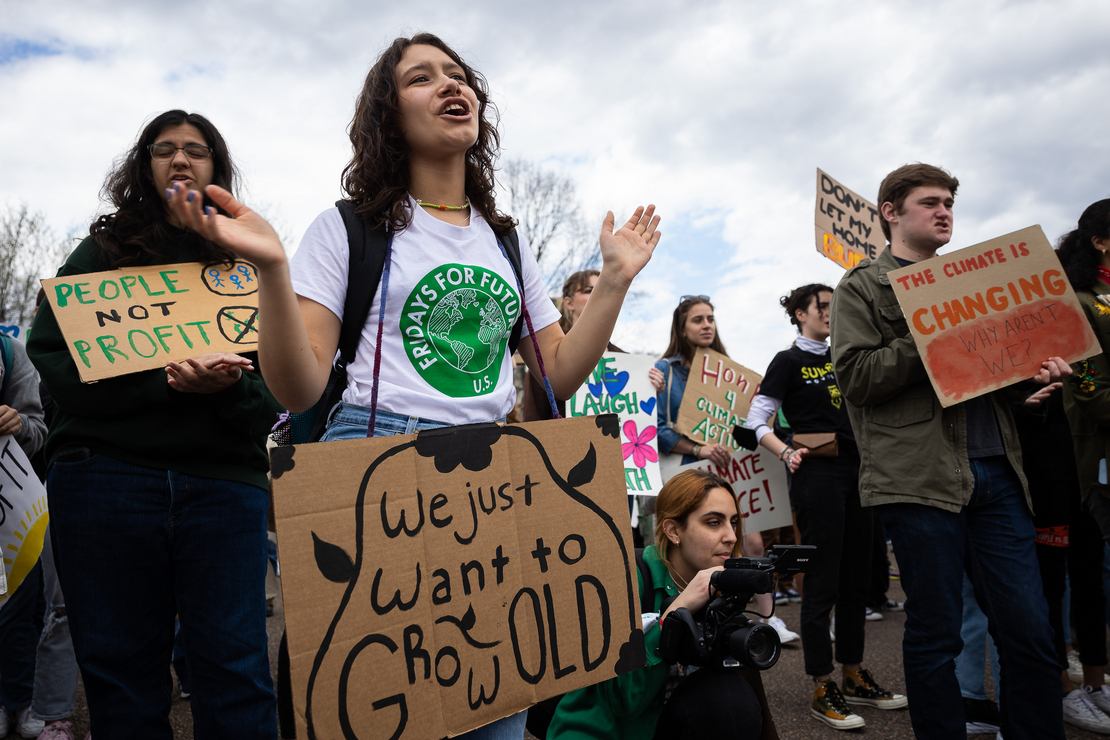 A March protest in Washington for action against climate change. Francis Chung/E&E News

The organizations, which have been pushing for a year and a half for major climate legislation, welcomed the news and took credit for pressuring Manchin and Majority Leader Chuck Schumer (D-N.Y.), who negotiated the deal, dubbed the “Inflation Reduction Act of 2022.”

“Wow! We are so excited that Majority Leader Schumer and Senator Manchin have reached a deal that includes climate investments to reduce carbon emissions by roughly 40 percent by 2030, and we are eager to see the details,” Tiernan Sittenfeld, the League of Conservation Voters senior vice president for government affairs, said in a statement.

“This is it: the time for the Senate to pass cost-saving legislation that makes overdue investments in climate and clean energy, improves our energy security, creates good jobs, and builds a more affordable, healthy, just, and equitable future is right now.”

Jamal Raad, who leads Evergreen Action and previously called for Manchin (D-W.Va.) to lose the Energy and Natural Resources Committee gavel, said the deal “presents the opportunity for a major breakthrough in America’s fight against climate change” and “has the potential to be the single largest investment in clean energy in American history.”

Friends of the Earth claimed some credit on climate activists’ behalf for the deal.

“Protections for communities on the front-lines of fossil fuel pollution should always take precedence over the expanding wish list of a corporate-backed coal baron. We are counting on Democratic leadership to stand firm against an unjust and doomed ‘all of the above’ energy strategy,” he said.

Some of the congressional staffers who protested and got arrested earlier this week in Schumer’s office to push for climate policies also took credit.

“Our first demand was to reopen negotiations and we did it!” tweeted Saul Levin, an aide to Rep. Cori Bush (D-Mo.) who participated in the demonstration.

“We still need details … but this in itself is a huge win,” he said. “Now we need to make the climate bill as strong as possible and pass that ASAP. Let’s get it!”

“DIRECT ACTION GETS THE GOODS,” tweeted Emma Preston, an aide to Rep. Ro Khanna (D-Calif.) who also protested. “Climate is back on the table, baby.”

Food & Water Action, on the other hand, slammed the deal.

“After dragging his feet for more than a year, Senator Manchin announced an agreement that won’t solve the crisis, and may make it worse. The few details released this evening suggest this deal will prop up fossil fuels and promote the various false climate solutions beloved by industry,” she said.

The deal includes Democratic leaders promising to pursue reforms “essential to unlocking domestic energy and transmission projects, which will lower costs for consumers and help us meet our long-term emissions goals,” according to a summary.

That raised alarms for Brett Hartl, government affairs director with the Center for Biological Diversity.

“We have no idea what they’ve agreed to,” he said. “They might not know.”

Pica of Friends of the Earth called on “Democratic leadership to stand firm against an unjust and doomed ‘all of the above’ energy strategy.”

Other environmentalists stressed the significance of the moment.

“There had to be a deal struck here across the Democratic caucus,” said Sam Ricketts of Evergreen Action. “That deal is here.”

“Nerds on both sides have been trying to set this process free for decades,” he said of environmental review. “Politicians keep getting in the way. Let’s hope that doesn’t happen this time around.”

Abigail Ross Hopper, president of the Solar Energy Industries Association, said the deal is “significant and represents a major opportunity to relieve the inflation pinch on families and tackle the climate crisis.”

But the National Association of Manufacturers, which takes consistently pro-fossil-fuel positions, was harshly critical of the proposal to raise some corporations’ taxes.

“This proposal is nothing more than a repackaging of the same bad ideas with a new name slapped on it. It is especially harmful because it will undermine manufacturers’ competitiveness at a time when the industry is reeling from supply chain disruptions and record inflation,” said NAM President Jay Timmons.

“Raising taxes now will hurt manufacturers’ ability to keep delivering for our people and mean fewer opportunities for Americans already worried about their financial future.”

The Manchin and Schumer deal isn’t changing protesters’ plans to disrupt today’s Congressional Baseball Game for Charity. Reilly Polka, a spokesperson for the groups organizing it, told E&E News it will still happen at Nationals Park in Washington (Greenwire, July 27).

The lawmakers playing in the game, which pits Republicans against Democrats, aren’t on board with the protesters’ actions.

“Everybody thinks they’re idiots,” Rep. Rodney Davis (R-Ill.), a longtime player for the GOP team, told E&E News. “This game raises a couple of million dollars for local D.C. charities, the underprivileged … and they want to destroy this game. What point are they going to prove?” he asked of the protesters.

“There’s nobody who’s been sounding the alarm bell more than me and some of my colleagues on the climate crisis,” she said.

But if the protesters oppose the game, count Barragán out.

“The messaging that I got — I don’t know if it’s accurate or not — is that we shouldn’t have been playing a congressional baseball game, and that is something I don’t agree with,” she said.