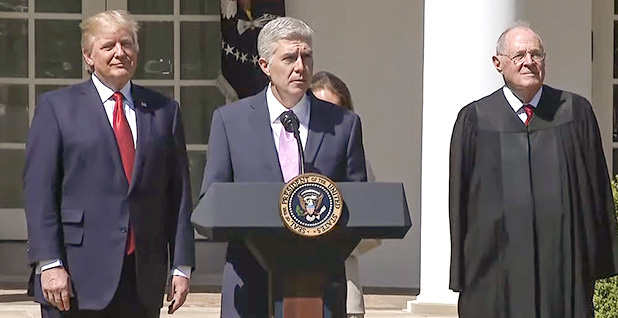 Justice Neil Gorsuch (center) is sworn in yesterday as the newest member of the Supreme Court. Photo courtesy of the White House.

The ascension of Justice Neil Gorsuch to the Supreme Court is alarming for the legal future of environmental causes though ultimately minor in the short term, according to advocates, who are taking a cautiously skeptical stance on the court’s newest member.

Gorsuch was sworn in yesterday morning, first in a private ceremony at the court, then at the White House, where Justice Anthony Kennedy presided.

The court is scheduled to hear a series of cases next week, but it will take far longer for Gorsuch’s work to ripple through the realms of climate and environmental law, environmentalists say.

"It’s not going to change a whole lot in the short term," Joanne Spalding, chief climate counsel for the Sierra Club, said in an interview.

Attorneys and representatives at environmental advocacy groups, including the Sierra Club, the League of Conservation Voters, Greenpeace and WildEarth Guardians, said Gorsuch’s presence on the court has not altered their legal work or prompted their organizations to shift course in how they conduct public outreach or launch campaigns.

"It does not change the work that we’re doing," said Desiree Tims, judiciary program director for the League of Conservation Voters. "His confirmation is fresh and was something that was foreseeable."

Jason Schwartz, a Greenpeace spokesman, said Gorsuch’s arrival doesn’t significantly affect the group because it generally organizes its campaigns at the local and state level and isn’t as litigious as other conservation organizations.

"Gorsuch is not central to our campaigns and strategy," Schwartz said in an interview, calling the justice a portion of the "pretty unsurprising parade of craziness coming out of the Trump administration."

Enviros’ eyes are on the lower courts

Gorsuch, 49, is the second justice of the court from Colorado, after Byron White — a nominee of President Kennedy’s — and could be a consistent conservative-leaning vote for decades.

Environmental advocates privately acknowledge deep concerns about Gorsuch and the opportunity for President Trump to nominate conservative justices who would lock the court into a consistently right-leaning body for a generation. Still, they also argue that the scale of the federal court system and the exclusivity of the Supreme Court work in their favor. And they say the court’s history on climate cases is encouraging, too.

Tims said she will be closely watching the courts below the Supreme Court, which finalize the bulk of judge-made law.

"Really, the focus should be on the lower courts," Tims said. "They get to dip their hand in the candy jar first."

Federal district courts received about 290,000 civil cases last year and terminated roughly 260,000, while slightly fewer than 372,000 remained pending, according to recent figures compiled by the Administrative Office of the U.S. Courts. Those figures exclude appeals courts that hear federal cases.

By contrast, the Supreme Court hears about 80 cases a year.

"The Supreme Court, sure, they take on some high-profile cases," said Jeremy Nichols, climate and energy program director for WildEarth Guardians, which files lawsuits about wildlife, natural resources and endangered species in Western states.

"But more often than not, the cases we bring end up in district court, and that’s where they end," he said.

What role for SCOTUS on climate?

As a lower court judge, Gorsuch had a history of favoring companies to the exclusion of citizens and criticizing people who file environmental protection cases, Gallagher told senators.

"A pattern has begun to emerge from Judge Gorsuch’s opinions that suggests he disfavors lawsuits brought by citizens and environmental nonprofits and will find ways to shut the courthouse doors on them," Gallagher said in his opening remarks.

Earthjustice, an active player in environmental protection cases, leveled a similar critique at the justice in a letter last month.

"Judge Gorsuch is an opponent of litigation in the public interest, even suggesting in an article written for the National Review that groups seeking to defend their constitutional rights — to marriage equality, for example — are ‘addicted to litigation’ and should seek recourse at the ballot box rather than the courts," it reads.

Yet in an interview, Gallagher said the top court’s role in climate law will likely be negligible in the immediate future.

The court may get one or two cases about climate change a year, he said. "So the court is not going to dictate the future of climate cases or clean energy," he said.

Two of the most important lawsuits about climate change — one about U.S. EPA’s Clean Power Plan and another on a rule of the agency’s that would require climate standards for new fossil fuel power plants — are before the U.S. Court of Appeals for the District of Columbia Circuit.

"At this point, speculating about those cases is too early," Spalding said, adding that even if Gorsuch gets a chance to weigh in on those disputes, "We think we can win a majority of the court if it comes to that."

In a 9-0 finding for the UARG case, the court said U.S. EPA had overstepped its bounds to some extent but retained its legal rights to regulate greenhouse gases depending on context.

Justice Antonin Scalia, the fiery judge Gorsuch now replaces and someone whose legal legacy Gorsuch has often said he deeply admires, wrote the opinion in that case.