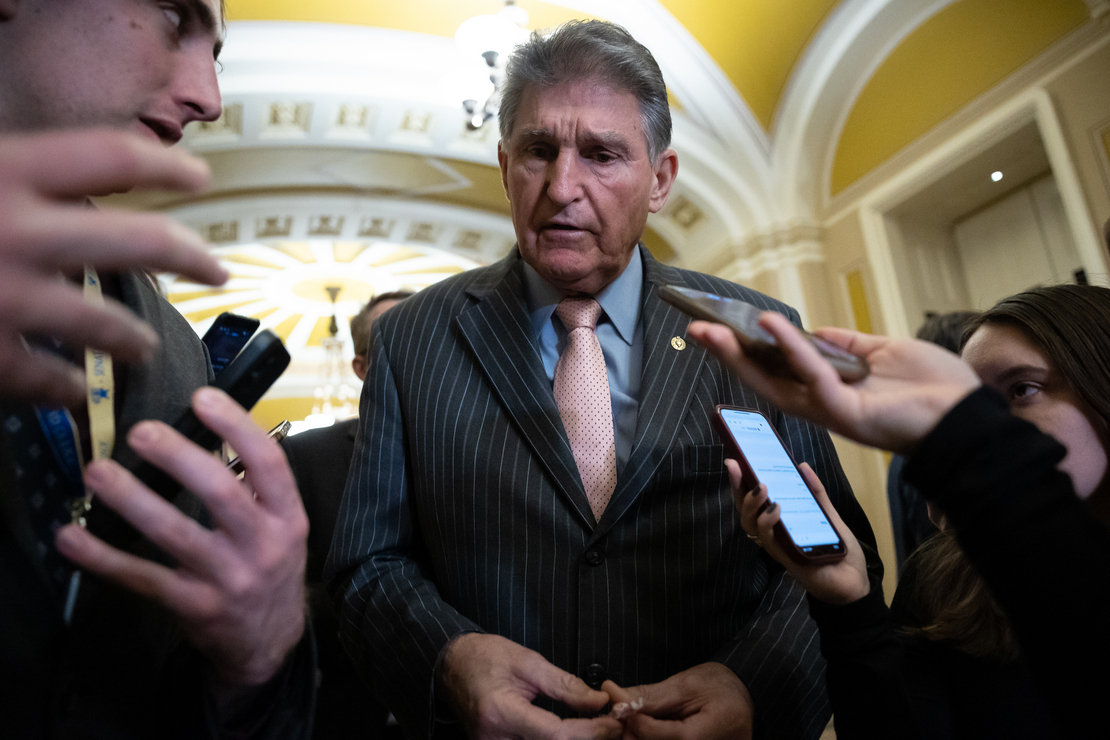 In a letter to President Joe Biden on Friday, the League of Conservation Voters and more than a dozen other groups said the federal agencies could take actions that “would not undermine existing environmental protections and requirements for public engagement and input.”

“There are numerous, non-damaging administrative actions and approaches to encouraging these projects necessary to meet the U.S. commitment to 50-52 percent reductions in climate pollution over 2005 levels by the end of this decade,” they wrote.

It’s the latest pressure point in an ongoing debate within the Democratic Party about how and whether to overhaul environmental rules so that renewable power developers can fully take advantage of the massive suite of subsidies enacted in the Inflation Reduction Act. The missive offers a window into how the party’s backers in the environmental community are thinking about the issue.

Manchin, the West Virginia Democrat who chairs the Energy and Natural Resources Committee, has been pushing a package of reforms that would address transmission backlogs and authorize the contentious Mountain Valley pipeline.

Democratic leaders agreed to try to attach it to must-pass legislation in exchange for Manchin’s vote on the Inflation Reduction Act in August. The White House has supported his effort as well.

But it faced vociferous opposition from environmental groups, who have long despised the Mountain Valley pipeline and believe the bill would go too far in speeding up fossil fuel projects.

Manchin has failed several times to get it onto spending bills and the annual defense authorization measure, despite resistance from congressional progressives. It failed in a 47-47 vote on the Senate floor Thursday, but it’s possible Manchin could make a push to attach his bill to the omnibus spending package this week.

The letter suggests, among other things, that the administration take full advantage of new backstop transmission siting authority at the Federal Energy Regulatory Commission enacted as part of the bipartisan infrastructure law.

“While the rule could be strengthened, even if finalized as proposed, FERC’s new rules would help eliminate bottlenecks caused by current transmission planning processes and long queues in the existing inefficient, slow generator interconnection processes currently run by grid operators,” the groups wrote.

“These additional resources should help boost the speed of review in the permitting process and the depth of engagement with the public and local communities potentially affected by projects,” they wrote. “Early and meaningful engagement leads to better projects getting completed faster.”

They also remain wary of any effort to keep Manchin’s bill alive in the omnibus.

In a separate letter to congressional leadership Saturday, LCV, Friends of the Earth and a long list of other progressive organizations said the bill “prioritizes the interests of the fossil fuel industry at the expense of the environment and health of frontline communities.”

“Congress should instead be advancing efforts that ensure robust public engagement early in project development and strengthen the requirements for agencies to evaluate cumulative health and climate impacts,” they wrote. “Members of Congress must reject all attempts to include any version of the Building American Energy Security Act in the year end government funding package.”

Manchin, for his part, has pinned much of the blame on Republicans, who joined a handful of progressive Democrats in sinking his bill on the Senate floor last week.

“I believe anyone who voted against permitting reform has failed to act in the best interest of our country as they dismissed the opportunity to strengthen our nation’s economic and energy security,” Manchin said in a statement Thursday.