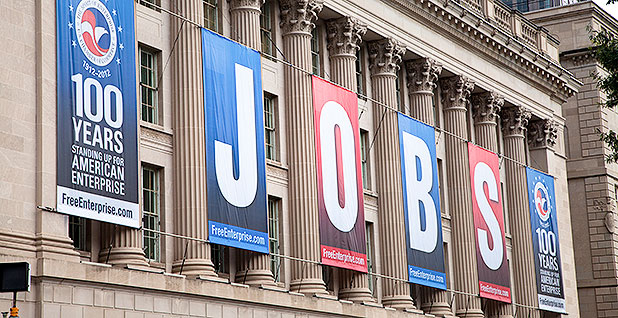 During the Obama administration, the U.S. Chamber of Commerce building featured the word "jobs" on its facade, but critics wonder whether the group is truly committed to boosting renewable energy. Photo by Almonroth, courtesy of Wikipedia.

This year, the U.S. Chamber of Commerce has released statements favoring the repeal of the Interior Department’s coal mining Stream Protection Rule, and praising the Dakota Access and Keystone XL oil pipelines.

When it comes to renewable energy, a recent Chamber blog post about solar energy touts its growth but criticizes state policies that encourage people to install photovoltaic panels by allowing them to sell utilities their excess power.

"While the proponents of rooftop solar may get all the attention, it is really America’s utilities that are leading the way with the proliferation of solar use," the blog said.

Even though the Chamber — and its Institute for 21st Century Energy — has been talking more about cleaner power sources, critics and even some business leaders say the group appears to be more in sync with the interests of fossil fuels and utilities.

"We have been very disappointed in some of the rhetoric that has gone into some of the blogs," Dan Whitten, spokesman for the Solar Energy Industries Association, said during a recent interview.

Chamber leaders say they don’t believe it’s an "either-or" issue "whether referring to specific sources of energy, or the question of improving the environment versus utilizing energy sources," said the business group’s spokesman, Matt Letourneau.

"They now have some window dressing about renewables," he said. "But then you actually look at what they are doing, and they have never supported anything that would be helpful to the renewable industry."

Letourneau rebutted that statement, pointing to Chamber actions over the years that have benefited renewables, including backing the production tax credit. The American Wind Energy Association cheered the move in 2012.

Still, the Chamber is among many groups that sued U.S. EPA over power plant greenhouse gas limits, which would have encouraged the growth of renewables.

Several companies have quit the Chamber because of its stance on climate action, including one of the world’s largest, Apple Inc., in 2009.

Last year, Greenpeace noted that electronic giant Intel Corp. criticized the "negative position on federal climate legislation" from the Chamber and the National Association of Manufacturers.

Also last year, several Democratic senators, including climate hawk Sheldon Whitehouse of Rhode Island and liberal firebrand Elizabeth Warren of Massachusetts, released a report accusing the Chamber of being out of step with its members.

"I guess it must reflect an overwhelming balance in their membership toward traditional fossil fuels," said Whitten, who used to be a top communications aide for America’s Natural Gas Alliance. The Chamber has been bullish on the growth of gas production.

‘Show me the money’

Dudis described the chamber, under current CEO Thomas Donohue, as staking out strategies and political positions that can help the organization’s cash flow.

"Tom Donohue has been very clear that the Chamber goes where the money is," said Dudis, noting a plaque on Donohue’s desk that, according to a New York Times profile, says, "Show me the money."

"We have to raise $5 million a week to run this place," Donohue told the Times in 2013. The article noted the Chamber’s precarious finances before Donohue took over in 1997.

Renewable sources of energy have been growing exponentially. But Dudis said, "The Exxons and Chevrons still have more money to throw around."

The Chamber, like the fossil fuel industry, has become more reliably Republican, critics argue, turning away from more bipartisan outreach.

The group went from supporting the Clinton administration’s health care reform effort during the early 1990s to now giving its backing mostly to GOP candidates, according to a review of campaign finance records.

The Center for Responsive Politics said the Chamber spent more than $100 million on lobbying in 2016, more than $300,000 in campaign contributions — only roughly $10,000 of which went for Democrats — and more than $29 million in outside political spending.

The Times profile said Donohue was a registered independent. His repeated commitment to free enterprise and fewer regulations, however, puts him closer to the Republican mainstream.

Karen Harbert, CEO of the Chamber’s Institute for 21st Century Energy, worked as Department of Energy assistant secretary for policy and international affairs during the George W. Bush administration.

When the U.S. Green Chamber of Commerce launched in 2011, founders saw it as a chance to capitalize on what they saw as the other chamber’s reluctance to fully embrace the green agenda.

"At one time, businesses that focused on sustainability and clean energy did not have a voice in traditional/mainstream business organizations and chambers," CEO Michelle Thatcher wrote in an email.

"And those traditional organizations certainly do not represent the sustainability-focused economy and the companies that are driving it," she said.

The U.S. Green Chamber, which grew out of the Green Chamber of San Diego County in California, has more than 1,000 members, Thatcher said. They include companies that focus on clean energy and large diversified corporations.

A 2011 article in Fast Company identified firms like Toyota Motor Corp. and the Kimpton Hotel & Restaurant Group Inc. as being involved.

The U.S. Chamber of Commerce remains much larger, claiming to represent the interests of more than 3 million businesses, according to the group’s website. Thatcher doesn’t think many of their affiliates overlap.

She said the U.S. Chamber of Commerce’s agenda is not sustainable and will cripple the economy, "in addition to the devastating effects they will have on our natural environment and our population’s health and well-being."

She added: "We are NOT in alignment with their energy and environmental platform and are very grateful to be able to provide a different option for the business community."

The Solar Energy Industries Association, which supports both Republicans and Democrats and benefits from some U.S. Chamber policies but chafes at others, is remaining a member.

"We are a proud member of the business community. We are increasingly becoming a part of the energy mainstream," Whitten said.

Letourneau said the Chamber’s fight for less regulation and free enterprise benefits all its members, not just fossil fuel developers.

"One of the areas that is particularly relevant today is our focus on the inability to site and permit facilities of all kinds, including renewable projects, which we see as a major impediment to economic growth," he said.

Letourneau said that the Chamber’s focus on rolling back regulations affecting coal, oil and gas — the latter of which, he points out, has helped reduce carbon emissions — is because of the past administration’s anti-fossil-fuel agenda.

"Over the past eight years, traditional energy sources have been under assault and seen their potential limited through federal regulations and executive orders," he said.

"The U.S. Chamber is an advocate for market-driven solutions that provide affordable and reliable energy, which is why we’ve pushed back on some of these economically harmful rules."

Still, Whitten would rather not see the Chamber take such a negative view of policies like net metering, which allows people to make money from installing solar power.

Regarding claims the practice hurts consumers, Whitten said, "We have considerable consumer protection materials that we would happily share with them."

He said, "There is some sense you can force positive change through engagement. We would just like them to be energy agnostic."

Dudis doesn’t see it happening — yet. "I do think Donohue leaving is a big piece of that," he said. "I can’t see it changing while he’s still there."