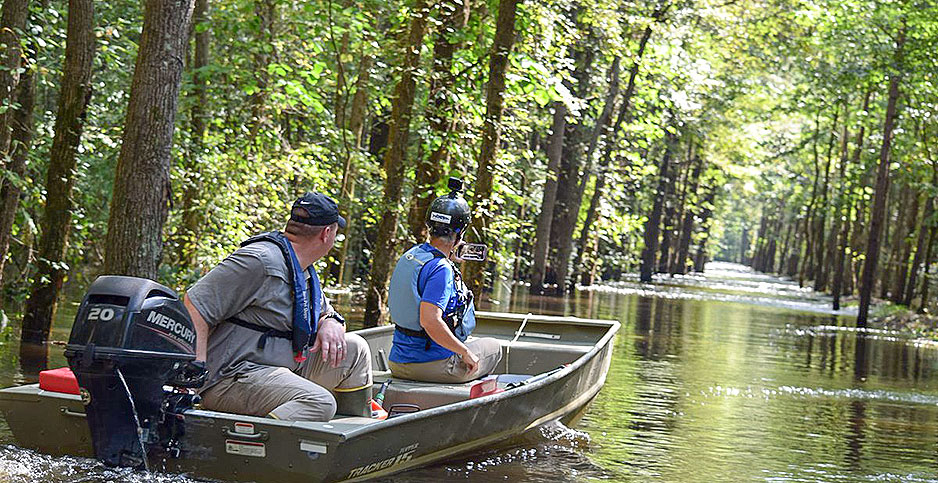 Scientists with Waterkeeper Alliance navigated floodwaters from the Neuse River last week as they collected samples and looked for coal ash releases from the flooded H.F. Lee plant near Goldsboro, N.C. @Waterkeeper/Twitter

When Hurricane Matthew hit the Carolinas two years ago, floodwaters threatened all coal ash pits along the Waccamaw and Neuse rivers. But the utilities that owned the Grainger Generating Station and H.F. Lee Plant responded very differently.

Coal ash can contain mercury, cadmium and arsenic, and Santee Cooper had already been working to remove it from its Grainger site near Conway, S.C., when Matthew hit. After the storm, the utility sped up the process, which will be completed by the end of the year.

Duke Energy Corp., however, stuck to its excavation schedule at the H.F. Lee Plant near Goldsboro, N.C., where no coal ash has been removed to date. Prior to Florence, the utility didn’t deploy tools like AquaDams or sandbags, counting instead on vegetation to hold the ash in place.

Environmental groups say the utilities’ responses to both storms are indicative of their overall approach to coal ash removal. While Santee Cooper and Duke are both working under settlement agreements, Santee Cooper, environmentalists say, has been proactive, while Duke had been sluggish.

Duke spokeswoman Dawn Santoianni said it is not fair to compare one utility’s hurricane response to another’s.

She noted that the coal ash ponds at H.F. Lee are low-lying, and the Neuse River reached flood levels of more than 20 feet after Florence. "If the water is 20 feet higher than normal, sandbags aren’t going to help you," she said.

Though the pits released coal ash during Hurricane Matthew, she said, "there was such a small amount displaced that it wasn’t considered an environmental concern at the time," so Duke did not take any extra precautions for Hurricane Florence.

Environmental groups sparred with Duke and state regulators over the amount of coal ash released following Matthew. While state inspectors said the materials released would fit in the bed of a pickup truck, groups like the Waterkeeper Alliance said damage was more substantial.

Noting that Florence was a larger storm than Matthew, Holleman said Duke should have been more prepared.

"They just let the world run over it," he said. "They’ve done nothing to prevent the community and the river from that risk that was realized two years ago. They just repeated the same thing."

By contrast, the actions of Santee Cooper, South Carolina’s state-owned electric and water utility, are paying off for both the utility and the surrounding community.

Near Conway, fears were growing throughout the week that the Waccamaw River, cresting at historic levels in the wake of Hurricane Florence, would overtop a pit near the now-defunct Grainger power plant holding 200,000 tons of coal ash.

But a temporary dam Santee Cooper installed at the site held off the rising river, which has hit its peak today at about 21 feet, a historic level. Without that additional 30 inches provided by the dam, the utility said, the Waccamaw would already be flowing into the pond and mixing with hundreds of thousands of tons of coal ash.

Both Santee Cooper and Duke are working to remove coal ash from unlined pits as part of legal settlements with environmental groups.

The Southern Environmental Law Center sued Santee Cooper in 2012 to force the utility to remove coal ash from the Grainger site, and the utility agreed in a settlement one year later. What’s more, Santee Cooper said it would excavate all the coal ash pits it owned.

"It really is a winning solution for everybody," Gore said. The utility sells the coal ash to companies that mix it into cement, rendering it nontoxic. "It gets it out of the landfills and reduces any environmental risk to the community, and it provides jobs," she said.

Holleman said Santee Cooper "did oppose us for some time" but was swayed by attending community meetings about coal ash.

"They listened to the concerns of the surrounding community once people became aware of the risks of the coal ash site," he said.

SELC filed a lawsuit against Duke around the same time, but the utility fought back. Duke agreed to excavate coal ash at eight of 14 power plants in 2015, but only a year after one of its other coal ash ponds spilled more than 30,000 tons of waste into the Dan River near Eden, N.C.

Holleman said he blames Duke for fighting the lawsuit and said flooding from Hurricane Florence would not have been as concerning if the utility had already started excavating its coal ash, as Santee Cooper had done.

"Duke lost precious time while it was litigating and lobbying," he said. "As a result, there was still coal ash present to be washed away into the Cape Fear and Neuse rivers."

He also blamed Duke for not moving to expedite its excavations after Hurricane Matthew demonstrated flood risk at some of its coal ash pits.

"The governor has called this a new normal, where we have a 1,000-year flood every couple of years, and yet Duke resists changing," he said.

Santoianni said the utility is already working on "an aggressive schedule" to excavate coal ash at eight of its 14 sites. The company has not yet started excavating coal ash at H.F Lee, and can’t do so, she said, until it builds a reprocessing plant to turn the ash into cement. That work is not required to be completed for another decade.

"That’s the driver for the schedule right now because we have to process the ash," she said. "If we excavated now, there’s no place for it to go."

Duke has already started excavating coal ash at its L.V. Sutton Power Station on the Cape Fear River and is expected to complete the process in 2019. There, river water flowed into a cooling pond and into coal ash ponds. Duke had taken steps to lower water levels within those coal ash ponds to make room for additional floodwaters.

But some of the excavated material was placed in a lined landfill on-site. One wall of that landfill eroded from Florence’s heavy rainfall, releasing a coal-combustion byproduct called cenospheres, which are made of silica and alumina.

"We were as prepared as we could be and believe our aggressive closure work has been instrumental in positioning us in advance of a historic weather event," Duke spokeswoman Shannon Brushe said of the Sutton site.

Duke plans to "vacuum up" any cenospheres spilled at either the Sutton or Lee sites after floodwaters recede, according to Brushe.

She also noted that a steel wall around one of Sutton’s coal ash ponds is still in place even though Florence surpassed Hurricane Matthew’s flooding at the site.

"I’d call that being prepared for what ended up being the worst of the worst," she said.

Earlier this week, Donna Lisenby, a global advocacy manager for the Waterkeeper Alliance, set out on a 22-foot Carolina Skiff called the Tidal Boar to witness firsthand what was happening at the Grainger site and to check the health of the Waccamaw River.

In a separate boat were Santee Cooper utility workers who had coordinated with her before heading out into flooded streets and neighborhoods.

Aboard the boat, Lisenby navigated through a maze of flooded streets marked by inundated homes, businesses and junkyards and scraggly treetops holding trapped squirrels.

When she arrived at the Grainger site, Lisenby saw 6,000 feet of AquaDam, a massive water-filled tube, to create a barrier and prevent further flooding. She also saw sprawling areas — enough to fill a football field — of sandbags ready to be carried by helicopter to fill breaches should a dike near the full coal pit leak.

She took water samples above, at and below the ash ponds and said she expects results back this week.

But Lisenby said she hadn’t seen the same treatment when she was at Duke Energy’s coal ash pits in North Carolina on Sept. 19.

From her perch on a boat in the Neuse River, Lisenby saw no AquaDam at Duke’s H.F. Lee and L.V. Sutton coal plants, nor were there sandbags ready for transport. And Duke didn’t coordinate with her when she went out on the water.

To Lisenby, it was also a "tale of two utilities." She looks back to Hurricane Matthew as an instructive moment, when all three ash ponds at the Lee plant flooded.

"With Hurricane Florence, some parts of North Carolina were projected to get 30 inches of rain, so there’s no doubt in my mind that the H.F. Lee ponds would inundate again," she said. "Duke knew that, too, and they did nothing."