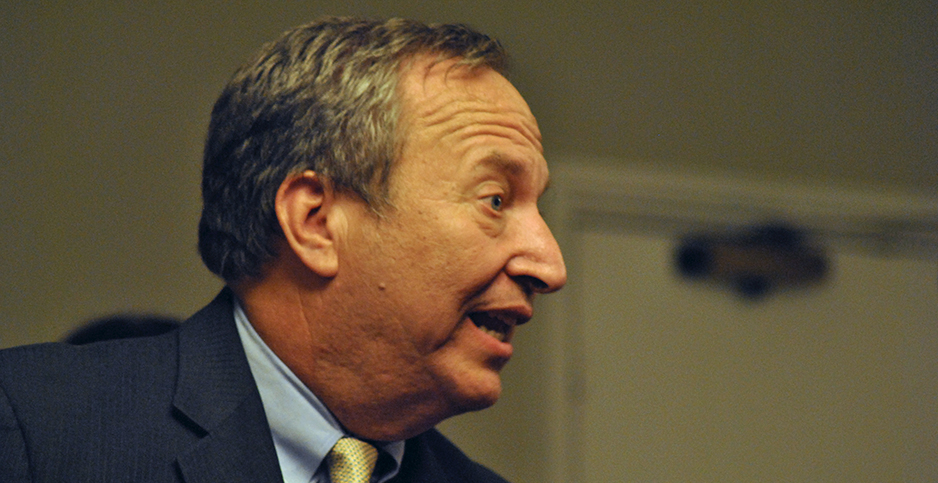 Climate activists and other liberal groups are demanding that Joe Biden sever ties with informal campaign adviser Larry Summers, a deregulatory figure of the Clinton and Obama administrations whom they view as an obstacle to progressive reform.

The Sunrise Movement and Justice Democrats were some of the first groups to call on Biden to publicly distance himself from the well-connected economist. It’s the first targeted, explicit demand that progressives have made to Biden since the former vice president became the presumptive Democratic nominee.

"Larry Summers’ legacy is advocating for policies that contributed to the skyrocketing inequality and climate crisis we’re living with today," Justice Democrats and the Sunrise Movement wrote in an online petition. They argued that Summers wouldn’t help Biden win over the young and progressive voters who opposed him in the primary.

"Larry Summers has disqualified himself from public life in so many ways that the idea of asking him for advice should itself be disqualifying in any sane world," wrote Claire Sandberg, Sanders’ former national organizing director.

Jamal Raad, who was communications director for Inslee’s campaign, posted a lengthy Twitter thread detailing Summers’ history of scaling back the federal response to the Great Recession.

The Biden campaign has said the former vice president is in touch with a large network of informal advisers. Team Biden hasn’t publicly defended Summers. Instead, the campaign has highlighted its discussions with progressives, including the youth-led Sunrise Movement.

Summers, a longtime operative, rose through the Reagan, Clinton and Obama administrations until he was halted in 2013 when Democratic senators, including some moderates like then-North Dakota Sen. Heidi Heitkamp, tanked his bid to become chairman of the Federal Reserve.

Democratic senators cited many of the same concerns that progressive are raising now: Summers has a history of advocating policies that prioritize deregulation and deficit reduction over direct government intervention.

The office of Sen. Jon Tester (D-Mont.) said Summers’ history of deregulating financial markets was a deal breaker for his nomination, according to a 2013 HuffPost article.

Summers is a supporter of the Baker-Shultz plan for a gradually increasing carbon tax with dividends, paired with rolling back climate regulations. He’s also advocated against climate policies that he says could crimp economic growth.

When the Clinton administration was debating its position on the Kyoto climate treaty talks, Summers, then the deputy Treasury secretary, said in 1997 that cutting greenhouse gas emissions too quickly could risk unknowable economic consequences, according to a 2009 New York Times article.

Summers also curtailed green investments in the 2009 American Recovery and Reinvestment Act, according to the progressive Revolving Door Project, which cited the 2019 book "A Crisis Wasted" by Reed Hundt, a member of the Obama administration’s transition team.

Hundt wrote that when he approached Summers with a green investment plan that some others in the transition had resisted, Summers dismissed it.

Summers has expanded on that view in a way that suggests hostility toward the Green New Deal, a proposed regime of massive government spending to boost clean energy and adaptive infrastructure.

"The idea that a huge spending program is the way to stimulate the economy, or the idea that the way to get better at high tech is for the government to take over the technology industries, these kinds of ideas basically have become passé because they’ve been disproven," Summers said in a 2001 interview with PBS.

He’s also notorious among progressives for a seven-page memo he wrote in 1992 at the World Bank outlining the economic case for exporting pollution to poor countries. Summers later said it was a sarcastic response to another memo.

Other progressives noted personal reasons for Biden to distance himself from Summers. Podcaster Katie Halper posted to social media a picture of Summers socializing with billionaire child predator Jeffrey Epstein in 2011, three years after Epstein pleaded guilty to charges related to sex trafficking of minors. (Epstein was a major donor to Harvard University, where Summers was president from 2001 to 2006.)

This isn’t the first time an informal adviser has caused headaches for Biden.

Heather Zichal, the Obama administration’s former climate czar, sparked a progressive backlash last year when she suggested Biden’s climate plan would seek a middle ground. Biden later said she wasn’t on the campaign, and he’s spent the past month trying to use a build-out of his climate plan to appeal to progressives.