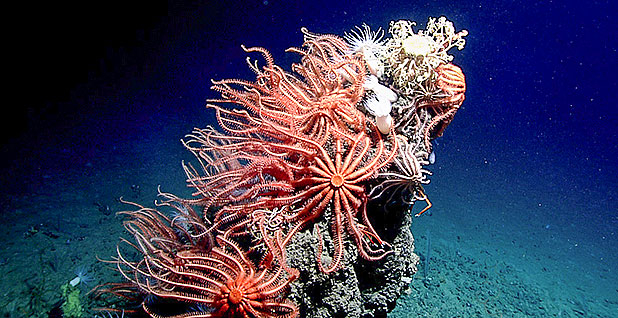 The top of a craggy pinnacle about 2 meters tall supports a dense community of orange suspension-feeding brisingid sea stars and, at the very top, a gorgonocephalid basket star. NOAA Office of Ocean Exploration and Research

With international negotiators starting two weeks of meetings in Kingston, Jamaica, to hash out regulations for ocean-floor mining, environmentalists are urging regulators to move cautiously.

The goal is to finalize draft rules on the extraction of industrially significant metals from the deepest reaches of the ocean bottom, environments devoid of sunlight but found to be harboring abundant life that scientists know little about.

Environmental groups have dispatched their own personnel to the talks in hopes of influencing the International Seabed Authority’s rules.

To fuel discussion, the International Union for Conservation of Nature (IUCN) released a comprehensive study today on the promise and peril of deep-sea mining.

IUCN and other groups fear that too little is known about the likely environmental impact of seabed mining for these rules and regulations to be finalized. They are pleading with the International Seabed Authority (ISA) to put science ahead of commercial exploitation as the first mining proposals inch closer to reality.

"We are operating in the dark," IUCN’s marine program director, Carl Gustaf Lundin, said in an overview of his organization’s findings. "Exploitation of minerals using current technologies could potentially destroy the rich deep-sea life forever, benefitting only a few and disregarding future generations."

The authority has already issued dozens of exploration licenses to governments interested in advancing ocean-floor mining in zones far beyond the control of individual nations.

The U.N. Convention on the Law of the Sea established the ISA to oversee about half the surface of the planet, but its activities are mainly focused on key areas of high concentration of metals in the western Pacific Ocean, the Mid-Atlantic Ridge and portions of the Indian Ocean.

East Asian governments have been particularly aggressive in their pursuit of deep-sea mining in international waters. A West Pacific region stretching from the Mariana Islands to the Marshall Islands is of special interest, as it’s known to hold vast quantities of cobalt and other minerals critical for the manufacturing of electric car batteries, encouraging state-owned companies from China, South Korea and Japan to research and develop technologies and methods for getting at it (Greenwire, May 30).

IUCN acknowledges the potential economic gains but argues that much more research is necessary to determine when and how deep-ocean-floor mining can occur. The group also recommends that some of the proceeds from deep-sea mining operations should be redirected to further deep-ocean research. The authority plans to tax the proceeds of ocean-floor mining and distribute the revenue to member governments.

"Unlike existing ocean uses, deep-sea mining is a new marine activity, which allows the precautionary approach to be integrated into the regulatory framework prior to the onset of commercial operations," the IUCN study argues.

Alongside regulations, the report calls on the ISA to produce "baseline studies, regional scale and site-specific spatial planning and monitoring programs, as well as an advanced mitigations strategy that ensures effective protection."

The report also presses for the authority to ensure that the money it plans to collect from deep-ocean miners "is to be reinvested in the deep sea through training, education, marine science and conservation programs."

At the same time, conservationists say these public funds should be devoted to research on marine life and biodiversity, while funding for research into mineral extraction technologies should be left for the private sector to bear.

The authority’s annual meetings are scheduled to run until July 27.