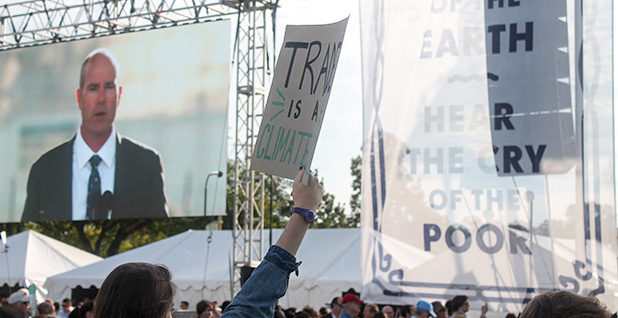 The Sierra Club's Michael Brune is one of the national environmental leaders planning an assault on President Trump's agenda. Photo by Elvert Barnes Photography, courtesy of Flickr.

They are largely united in their opposition to Trump, who has promised to roll back environmental rules, expressed doubts about prevailing climate change science and proposed slashing funding for federal environmental programs. Liberal groups left reeling after the November election are coordinating their tactics as they prepare to shift from gently prodding the Obama administration to combat against the president and his allies.

"This is potentially the environmental Armageddon," Friends of the Earth President Erich Pica said of the Trump administration.

The playbook: Keep up a drumbeat of negative messaging, challenge the administration relentlessly in court, loudly oppose nominees for key jobs, pressure Congress, rally the public against rollbacks of regulations and pounce when Trump’s environmental agencies fall down on the job.

"We are going to fight this administration every step of the way for as long as it’s in power," Sierra Club Executive Director Michael Brune said. "President Trump and his allies in Congress are a unifying force. This administration is seeking to dismantle the protections that every American enjoys for clean air, clean water, a stable climate and public lands."

Environmental leaders say their strategy is far more aggressive than what they have done during past Republican administrations. They’ve seen few indications they’ll find common ground with Trump.

Brune said he has never seen so much collaboration and coordination among environmentalists. "We are having frequent calls, large conference calls with dozens or maybe hundreds of organizations on a daily basis to coordinate our work," he said. "And we’re also deepening the connections between large national environmental organizations and smaller faith-based or local groups so that we’re more coordinated in our response."

After the presidential race, some environmentalists were optimistic Trump might shift to the left of his campaign trail rhetoric on climate change and the environment. During the transition, he met with climate activist and former Vice President Al Gore, said he’d keep an open mind on the Paris climate change accord and called himself "somebody that gets it" when it comes to environmental issues (E&E Daily, Dec. 12, 2016).

But Trump’s environmental nominees, his executive actions to repeal major regulations and his plans to slash U.S. EPA’s budget by about a third have hardened the opposition.

"We saw through the appointments — with Pruitt in particular — that these guys are science deniers and there seems like there’s very little reasoning with them," Pica said. "Friends of the Earth certainly is not looking to work with them on policy. … You can’t work on policy if there’s not a basic understanding of what the heck’s actually happening to the environment."

Jeremy Symons, associate vice president at the Environmental Defense Fund, said if anyone had doubts about the administration’s direction, "nominating Scott Pruitt put them all to rest." The Pruitt nomination was a galvanizing moment for environmentalists, he said, noting that his was the first nomination for EPA administrator that EDF had publicly opposed.

During the Pruitt confirmation fight, environmentalists saw their messaging campaign as a partial win. Even though he was ultimately confirmed as EPA’s boss, his ties to the fossil fuel industry and record of battling EPA in the courts were frequently mentioned in press reports. Pruitt was confirmed on a mostly party-line vote, 52-46, in the Republican-controlled Senate with the most recorded "no" votes of any EPA administrator in the history of the agency (E&E News PM, Feb. 21).

"The fact that Scott Pruitt is the most controversial EPA nominee and got approved by the narrowest of votes simply underscores the fact that this administration is in for a rough ride as they try to cripple the Environmental Protection Agency and what it does," Symons said.

While greens point to some policy wins during the Bush administration, they note that they are not expecting to see much compromise with Trump.

Under Trump, "the scale and scope and the single-minded direction of moving backwards instead of forward, of unapologetically putting politics ahead of science, really is without precedent in any previous presidency, Democratic or Republican," Symons said. While there were fights over Bush policies, he said, there were also victories, notably positive steps on ocean policies.

Trump and Pruitt have defended their early moves to roll back Obama-era regulations. Administration officials have pledged to preserve EPA’s "core mission" of protecting public health and the environment, while scaling back some of EPA’s work they deem overreaching.

"I believe that we as a nation can be both pro-energy and jobs and pro-environment," Pruitt told EPA staff after taking office. "We don’t have to choose between the two."

Battles in the media, courts, Congress

Greens view keeping the public informed about the new administration’s environmental actions as central to their strategy.

"Job No. 1 is making sure that the public knows what’s going on, given all the distractions that are out there for all the other news of the day," Symons said.

Former Obama administration officials have come out in force to join the messaging war, too.

Ex-EPA spokeswoman Liz Purchia started a public affairs shop aimed at firing back against the Trump administration. Her group is representing former EPA chief Gina McCarthy, environmental groups and other organizations. Purchia expects much of her firm’s work to focus on state-level efforts (E&E Daily, March 7).

Among the major fights green groups and their allies are gearing up for: the confirmation battle over Trump’s Supreme Court nominee, Neil Gorsuch; the upcoming epic brawl over the fiscal 2018 budget; lower-level nominees for agencies like EPA and the Interior Department; and expected executive orders to repeal President Obama’s signature climate change rule and other environmental regulations.

Frustrated environmental advocates are taking their complaints to Congress.

The Sierra Club, for example, is "getting back to basics and doing grass-roots engagement really well," Brune said. "A classic act of call your member, visit with your member of Congress, go to the town hall hearings are now a lot more powerful when there are millions of people doing the same thing."

Brune said his group has seen a surge in dues-paying members as well as supporters who have attended rallies and taken action online since Trump’s election.

Environmentalists are also beefing up their legal practices as they prepare to duke it out against Trump in the courts.

"We’re hiring lawyers, we’re coordinating our work across the movement," Brune said. "We intend to hold this administration accountable to the law and unraveling protections."

Although many environmental groups are planning to spend the next four years waging war from the outside, at least a few want seats at the table.

Take the Nature Conservancy, one of the world’s largest conservation organizations. Earlier this month, that group sent one of its top officials to meet with Trump and other top administration officials at the White House to discuss priorities for infrastructure.

Lynn Scarlett — global managing director for public policy at the conservation group and former No. 2 official at the Interior Department during the George W. Bush administration — made a pitch to the White House that infrastructure development and the environment can go hand in hand (Greenwire, March 9).

"Our view is there’s a place for every kind of voice in the environmental conversation," Scarlett said, adding that different groups are better positioned to do different things. "We’re bridge builders. And that means it’s really important to keep a dialogue with everyone."

Scarlett noted that her group doesn’t plan to keep quiet if it disagrees with Trump’s actions. "We will stand up and be counted when we think bedrock protections or good rules are in play," she said.

Last week, for example, the Nature Conservancy issued a statement slamming the administration’s proposed cuts to environmental spending, calling Trump’s 2018 budget proposal a "misguided approach" and urging Congress to "embrace a budget that advances security, prosperity, and the environment."

Other conservation groups, including some focused on public lands, hunting and other sporting activities, are amenable to working with the new administration.

Some are cautiously optimistic about Trump’s pick of former Montana Republican Rep. Ryan Zinke to lead Interior. Zinke, who bills himself as a Teddy Roosevelt fan and doesn’t want to sell federal lands to states, is seen as a mixed bag for many conservation groups (Greenwire, Dec. 14, 2016).

Collin O’Mara, president and CEO of the National Wildlife Federation, praised Trump in December for selecting Zinke, calling the new Interior chief "a sportsman and proponent of keeping public lands public and investing in conservation."

O’Mara said in a recent interview that his group sees the crisis facing wildlife as so urgent that it cannot afford to take four years off. "We can’t simply play defense," he said, noting that there are areas where there may be opportunities for compromise, like public lands and wildlife conservation.

"We will try to find those places," he said.

NWF’s plan for the Trump era, he said, is to be "deeply engaged in conversations when we do agree and being clear when we don’t."

Land Tawney, executive director of Backcountry Hunters & Anglers, called Zinke "the best pick out of what had been put forth for secretary" of Interior.

His Montana-based group plans "to treat the administration just like anybody else," Tawney said. "Where we agree with what they’re doing, we’re going to applaud and ask them to do more." And they’ll let the Trump team know when they disagree. "It’ll be a mixed bag for sure."

The hunting group was in talks with the Trump transition team and is now engaging with Interior officials and the secretary himself, said Tawney, who previously worked with Zinke in Montana. "We’ve been texting back and forth," Tawney said.

"I think some people are ready to throw rocks no matter what," he said, "and we’re going to look at the merits of everything that’s being talked about and engage that way."