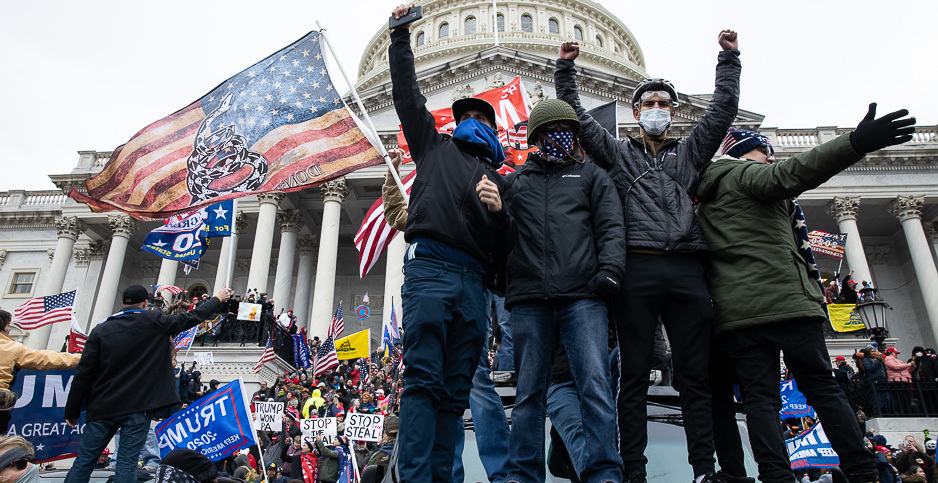 PJM Interconnection LLC cited “ongoing activity” at the Capitol and surrounding area as it sent a conservative operations declaration for its entire grid system at 5:30 p.m. on Jan. 6, 2021. PJM serves a region that stretches across 13 states and the District of Columbia.

Conservative operations — often declared during hurricanes or other extreme weather events — are designed to ensure there’s enough excess energy available in case grid infrastructure is disrupted or knocked out. Some observers who follow PJM said in interviews they had not previously heard about the declaration tied to last year’s events at the Capitol and viewed it as a remarkable moment for the grid operator.

“This would be the first I’ve seen where an action was deliberately taken in response to something that was a direct physical or cyber risk,” said Jonathon Monken, principal at the consulting firm Converge Strategies LLC and the former senior director of system resilience and strategic coordination at PJM. “It’s certainly unique.”

Power plant owners, utilities and others in the PJM region were informed of the declaration, as was the Federal Energy Regulatory Commission, which oversees the country’s wholesale power markets. But the incident was not widely publicized to the media by PJM, unlike with other recent conservative operations declarations related to weather.

“The Conservative Operations Declaration is a modest step that provides us flexibility (and notice to states and stakeholders) that we could move forward with additional emergency procedures if the situation warrants,” Craig Glazer, vice president of federal government policy at the nonprofit grid organization, said in an email to FERC that evening.

E&E News obtained the PJM email to FERC through a Freedom of Information Act request.

The email was sent to FERC commissioners around 6:40 p.m., shortly after police had begun to clear the hundreds of protesters who stormed the Capitol. A mob of Trump supporters sought that day to disrupt certification of the 2020 election, in which Joe Biden defeated Trump to win the presidency.

Glazer told FERC the declaration was issued not only in response to the attack on the Capitol but also due to the potential for additional incidents “in the next few days as Congress reconvenes.”

“I will keep you informed should the situation change,” he wrote. “This is a tough period for our nation and we all appreciate your public service.”

PJM is charged with overseeing the flow of power across much of the mid-Atlantic region, including all of Washington, D.C. Typically, the organization will enter conservative operations a few times per year — and only if there is an “imminent threat” to the power grid, Monken said, who worked at PJM from 2016 to 2020.

Moving to conservative operations allows grid operators to cancel certain maintenance work, ramp up power generators that don’t run around the clock, and take other actions to safeguard the grid and keep the lights on.

“The basic idea is to ensure reliability by telling everybody, ‘Go to your stations and perhaps even turn things on we wouldn’t need under normal conditions,’” said Mike Jacobs, a senior energy analyst at the Union of Concerned Scientists whose focus includes PJM. “I’ve never heard of it for a social cause, but that’s the kind of world we’re in.”

In the PJM region, the extra resources — or reserves — that come online during conservative operations are typically coal and natural gas plants, said Susan Tierney, a senior adviser at the consulting firm Analysis Group who specializes in energy policy. Reserve power plants are also the ones that are most expensive to run, she said.

“Typically, a regional grid operator is already going to [be] running all available zero-fuel-cost supply (nuclear, wind, solar) whenever it’s available, so the additional ones to dispatch would likely be fossil,” Tierney, who previously worked at the Department of Energy, said in an email.

While reserve generators are sometimes financially compensated for being available during conservative operations, that did not occur in this situation, said Susan Buehler, chief communications officer for PJM.

“There was very little change in operations,” Buehler said in an interview.

The conservative operations declaration on Jan. 6, 2021, was lifted at 11:59 p.m. the following day, according to PJM’s emergency procedures webpage.

Compared to other reliability actions that grid operators can take, a conservative operations declaration is relatively modest, said Devin Hartman, director of energy and environmental policy at the R Street Institute, a nonprofit that supports free markets.

Unlike a conservation alert, which grid operators may issue to reduce power demand during very hot or cold days, conservative operations don’t directly affect consumers by asking them to change their energy consumption.

Still, grid operators ideally try to avoid entering conservative operations because of potential costs that can be added “to the whole system,” said Hartman, who has previously worked at FERC.

Prior to the events of Jan. 6, 2021, PJM had been on “heightened alert” regarding cybersecurity and physical operations in the months following the 2020 election, according to Glazer’s email to FERC.

PJM’s emergency procedures page does not include “heightened alert” as an official emergency or reliability action, but it’s not an unusual or unheard of status for the grid operator and has little impact overall, said PJM’s Buehler.

It’s common for grid operators to update FERC on grid conditions “when their systems are stressed or they anticipate potential issues,” said Celeste Miller, a spokesperson for FERC.

The same goes for utilities.

Staff members at Pepco are in regular contact with the grid operator as well as “federal and local security agencies,” Kauzlarich said.

A subsidiary of utility giant Exelon Corp., Pepco provides electricity for high-profile government events, including presidential inaugurations and State of the Union addresses, according to Kauzlarich.

For such events, the utility performs additional tasks that include inspecting energy equipment and “continuously monitoring intelligence to ensure we are aware of any potential threats and have the most notice possible, should something occur,” she said in an email.

Ultimately, conservative operations declarations are one of many emergency management tools used by the regional operators of the U.S. power grid, said Jacobs of the Union of Concerned Scientists. What’s unusual in this case is that the declaration was tied to a politically significant event, he said.

“What they’re suggesting was that this emergency could spread beyond just the Capitol,” Jacobs said. “That’s in effect what they were interpreting: ‘We need to at least get people onto their stations in case this [becomes] a bigger civil unrest.’”