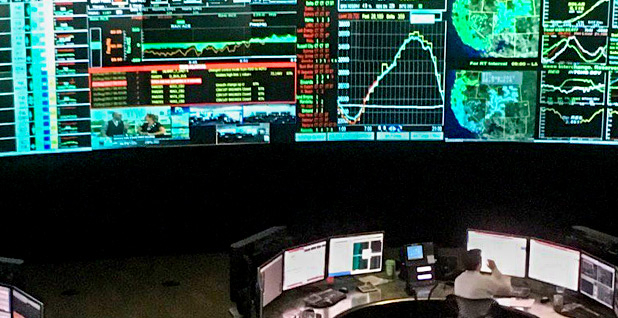 LENOIR CITY, Tenn. — As the moon’s shadow raced across the U.S. yesterday, 1,900 utility-scale solar power plants and many thousands of rooftop solar cells dozed off or shut down, one after the other, their electric currents disappearing from power networks from coast to coast.

At 2:32 p.m. EDT, on a park overlooking the Clinch River here, the sun disappeared behind the moon, revealed only by its dazzling corona.

Venus gleamed bright in the odd twilight, a breeze picked up, and a cry of delight rose from dozens of spectators and from an engineering team tracking the impact of the first solar eclipse seen in the U.S. in 24 years. In less than two minutes the total eclipse was over and the sun’s energy began making power again, welcomed by the Beatles’ "Here Comes the Sun."

From the standpoint of the overall North American grid, nothing much had really happened.

Months of planning had prepared utility operators to ramp up power smoothly from hydro dams, natural gas turbines and other generation to fill solar power’s gaps, and then pull back these sources when the sun returned. "We’ve done a lot of work up front," said Brett Wangen, director of engineering at Peak Reliability, the grid monitor for 14 Western states, British Columbia and part of Mexico’s Baja California. "The nice thing is, we knew exactly when it was going to start."

For Ben York, technical leader of an engineering unit of the Electric Power Research Institute, the eclipse was an opportunity to dig deeper into solar power’s behavior to equip grid operators to manage more of it in the future. "We are really focusing on how well the [grid] models work, how well the forecasting works," York said. "When things trip off, how do they recover."

The EPRI team had lined up monitors beneath a rooftop solar array at the park overlooking the Melton Hill Dam on the Tennessee Valley Authority’s system. As the eclipse unfolded, they tracked the sun’s energy and power output from nine solar plants in Alabama, Georgia, Indiana, North Carolina, Tennessee and Wisconsin, and from a cluster of customer rooftop solar panels in Arizona. The team intends to issue its eclipse impact report in September.

A few minutes before the start of the eclipse at 1:04 p.m. EDT, a solar plant in Chattanooga was pumping out 6.4 megawatts of electricity. An hour later, the output was cut in half. A half-hour more and the unit was still.

There were surprises. Power demand in the 14-state Southwest Power Pool (SPP) along the lower Mississippi River Valley dropped below forecasts in part because sightseers played hooky from work to catch a once-in-a-lifetime vision, and the eclipse also triggered a 1,500-megawatt shift in wind farm output in the region.

"This was a great learning opportunity for SPP," said Vice President of Operations Bruce Rew, praising the system’s operators for smoothing out the unexpected.

California’s grid operators saw about half of their solar power dwindle over a two-hour period but emerged unscathed. Officials trumpeted their ability to manage quick-moving renewables and vowed to continue their regulatory push to install more low-carbon resources. A bill currently moving through the state Legislature would increase California’s renewables portfolio standard to 60 percent by 2030 and set a 100 percent "carbon-free" target by 2045.

"Solar energy and renewable energy in general have allowed us both to green the grid and reduce greenhouse gases and air pollution," said California Energy Commission Chairman Bob Weisenmiller. "In 2016, renewables were about 30 percent of our electricity generated, and it’s going to keep increasing as we go forward."

About 100 of CAISO’s 600 employees milled around the courtyard of their headquarters in Folsom, about 25 miles east of Sacramento. Some brought their children to work to witness the eclipse, and some wore commemorative "Solar Eclipse Team" pins.

The mood at the grid operator was calm and confident. CAISO had secured about 1,000 megawatts of grid-balancing "regulation" power for each hour of the eclipse, to smooth out any choppy voltage stemming from the quick substitution of resources. Normally, it has about 350 megawatts per hour on hand for regulation. The grid was also buoyed by average or cooler-than-normal temperatures across the state, as well as an absence of wildfires threatening transmission lines.

By 10:25 a.m. PDT, solar started coming back up from a low of about 2,890 megawatts, or 9.3 percent of the grid’s mix, and grid operators started easing off hydropower and gas. Wind power, which lost about 200 MW early on, remained stable thereafter at about 4.5 percent of the mix. At peak obscuration, gas made up about 37 percent of the mix, while hydropower contributed about 15 percent.

Solar zoomed back onto the grid at such a rate — more than 100 megawatts per minute at one point — that electricity prices on the 15-minute market in California went into the negative range, causing solar generators to slow their sales briefly. The regional energy imbalance market, which conducts cross-border transactions in five-minute increments, started selling power out of California into neighboring states.

"It just doesn’t get much smoother than this," said CAISO spokesman Steven Greenlee.

The swings in solar power up and down give operators an exercise in managing sharp shifts. Peak Reliability’s Wangen said his organization had the authority it needed to order generators to increase or shave output to keep their system in balance, or to order solar units to shut down prior to the eclipse so that operators would not have to cope with solar units’ fluctuations. "We didn’t feel that was necessary," he said. "We felt plans were appropriate."

EPRI hopes to see how the shifting solar power flows during the eclipse affected the critical digital controls called inverters that turn direct current flows from solar photovoltaic cells into the alternating current that move across the grid, York said.

The solar response from customers’ rooftop units is a looming issue for grid operators, the North American Electric Reliability Corp. (NERC) said in a preview of the eclipse issued in April. "For most systems, the distribution of residential rooftop systems are not observable; this will pose problems in the future if the level of renewable generation continues to grow because it will become increasingly difficult to model, plan, and operate the system without explicit knowledge of the rooftop solar locations and hourly megawatts outputs," NERC said.

The future of the DOE-led research on solar power and the modernization of the nation’s electric grid networks is an unknown as Congress and the Trump administration grapple over agency budgets.