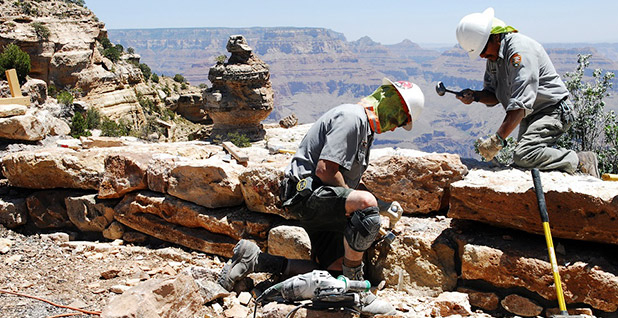 The chairman of the House Natural Resources panel said yesterday he’d like to consider legislation this month that aims to fix the $16 billion public lands backlog along with a separate bill to establish mandatory funding for the Land and Water Conservation Fund.

Rep. Raúl Grijalva (D-Ariz.) said that although the two issues are "linked," he plans to handle them in different bills through his committee.

"Not even my side would support putting them together," he said of the bipartisan legislation to fix infrastructure in national parks and other public lands and an effort to make funding for the LWCF mandatory at its current authorized annual level of $900 million.

The chairman wants to consider the "Restore Our Parks and Public Lands Act," H.R. 1225, and the LWCF funding legislation during the same markup before the July 4 congressional recess, he said.

Grijalva said he isn’t going to wait for the Senate to move first on either bill. Speaking about the deferred maintenance bill, he said the House version was "a little better."

It would create a restoration fund comprising up to 50% of otherwise unallocated revenue from all energy production on federal lands and waters.

The current Senate version also would establish a fund from unallocated onshore and offshore energy production, but it just targets the $12 billion deferred maintenance backlog at the National Park Service.

Grijalva’s counterpart in the Senate, Alaska Republican Lisa Murkowski, told reporters yesterday she hoped to have a hearing next week on legislative proposals to tackle the deferred maintenance backlog in national parks.

As for LWCF, the Energy and Natural Resources Committee chairwoman said she believes mandatory funding for the program is "still a real challenge" because there is "a pretty big split" over the issue within the Republican caucus.

She acknowledged that making funding permanent for the LWCF, or any program, would be problematic for her as an appropriator.

"Anytime you move anything over to the mandatory side of the ledger, you then as the appropriator lose some of the discretion, you lose some of the oversight," said Murkowski, who also leads the Senate Interior and Environment Appropriations Subcommittee.

"And so, as a general rule, appropriators would prefer not to place more on the mandatory side," she added.

Momentum is building for legislation that addresses the enormous maintenance backlog on public lands, particularly the popular and lucrative national parks.

The issue came up repeatedly yesterday during a Natural Resources "members’ day" hearing where lawmakers on and off the panel spoke about committee-related legislation they support.

"Deferred maintenance backlog in my district alone is $369,000, and that climbs to $42 million when you look at the state of Arkansas in total," said Rep. French Hill (R-Ark.), who noted the Razorback State has eight National Park Service units.

"This issue hits close to home," said the representative from Arkansas’ 2nd District, urging the committee to take up H.R. 1225.

Hill said rural economies throughout the country "benefit greatly from national park" visits and that when maintenance and infrastructure problems plague trails, refuges or parks, "tourism is harmed."

Bishop also made a push for his legislation yesterday, playing a short video highlighting the eye-popping backlog figures in iconic places such as the Grand Canyon ($313 million), Yellowstone ($563 million) and Yosemite ($645 million) national parks.

The video also emphasized the considerable bipartisan support in the House for the "Restore Our Parks and Public Lands Act."