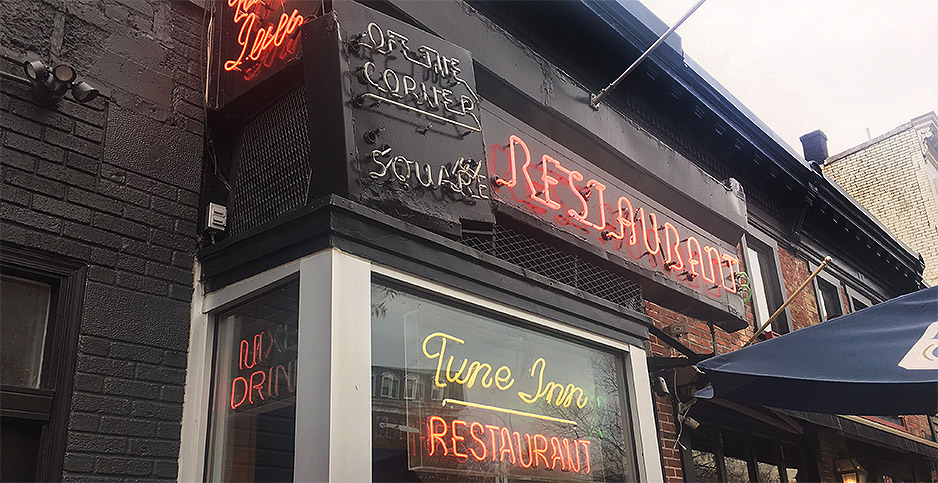 The Tune Inn on Capitol Hill is a favorite dive bar among locals and politicos. Kellie Lunney/E&E News

Raúl Grijalva was at a Capitol Hill bar earlier today when Interior Secretary Ryan Zinke fired off a tweet calling him a drunkard, according to multiple sources.

Now Grijalva, Zinke and many others around them must deal with the aftermath of a rhetorical savaging that raises questions about Zinke’s motives, smudges the boundary between public and private lives, and roughens the road ahead for a department already facing a brutal new year.

On its face, Zinke’s blasting of Grijalva for his "drunken and hostile behavior" and for working at the "bottom of the bottle" violated every convention for a Cabinet secretary facing congressional scrutiny (Greenwire, Nov. 30).

As the expected next chairman of the Natural Resources Committee, Grijalva starting next year can comb through Interior’s budget, personnel, policies and political ties. He’ll wield subpoena power, which he has already threatened to use.

While some administration officials strive for relentlessly civil tones even while getting grilled, personal tensions between Zinke and Grijalva have escalated. In a USA Today opinion piece today, Grijalva called for Zinke’s resignation.

Zinke "holds his job as a public trust, not as a stepping stone to his further personal ambitions. He has abused that trust and damaged the Interior Department in the process. The least he can do is step down and give his successor a chance to begin reversing that damage," Grijalva wrote.

Grijalva itemized ongoing investigations into Zinke, including one reportedly referred to the Justice Department, and indicated Democrats will be probing further into what he called Zinke’s "ethical and managerial failings."

By lashing back so viscerally, Zinke gave more ammunition to his critics who are already locked and loaded.

"It’s unbecoming of a cabinet secretary," Center for Western Priorities Executive Director Jennifer Rokala said in a statement. "It’s also foolish to pick a fight with a member of Congress who will soon have oversight and subpoena power over your agency."

Within the Trump administration, though, combativeness can be construed as a virtue in the eyes of a mercurial president, who stood by Supreme Court nominee Brett Kavanaugh after he came out swinging in his Senate confirmation hearing.

Some congressional Republicans, too, think they can put Grijalva on the defensive.

"If anyone should resign, it should be Rep. Grijalva," the Congressional Western Caucus said in a tweet.

Adam Sarvana, communications director for the House Natural Resources Committee’s Democrats, referred to the statement the office released on the matter. He added: "Rep. Grijalva is not drunk at work and does not create a hostile workplace environment."

In 2015, a female former Grijalva aide received $48,000 in severance pay as part of a settlement agreement stemming from her allegations of a hostile work environment.

The money came out of the Natural Resources Committee’s operating funds.

Grijalva told E&E News in November 2017 that the allegations he was frequently drunk at work and created a hostile work environment had "no merit."

He said at the time, "It’s frustrating for me because I feel handcuffed that I can’t respond like I want to," referring to the confidentiality clause he and the employee signed restricting them from discussing the details of the complaint and settlement (E&E Daily, Nov. 30, 2017).

Grijalva further defended himself in a December 2017 op-ed in the Arizona Daily Star.

"As I have now had to make clear to multiple news outlets, I do not work while drunk and have never had a hostile workplace environment," he wrote.

In his memoir, "American Commander," Zinke recounts some of his own experiences with booze.

"Among the SEALs, alcohol was used as frequently as firearms and chewing gum," Zinke wrote. "There was a bar in every team room. Despite that, no man drank on duty. But once that beer lamp was lit, man, these guys drank like Prohibition was right around the corner."

In a brief statement today, Grijalva said simply that "the American people know who I’m here to serve, and they know in whose interests I’m acting. They don’t know the same about Secretary Zinke."

The Arizona Democrat was scheduled to do an interview with C-SPAN’s newsmakers at 12:30 p.m. today, which he canceled before noon, citing health concerns.

The Tune Inn, steps from the Capitol on the House side, is a popular watering hole for congressional staff, reporters and the occasional lawmaker. It’s a diverse bar — 20-something Hill staffers mingling with military veterans, tourists and neighborhood residents — underneath various stuffed bears and deer mounted on the walls.

The bar and restaurant was packed today during lunch, with people eating and drinking to Elton John’s "Tiny Dancer" and Bonnie Tyler’s "Total Eclipse of the Heart" while watching CNN’s coverage of a magnitude 7.0 earthquake near Anchorage, Alaska.