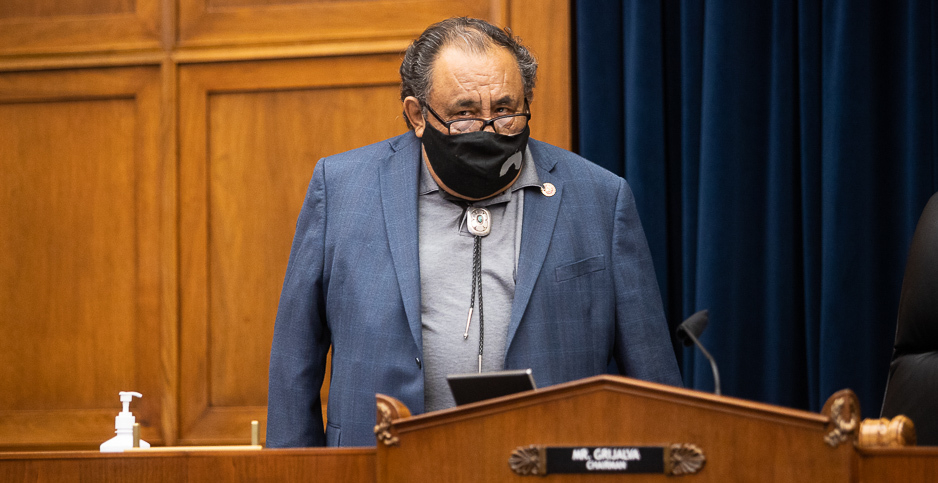 House Natural Resources Chairman Raúl Grijalva blasted Republican lawmakers for not wearing masks on Capitol Hill after testing positive for the COVID-19 virus over the weekend.

"While I cannot blame anyone directly for this, this week has shown there are some members of Congress who fail to take this crisis seriously. Numerous Republican lawmakers routinely strut around the Capitol without a mask to selfishly make a statement at the expenses of their colleagues, staff and families," the Arizona Democrat said in a statement.

Grijalva, 72, said he is asymptomatic and "feel[s] fine" but will self-quarantine on the advice of the Capitol’s attending physician.

The veteran lawmaker attended a Natural Resources Committee hearing Tuesday with Rep. Louie Gohmert (R-Texas), who a day later announced he tested positive for the virus and had been seen at the hearing without a mask. Grijalva had called Gohmert’s failure to wear a face covering "selfish."

House staffers noted that Grijalva had pressed to hold the hearing, which looked into the confrontation between U.S. Park Police and Black Lives Matter protesters a month earlier near the White House, in a remote fashion.

But the chairman ended up scheduling the public hearing after Interior Secretary David Bernhardt tweeted in June that they should meet in person to discuss the incident. Bernhardt had recently been traveling and indicated he had an "easy trip from Arizona."

Interior spokesman Ben Goldey said yesterday, "We wish Chairman Grijalva a speedy recovery. He’s paid a lot of money by the American people to be an elected official — a job he sought and was entrusted to uphold — and showing up for work like millions of other dedicated public servants, such as our law enforcement officers and firefighters, is true leadership."

Grijalva said he was pleased that in the wake of Gohmert’s test, Speaker Nancy Pelosi (D-Calif.) announced she was mandating that all lawmakers wear masks on the House floor and in House office buildings with few exceptions.

He said the move would "keep members and staff safe from those looking to score quick political points. Stopping the spread of a deadly virus should not be a partisan issue."

No other Natural Resources Committee lawmakers have so far tested positive for the virus since the hearing.

Rep. Jody Hice (R-Ga.), who serves on the panel, said over the weekend that he had tested negative after being screened following three "brief interactions" with Gohmert last week. He had been under a self-quarantine.

Rep. Jared Huffman (D-Calif.), a senior Natural Resources member, said he did not need to be screened because he was not in the room when Gohmert was questioning witnesses at the hearing.

In response to the news of Grijalva’s test, he tweeted, "Infuriating indeed. Responsible, honorable people paying the price for others’ recklessness."

GOP leaders, who said they have told their caucus members to wear masks, sought to blame Democrats for the virus’s spread, saying the majority party had not instituted mandatory testing for members and staff.

"The Trump administration offered to help with the tests, but the House majority refused to accept them," House Minority Leader Kevin McCarthy (R-Calif.) said last week.

McCarthy has been touting his own plan for reopening the House with social distancing, has pushed in-person hearings and has opposed proxy voting. McCarthy rejected suggestions that Republicans in particular were shunning masks.

Gohmert, for his part, said he is also asymptomatic but as a precaution would take hydroxychloroquine with azithromycin and zinc, an alleged virus remedy that has been touted by President Trump but roundly discredited by public health officials.

Gohmert has also suggested that wearing the mask might have inadvertently captured germs that gave him the disease.