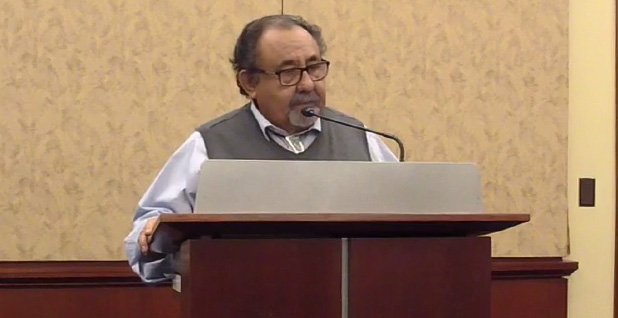 House Natural Resources Chairman Raúl Grijalva (D-Ariz.) today said his panel in January will pursue a subpoena over the Interior Department’s planned relocation of hundreds of Bureau of Land Management positions out of Washington, D.C.

Grijalva said during a news conference on Capitol Hill that Interior has failed repeatedly to provide information to the committee on the details, rationale and specific costs of moving about 30 top BLM officials to a new headquarters in Grand Junction, Colo., and nearly 200 other positions to state offices across the West.

"This is one case in which the role of the committee, and the jurisdiction, the oversight function, has basically been thwarted," Grijalva said. "And we have more than enough ample reason to pursue" a subpoena at this point, he added.

The chairman has threatened over the last several months to issue a subpoena to Interior, but his remarks today were more concrete than previous comments on the matter.

Grijalva said he has spoken directly to appropriators and wants them to include "disclosure language" in spending legislation to force Interior to produce information about the reorganization.

"If anything else, if we can get disclosure as a consequence, as a condition of funding, that would be important," Grijalva said.

Time is running out for that strategy for fiscal 2020. Congress has to pass another funding mechanism by Dec. 20 to avoid a government shutdown. Appropriators are scrambling to finalize negotiations on 12 spending bills, including one that funds Interior.

Grijalva also said Senate Energy and Natural Resources Chairwoman Lisa Murkowski (R-Alaska) should do what she can to compel Interior to provide more information and justification about the move.

"I think your question and other questions that folks from the press have asked to date are appropriate questions as to the role the Senate has in making sure the disclosure we are talking about today occurs," he said.

Grijalva said the Senate has the "same prerogative that we do" in seeking information from the department. "I don’t know if they are exercising it or not."

Murkowski has said before that she has sought information from Interior about the reorganization. Neither the House nor Senate fiscal 2020 Interior spending bill contains money for the reorganization. But Congress gave the effort $14 million for fiscal 2019; $5.6 million is going toward the BLM relocation.

BLM issued a general statement, as it has in previous weeks, rebuking Grijalva’s contention that the Interior Department has not been responsive to requests for information.

"We have given multiple briefings to committee members, testified before the committee and provided numerous supporting documents to answer all of their questions about the relocation," the statement said.

"The BLM relocation is moving ahead and we have cooperated with Congress at all points. Also, Secretary Bernhardt has offered to have regular meetings with the Committee Chairs on this issue, an offer that is still awaiting a response," it said.

Indeed, BLM is moving swiftly to implement the plan, which Interior Secretary David Bernhardt has said will improve public lands management and BLM operations by placing decisionmakers near the state and local leaders most affected by bureau actions.

BLM last month handed out formal relocation notices to 159 D.C.-based employees, giving them 30 days to decide whether to move to the bureau’s new headquarters and other state offices (Greenwire, Nov. 13).

A BLM spokesman said they do not have any numbers to release publicly on employees’ plans.

But numerous sources have told E&E News that most of the more than 220 affected employees do not plan to relocate, and some fear that top departments that handle everything from environmental compliance to oil and gas leasing will be left with a skeletal staff (Greenwire, Dec. 3).

While he said there is "validity" in having BLM employees close to the 245 million acres of lands the bureau manages, almost entirely in the West, he also noted that’s why 97% of BLM employees are already stationed in the 12 Western states and Alaska.

The result of requiring senior BLM leaders to move West is that most will choose not to do so, he added.

"The bottom line, and contrary to the rhetoric coming from political appointees in the Department of Interior, is this: This relocation and the likely loss of experienced and dedicated public servants who chose not to move will create a vacuum of leadership, experience and information that will take years for the Bureau of Land Management and the Department of Interior to overcome," Abbey said.

He added: "The result will be that most management decisions affecting your public lands will be made by political employees in the office of the secretary, in D.C., rather than by employees remaining closest to the public lands and whose decisions are based upon good science and public input. This seems, at least to me, to be a bit ironic given the talking points and stated justification from the department for this relocation plan."

Henri Bisson, who served as BLM deputy director of operations during the George W. Bush administration, echoed Abbey’s statements, saying the move will result in BLM’s leadership being "outsized and marginalized" as most employees cannot move "for family reasons."

"The resulting loss of so many senior employees will cripple BLM for many years to come," Bisson said.

The news conference came on the heels of Abbey, Bisson and a group of retired BLM senior leaders talking yesterday to congressional leaders and staffers.

The group, organized by the Public Lands Foundation, a BLM retirees’ group, has met with Grijalva, Rep. Deb Haaland (D-N.M.), and Republican Sens. Cory Gardner of Colorado and Steve Daines of Montana. They want lawmakers to include language in an Interior appropriations bill blocking the relocation plan and the use of federal funds to pay for it (Greenwire, Dec. 10).

On that point, Grijalva said lawmakers are ready to act.

Grijalva last month asked the Government Accountability Office to investigate "the planning of and motivation for" the BLM move, and GAO has agreed to do so, he said today.

"The Interior Department needs to show its work finally," he said. "It needs to share its cost-benefit analysis, which we have asked for time and time again. It needs to give GAO unfettered access to employees whose lives are being potentially hurt by this move."

He added, "If this administration is confident the move is defensible, the GAO should have no problem confirming it."