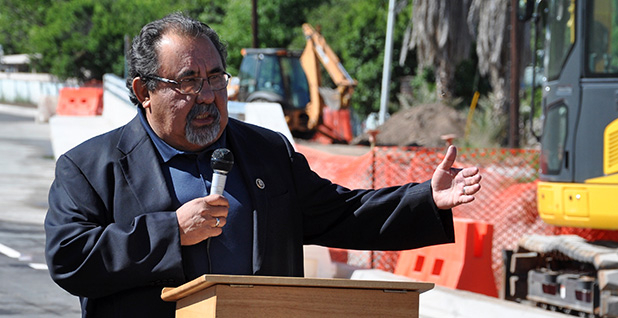 Rep. Raúl Grijalva of Arizona, the top Democrat on the Natural Resources Committee, wants to make public the details of a settlement agreement with a former female employee who alleged a hostile work environment and received $48,000 in severance pay in 2015.

Grijalva told E&E News he asked the Office of House Employment Counsel on Tuesday to talk to the former staffer’s legal counsel about waiving the nondisclosure agreement the two parties signed "so that everybody can see" the terms of the case and settlement.

The former aide claimed Grijalva was frequently drunk at work and created a hostile environment in the office — allegations that have "no merit," the Democrat said Tuesday.

"It’s frustrating for me because I feel handcuffed that I can’t respond like I want to," Grijalva said, referring to the confidentiality clause he and the employee signed restricting them from discussing the details of the complaint and settlement.

The aide received the $48,395 settlement after filing a complaint with the congressional Office of Compliance in 2015. In exchange for the payment, the staffer agreed not to sue Grijalva. The money came out of the Natural Resources Committee’s operating funds.

"Every step of the process was handled ethically and appropriately," Grijalva has said.

The woman, who worked for Grijalva for three months, had her pay frozen during settlement talks. The payment amounted to five additional months of salary.

She did not respond yesterday to a request for comment.

The settlement was first reported Monday by The Washington Times. E&E News has since independently confirmed the details of the agreement.

Grijalva agreed to talk in broad terms about the matter Tuesday evening.

Grijalva said he and the former aide mutually reached the settlement working with the Office of House Employment Counsel and following guidance issued by the House Ethics Committee. The other option would have been to go to federal court to resolve the matter.

The Office of House Employment Counsel yesterday did not respond to questions for comment about the case, or about its general process for handling complaints.

"I have a clean conscience," Grijalva said. "I have no guilt associated with this, but it’s embarrassing to me and the people who work for and with me," said the Democrat. "The sooner this is out in the air, people can draw conclusions if they want to, but at least everyone will be dealing with the same set of facts, and we won’t be going on innuendo, supposition and rumor."

The Arizonan, who was first elected to Congress in 2003, said there haven’t been any other committee settlement agreements with former employees other than the one in question. Adam Sarvana, the panel’s minority communications director, confirmed that yesterday.

Grijalva also said no other complaints have been made to him, formally or informally, about his behavior.

The lawmaker said the 2015 complaint did not involve allegations of sexual harassment. "No, not at all," he said.

The ranking member attributed the dispute with the former aide to "philosophical differences" in their approach to the committee’s work.

"I wanted her to be more assertive and aggressive about the issues we were going to confront [as the minority party]," he said. "I was more of a zealot about these issues, and she was more of a bureaucrat."

"I’m not questioning her capacity to do her work. I never did; it just wasn’t a fit," Grijalva added.

The ranking member is a staunch defender of bedrock environmental laws such as the National Environmental Policy Act and Endangered Species Act. He’s often at odds with the panel’s chairman, Rob Bishop (R-Utah), who takes a much-less-is-more approach to the federal government’s role in overseeing public lands and natural resources.

Bishop on Tuesday would not comment specifically on the matter involving Grijalva, the former aide or the payout of committee money as part of a severance package.

When pressed, however, on whether Grijalva should resign, the chairman offered this: "I don’t want him to resign, I want him to start voting correctly."

The brouhaha over Grijalva’s 2015 settlement agreement comes amid a swirl of other, separate allegations against members of Congress in both chambers. Those allegations range from inappropriate touching to sexual harassment and misconduct.

Multiple women have accused Minnesota Sen. Al Franken (D) of groping them; meanwhile Rep. John Conyers (D-Mich.) is fighting to keep his seat after several allegations of sexual misconduct and harassment, as well as a settlement with a former employee for $27,000 who claimed she was fired after refusing his advances.

Conyers, the longest-serving member in Congress, so far has denied the allegations and does not plan to resign. Franken has apologized.

While some individual House members, including Rep. Pramila Jayapal (D-Wash.) have called for Conyers to resign, Democratic leaders have stopped short so far of publicly advocating for his departure.

The New York Democrat called the allegations against Conyers "very, very serious" but added "you don’t want character assassinations, nor do you want victims that don’t get their day in court."

The House Ethics Committee is reviewing the allegations against Conyers in what is a separate process and investigation than what came out of the Office of Compliance.

Crowley said the Office of Compliance has "some very outdated, onerous hurdles for complainants to try to overcome before they can ever have their day in court. We are having very serious ongoing discussions about how we can reform that process."

"Again, I can’t sit and judge a member and call for the resignation unless I’ve been party to hearing all the evidence, and hearing the defense of the evidence," said the California Democrat, also a lawyer. "Trust me, I’ve prosecuted sexual harassment and employment discrimination cases, but, you know I have seen cases where there were cases without merit."

Reforms in the works, comprehensive review

The topic of sexual harassment — and how to upend a Capitol Hill culture that has allowed it to persist for so long — also cropped up during the weekly GOP caucus meeting yesterday, said Rep. Tom Cole (R-Okla.).

During what Cole called "a lively discussion," lawmakers talked about the bipartisan legislation sponsored by Reps. Jackie Speier (D-Calif.) and Barbara Comstock (R-Va.) that seeks to overhaul the sexual harassment reporting process on the Hill to strengthen protections for those who file complaints.

Cole said there was "a sense that the institution deserves better than this, and we’ve got an obligation to act and do something."

In that spirit, the House yesterday unanimously passed a resolution by voice vote that would require the chamber’s members, officers and employees to complete a training program during each legislative session in workplace rights and responsibilities.

"Today’s unanimous vote to mandate yearly sexual harassment training for members and staff is an important step to ensure Congress is a safe and respectful work environment for everyone," said House Majority Leader Kevin McCarthy (R-Calif.) in a statement.

"The House Administration Committee will continue its work to review and recommend updates to employment rules that govern the House of Representatives so that everyone who has the honor of working in Congress is free from harassment," he said.

The law, signed during the Clinton administration, applied several civil rights, workplace and safety laws to Congress and is enforced by the institution’s Office of Compliance. The leadership of the Administration Committee has to approve settlements that come through the OOC.

Harper said during the weekly GOP leadership press conference that since he became chairman at the start of this Congress he has "yet to have a single settlement come to my desk." Since 1997, nearly $17 million has been paid out on approximately 260 claims, Harper said.

The Mississippi Republican said his panel is trying to get a breakdown of how many of those claims involve sexual harassment by members. "I think that’s a fair question [and] something that we should be able to come up with," he said.

In addition to the Speier-Comstock bill, several House lawmakers introduced bipartisan legislation yesterday that would prohibit the use of federal funds to pay for any future sexual assault or sexual harassment cases involving members of Congress and their staff.

Additionally, the Office of Compliance would be required to make public within 30 days the details of any settlements made under the Congressional Accountability Act, which would include the one reached by Grijalva.

"Think about the incentive system under this regime now, if you are somebody who is in power you can misbehave, the taxpayer will bail you out and then keep it secret from everyone so your taxpayers and constituents will never know about it. That is wrong," said Rep. Ron DeSantis (R-Fla.), the bill’s co-sponsor.

Lawmakers said they had heard from constituents in recent days who were angry that Congress could keep workplace settlements private and pay them with federal funds without any public record.

"Congress has a 6 percent [approval] rating as a body, and I have one question to ask: Is it any wonder?" said Rep. Kathleen Rice (D-N.Y.), one of the co-sponsors of the DeSantis bill, who said public perception will not improve until lawmakers are willing to end special legal protections for themselves.