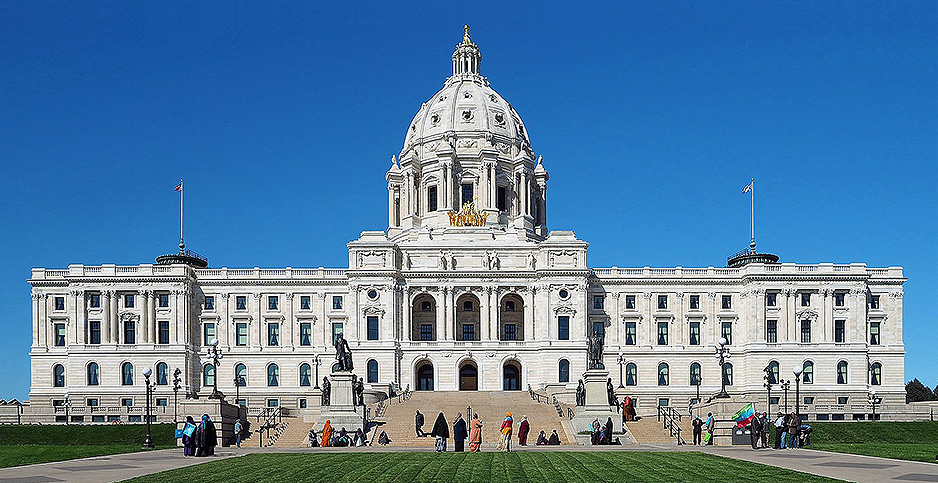 Minnesota lawmakers are set to reconvene April 14 with a focus on "mission critical" legislation during the novel coronavirus pandemic. State legislatures across the U.S. are grappling with fallout from COVID-19. McGhiever/Wikimedia Commons

From Denver to Des Moines, the novel coronavirus pandemic has state legislatures on pause as they grapple with a growing public health crisis and heed social distancing warnings.

Interruptions have left state budgets unfinished and other policy priorities in limbo. In some instances, they include proposals to accelerate the transition to cleaner energy and help remake the grid.

As the number of coronavirus cases — and deaths — continues to mount, at least half of state legislatures have postponed sessions, according to the National Conference of State Legislatures.

"If we were looking at a map, we could pick a state in every region where things have ground to a halt," said Kristy Hartman, director of NCSL’s energy program.

But pinning the interruptions on the virus is difficult, she added, because most of the delays happened within the past couple of weeks, and it’s impossible to say how quickly bills in individual states would have moved.

In some cases, consequences of deferring energy bills to the fall or until the next year are less meaningful. In other instances, bill supporters say stakes are high to get legislation passed this spring.

A solar industry boom in Illinois, for instance, is at risk of going bust while legislative lifelines remain suspended in the state’s Legislature. Funding for a state-run solar incentive program is tapped out for certain categories of projects, and the rest may soon be exhausted.

In Michigan, the clock is ticking for rooftop solar installers who face a statutory cap on distributed generation (Energywire, March 17).

In those states and beyond, environmental groups and some elected officials point to another crisis — climate change — as the impetus for action.

In Minnesota, the pandemic threatens to stall efforts by the Democratic-controlled House and Republican-led Senate to reconcile differences in clean energy legislation.

State Rep. Jamie Long (D) is the sponsor of the "Clean Energy First Act," a measure that passed the Minnesota House last year and is formed around goals set out by Gov. Tim Walz (D). The bill would require utilities in the state to use carbon-free energy by 2050 — a goal the state’s largest utility, Xcel Energy Inc., has also established for itself.

The state Senate has so far panned the notion of a 100% renewable requirement. But Long is hopeful that the Legislature will still coalesce around other parts of the bill when lawmakers reconvene.

"We are hopeful that the second and third pieces of that legislation are still possible this year," he said in an interview.

Minnesota’s Legislature is scheduled to reconvene April 14 and will be solely focused on passing "mission critical" and bipartisan legislation. Long thinks his bill fits the definition.

Before the pandemic, Minnesota was discussing a proposal to invest $80 million in a renewable development account on solar deployment, energy efficiency, electric vehicles and buses.

"We think it’s even more important now to get that money invested," Long said, referring to the economic fallout from the novel coronavirus and the need for economic stimulus.

Like in Minnesota, legislators in Michigan and Illinois were working through bipartisan energy bills when the pandemic brought business as usual to a halt in state capitols across the country.

In Illinois, work groups established by Gov. J.B. Pritzker (D) to reconcile differences among a half-dozen energy bills pending in the state have been suspended while the state focuses its attention on stopping the spread of the coronavirus.

Pritzker, in his State of the State speech in January, called for "urgent action" on clean energy legislation that promotes renewables and electrification of transportation.

The state, which has a long-standing goal to get 25% of its energy from renewables by 2025, is instead on track to reach just 8% renewables by the middle of the decade if nothing changes.

But Pritzker issued a different urgent call to action yesterday — an extension of a stay-at-home order through the end of the month.

The order raises questions about when, or if, the General Assembly will convene again before its recess on May 31. And if it does, is there bandwidth to grapple with and negotiate complex energy legislation?

"The government is focused on its response to COVID-19, as it should be," said David Kolata, executive director of the Citizens Utility Board, a consumer group that’s part of a coalition of environmental groups behind the "Clean Energy Jobs Act."

But "if we don’t act by June 1 on significant portions of ‘CEJA,’ there will be devastating consequences," he said.

June 1 is a deadline laid out by grid operator PJM Interconnection LLC related to the timing of its next capacity auction. It’s relevant to "CEJA" because the bill aims to fund new renewable development by pulling Chicago utility Commonwealth Edison out of the PJM capacity market and giving the responsibility to the Illinois Power Agency.

"CEJA" backers and Exelon argue consumers in and around Chicago are already forced to pay hundreds of millions of dollars in excess costs for coal- and gas-fired capacity — an amount that will increase in the future.

States such as Illinois that seek to withdraw from PJM’s next auction have until June 1 to pass legislation or they’ll likely be subject to one or more auctions locking them into the market for the next few years (Energywire, March 13).

Kolata views capacity market reform as one of the urgently needed provisions of the sprawling 365-page "CEJA" bill, which has drawn comparisons to the Green New Deal for its provisions that extend far beyond the grid to include EVs, electric buses and social programs such as job training for former coal workers.

Another key provision is Illinois’ solar funding cliff, he said.

It’s a view shared by developers, which are backing a different bill, the "Path to 100 Act," which wouldn’t require northern Illinois to withdraw from the PJM capacity auction.

"This is a very immediate need for the industry," said Nakhia Morrissette, central region director and counsel for the Solar Energy Industries Association.

The "Path to 100" bill, backed by SEIA and the American Wind Energy Association and their members in Illinois, would raise the state’s renewable energy standard to 40% by 2030. More importantly, it would provide funding to get there by enabling some 20,000 megawatts of new wind and solar development.

The bill would help sustain an industry that has created thousands of jobs and invested billions of dollars in new projects in Illinois. Now, however, economic benefits are at risk because incentive funding for most classes of projects has dried up, Morrissette said.

While legislative hearings are on hold and the governor’s attention is focused on slowing the spread of COVID-19, not all work has stopped. Parties in Illinois say they keep working to find common ground on legislation and continue a dialogue with legislators.

The same is true in Michigan, a state especially hard hit by the disease. While policymakers have had to shift their focus, the regulatory process hasn’t slowed down.

"We’re still trying to have conversations with legislators by Zoom and conference calls and keep pushing forward," said Laura Sherman, president of the Michigan Energy Innovation Business Council, a trade association whose members include solar installers.

Like in Illinois, the state’s rooftop solar industry, which already faced an uncertain future because of the cap on distributed generation programs, also faces the same pressures as thousands of other small businesses affected by statewide shelter-in-place orders.

"I’m hopeful we can get something done quickly" when the Legislature is back in session, Sherman said. "We may need to reassess how we move this forward when we come back."