Group aims to ‘open up’ DOD grants for climate adaptation 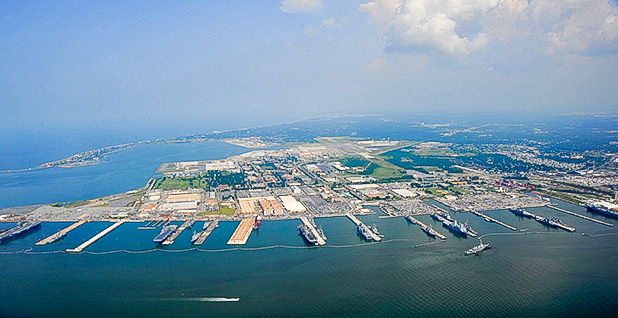 Some of the Navy’s largest coastal outposts rely on public infrastructure threatened by sea-level rise, but the Pentagon has no way to help military communities adapt.

The Seawall Coalition — a recently founded nonprofit advocacy group — is hoping to change that with this year’s defense authorization bill, which the House Armed Services Committee will mark up this week.

The group is pushing for a modification to the Defense Department’s Defense Access Roads program, which doles out grants to local communities for military transportation needs. As it is now, the program is limited in scope and can only fund roads where DOD has caused traffic to double, or where a base needs a new connection to the public road network.

"What we’re looking to do with this is open up the eligibility criteria for the program to include flood mitigation and adaptation infrastructure, sea-level rise projections, and recurrent flooding," said Melissa Roberts, executive director of the Seawall Coalition.

That could potentially remedy a major problem for military hubs like Hampton Roads in Virginia, which is facing dual threats to its coasts with climate change and a phenomenon known as land subsidence (Greenwire, Oct. 11, 2017).

The region is home to 16 major military installations, including Naval Station Norfolk, the world’s largest Navy base. Even though the military relies on public infrastructure — from roads to sewage and utilities — local and state governments are largely left footing the bill to keep areas above water during floods that are becoming more and more common.

"A prime example of where this could be put in place is somewhere like the Norfolk Naval Base, where the access road floods 10 times a year," Roberts said.

The House Armed Services Committee will mark up the full National Defense Authorization Act on Wednesday.

Roberts wouldn’t say who might offer an amendment to the DAR program or how, exactly, the group has been pushing the issue in Congress. But she said she hoped to see it at the NDAA markup, or at a markup of the House military construction spending bill tomorrow.

The coalition is a 501(c)(4) organization and is not required to disclose where its money comes from. Roberts said its financial backing comes from Matthew Eby, a former executive at the Weather Channel and founder of the New York-based First Street Foundation, which was set up recently to heighten awareness of sea-level rise and promote action.

Roberts said the coalition provides a policy platform and serves as a resource for its members, who include two congressmen who represent parts of Hampton Roads: Reps. Donald McEachin, a Democrat who sits on the Armed Services Committee, and Scott Taylor, a Republican House appropriator.

A spokeswoman for McEachin said he was not planning an amendment at Wednesday’s markup.

Whether or not the Seawall Coalition gets its wishes, a provision in the draft of the House authorization bill could have a similar effect.

The new grants would have significantly broader criteria for what the Pentagon could help fund than the DAR program. Roads, sewage and electrical infrastructure would all be eligible, and local governments would have to pay for only 20 percent of the project cost.

The program would make money available for projects that could enhance "military value, resiliency, or military family quality of life" at a given installation.

Not all of that would go toward sea-level-rise adaptation, but the grants have the potential to fill important funding gaps in coastal communities, said Skip Stiles, executive director of Wetlands Watch, a nonprofit group working on sea-level rise in Hampton Roads.

"This is really big for us," he said.

DOD has repurposed its Joint Land Use Studies — which are usually used to examine encroachment of local communities on military installations — to assess sea-level rise in Hampton Roads. While local advocates say that effort has helped, money to raise roads and make sewage and electrical infrastructure more resilient is lacking.

"The timing of this is perfect because there’s the need — the rising concern — and we’re beginning through these Joint Land Use Studies to identify the specifics of the need," Stiles said. "And if this program comes in place by the time that those land-use studies are analyzed, we could be on our way."

Committee staff touted the grant program at a briefing last month but would not divulge which members requested specific provisions.

But even if the grant program passes muster in the authorizing process, it would still need funding.

That could be a more difficult task.

House Armed Services Chairman Mac Thornberry (R-Texas) has proposed saving money at the Pentagon by cutting, among other things, the Office of Economic Adjustment, where the proposed grant program would likely be housed.

And with a bloated DOD budget, civilian programs are sometimes left behind in the appropriation process in favor of those that relate more directly to military operations.

Meanwhile, a purported cost-cutting provision in the House authorization is raising concern.

The language would amend the Marine Mammal Protection Act to allow DOD to apply for incidental take permits and reviews for activities that could harm marine mammals, including whales and dolphins, every 10 years instead of every five years.

Lara Levison, senior federal policy director at Oceana, said, "The Navy wants to weaken protections for whales, dolphins and other marine mammals from the use of sonar and underwater explosives — not because these protections are impairing military readiness, but simply to save time and money. Extending environmental reviews and permitting for Navy activities from five to 10 years could put many marine mammal species, which are extraordinarily difficult to study and monitor, at greater risk of harm or even extinction."

The military could be required to make better plans for climate change.

"To me, everything that forces another consideration in this context is good," said retired Rear Adm. Ann Phillips, who sits on the advisory board at the Center for Climate and Security. "The challenge in the installation master planning process is that they still aren’t using predictive flood mapping, they still aren’t looking at what will happen to Naval Station Norfolk beyond 20 years."

DOD planners — to some extent — already consider climate change, and the Pentagon has opted to keep its climate programs in place, despite the outlook of the Trump administration.

But Phillips said the provision would give DOD some political cover and encourage it to better consider the long view.

"The idea that you’re going to have to look long term at what’s going to become a challenge is not yet ingrained," she said.