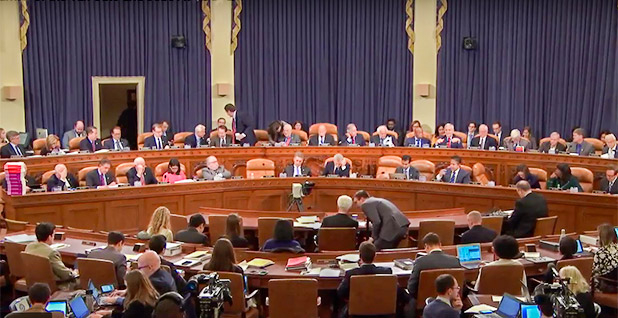 Interest groups are stepping up efforts to sway senators on key energy tax incentives ahead of this week’s planned release of the Senate’s tax overhaul.

Meanwhile, the House Ways and Means Committee aims to wind down debate on its own bill today, in what is expected to be a marathon session.

Looking to capitalize on a key renewable win in the House, other renewable sectors yesterday urged top House and Senate tax-writers to expand the eligibility for qualifying for the investment tax credit to include hydropower, biomass, biogas and waste-to-energy facilities.

The House proposal would extend the ITC for "orphaned" sources left out of a 2015 tax deal, including small wind, fuel cells, and combined heat and power.

Arguing they provide "baseload" renewable power, the groups are seeking "parity and a level playing field for all renewable energy technologies" in any tax overhaul, they wrote.

The letter, sent by the National Hydropower Association, Biomass Power Association, American Biogas Council and Energy Recovery Council, notes that their facilities previously qualified for half the ITC, as well as the production tax credit for "baseload technologies" that lapsed last year.

The Senate bill, which Finance Chairman Orrin Hatch (R-Utah) said yesterday will be released tomorrow, is expected to hew to the 2015 deal that extended and phased down the PTC and ITC over a period of roughly five years.

The House plan sticks to that schedule but would reduce the value of the PTC and impose new construction requirements for qualification.

Dozens of environmental groups yesterday urged lawmakers to oppose adding to the tax package the expanded 45Q carbon capture and sequestration credit that has bipartisan support in both chambers.

"It is the height of absurdity to pay the oil and gas industry for waste to be used to produce even more dirty fossil fuels. We need expansive clean renewable options not more subsidies for Exxon-Mobil and their ilk," Center for Biological Diversity senior counsel William Snape said in a statement.

That bill is supported by Sen. Heidi Heitkamp of North Dakota, one of several moderate Democrats facing re-election next year who huddled with the White House yesterday to try to find some common ground on taxes.

She told reporters yesterday that she expects the Senate bill would be far different from the House legislation.

With only a two-seat cushion to pass any legislation under budget reconciliation rules, winning over some red-state Democrats like Claire McCaskill of Missouri could help safeguard against any Republican opposition.

McCaskill said yesterday she’s concerned Democrats will be given too little time to review the tax plan before the Finance Committee marks it up next week.

"Hopefully, they are going to give us some time to have reasonable input; either they want a bipartisan deal or they don’t," said McCaskill, a Finance member. "So far … it looks like a Republican deal to just get Republican votes. I hope I am wrong, but that’s what it looks like."

But West Virginia Democratic Sen. Joe Manchin said the White House appeared genuine in wanting to work with Democrats, while noting the House overhaul is "not the president’s bill."

Whatever tax bill emerges from the Senate Finance Committee will be combined with legislation being drafted by the Senate Energy and Natural Resources Committee to open up energy exploration in the Arctic National Wildlife Refuge. The Senate GOP budget, adopted last month, called for drilling in ANWR to help cover the cost of the tax package.

Energy Chairwoman Lisa Murkowski (R-Alaska) said yesterday she hopes to have a markup of that bill next week.

While Chairman Kevin Brady (R-Texas) intends to finish the markup today or tomorrow, debate yesterday proceeded at times at a leisurely pace, as members awaited further revisions expected in another revised chairman’s mark.

Democrats used the time to hammer the GOP bill.

During a broad denunciation of the legislation, Rep. Earl Blumenauer (D-Ore.) estimated the changes to PTC and ITC renewables threaten $50 billion in investments, as he ticked off projects in the home states of Midwest Republicans on the panel.

However, Blumenauer did not offer an amendment addressing the issue. That could surface today, during what Brady said will likely be a late night. The panel is scheduled to resume the markup at 9 a.m.

Rep. John Larson (D-Conn.), a Ways and Means Committee member, yesterday said he is still hoping to offer what he calls a pollution tax, which would place a new federal levy on carbon at its source.

He said Republican committee leaders have yet to determine if the amendment is germane and will get a vote.

"I still intend to offer the concept and appeal to the president and say look at this instead of straining everybody and going deep into the tax code where you have winners and losers … why not come up with something you could achieve," Larson said.

Larson said the bill would not only raise the $1.5 trillion to cover the cost of the GOP tax plan but would also raise money that could be used for building new infrastructure, avoiding spikes in energy prices and making sure coal miners’ pensions are funded.

Unlike the Senate, there appears to be no real effort to attract Democratic support, and the minority has responded in kind.

"This is not a serious attempt at tax reform and certainly not bipartisan," Minority Whip Steny Hoyer (D-Md.) said yesterday.

Republicans were united in defeating Democratic amendments, including proposals to sunset the tax bill and restore state and local tax deductions eliminated by the measure.

But the GOP continues to face familiar pressure from outside conservative groups, such as the Club for Growth, which called for changes to what it called "millionaires’ tax rates" created by the bill, as well as a faster death to the estate tax, among other issues.

House GOP leaders are resisting conservative efforts to try to repeal Affordable Care Act taxes in the overhaul, a move that could raise significant revenues but one that could also jeopardize the legislation.

"I think our tax bill has a lot to offer," said Rep. Carlos Curbelo (R-Fla.), a moderate on the tax-writing panel. "To introduce what is a controversial component would muddy that picture."