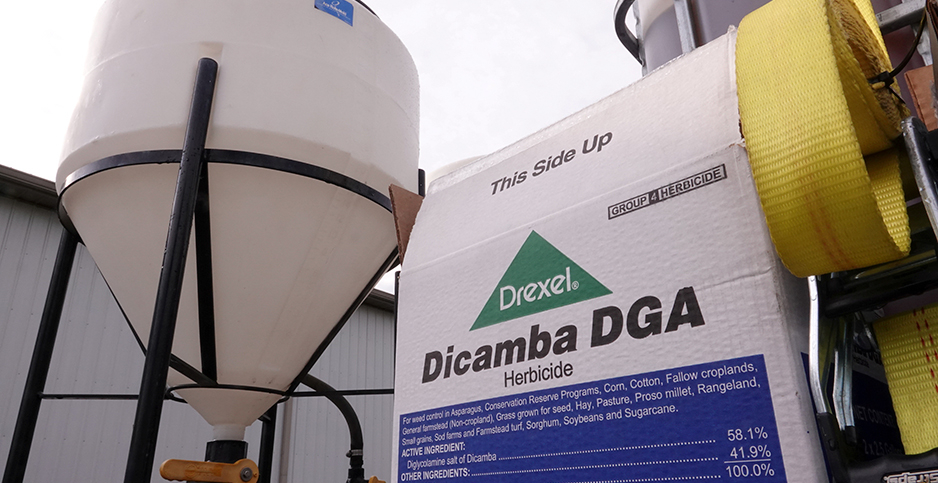 A box of the herbicide dicamba sits on a truck bed at a farm in Ridgely, Tenn., in this 2019 file photo. Karen Pulfer Focht/Reuters/Newscom

Crop growers may no longer spray the weedkiller dicamba after a federal appeals court found that EPA "substantially understated" risks when it approved use of the chemical herbicide.

The 9th U.S. Circuit Court of Appeals scrapped a registration decision and three related approvals in which EPA found that dicamba wasn’t likely to be carcinogenic to humans. But researchers at the National Institutes of Health earlier this year said the herbicide can increase the risk of liver cancer and other cancers.

Soybean and cotton industry groups say dicamba is a critical tool for farmers and can prevent billions of dollars in crop loss. The 9th Circuit said it took that information into consideration when reaching its decision.

"We acknowledge the difficulties these growers may have in finding effective and legal herbicides to protect their [dicamba-tolerant] crops if we grant vacatur," Judge William Fletcher wrote in an opinion yesterday. "They have been placed in this situation through no fault of their own.

"However, the absence of substantial evidence to support the EPA’s decision compels us to vacate the registrations."

Fletcher, a Clinton appointee, said he and his colleagues considered whether to simply send the registrations back to the agency but found that the "’fundamental flaws’ in the EPA’s analysis are so substantial that it is exceedingly ‘unlikely that the same rule would be adopted on remand.’"

"Today’s decision is a massive win for farmers and the environment," George Kimbrell of the Center for Food Safety, lead counsel in the case, said in a statement yesterday. "It is good to be reminded that corporations like Monsanto and the Trump Administration cannot escape the rule of law, particularly at a time of crisis like this.

"Their day of reckoning has arrived."

The ruling was a major setback for Bayer AG, which recently acquired Monsanto Co. and absorbed legal liability for the company’s weedkilling products.

"We strongly disagree with the ruling and are assessing our next steps," Bayer said in a written statement. "We will also await direction from the EPA on actions it may take in response to the ruling."

EPA said it is reviewing the 9th Circuit’s ruling and will work to carry out the court’s instructions.

Bayer said it stands behind XtendiMax, one of the products EPA had approved, and is working to secure a new registration by the fall. The 2018 registration was set to expire in December.

Introduced into the United States in 1967, dicamba was initially applied ahead of the planting season to fight broadleaf weeds. That changed with the introduction of cotton and soybeans bred to resist it, and EPA approved "over-the-top" uses on the genetically engineered crops in 2016.

Those crops, in turn, have seen a boom; the Department of Agriculture’s Economic Research Service said the use of dicamba-resistant seed grew 43% from 2016 to 2018.

With expanded use on already-growing crops came more incidents of spray drift to neighboring fields, including to soybeans not bred for resistance. As much as 5 million acres of crops, trees and backyard gardens were contaminated from 2016 to 2017, according to the Center for Biological Diversity, another challenger in the 9th Circuit case.

The drift dangers have sparked state-level restrictions, as well. In Illinois, the state Department of Agriculture asked EPA to approve Illinois-specific labels with various restrictions, including not applying dicamba if the temperature is over 85 degrees Fahrenheit and not using it after June 20.

A spokeswoman for the American Soybean Association didn’t have an immediate comment this morning on the 9th Circuit ruling, but in a letter last month to EPA Administrator Andrew Wheeler, the group joined the National Cotton Council of America in urging the agency to keep dicamba available to growers.

"Like many stakeholders, we agree there have been and continue to be off-target challenges with dicamba use," the groups said. "However, we have seen the beneficial impacts brought by EPA’s label revisions, coupled with improved education efforts taken by the agency, research and extension personnel, grower groups, retailers, and registrants."

They added, "We believe the benefits of the continued availability of dicamba for use on dicamba-tolerant crops greatly outweigh existing risks."