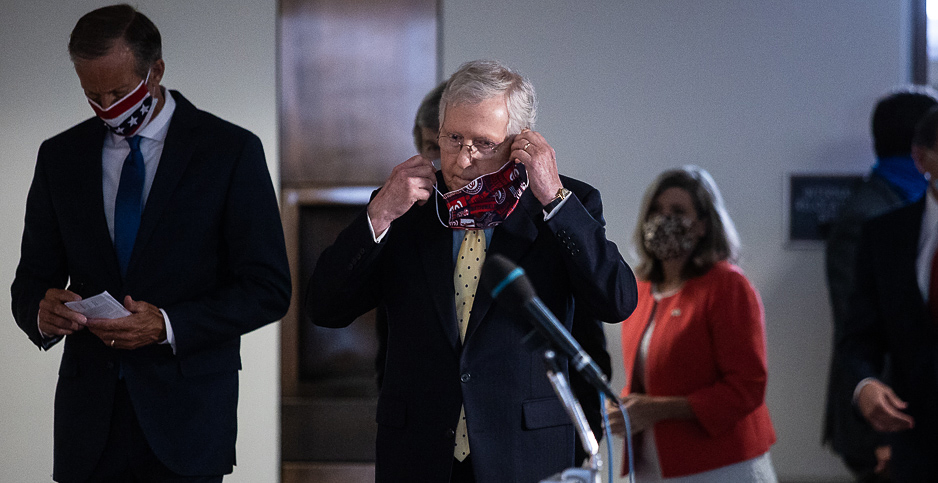 An assortment of interests are stepping up pressure on Capitol Hill to include assistance for struggling clean energy sectors in the upcoming COVID-19 relief package that lawmakers are hoping to enact in the coming weeks.

The new push — which includes industry groups, environmentalists, governors and major corporations — comes as the Trump administration and House and Senate lawmakers kicked off formal negotiations yesterday on a new phase of pandemic assistance that — like past talks — is focused more broadly on immediate economic and public health challenges (E&E Daily, July 21).

But advocates are pointing to the roughly 600,000 clean energy jobs lost since the pandemic hit in March to argue for assistance in the next phase.

A coalition that includes dozens of environmental and industry trade groups as well as state and local government officials today will send a letter to Senate leaders calling for the inclusion of $20 billion in the next pandemic bill for a nonprofit Clean Energy and Sustainability Accelerator that was passed by the House earlier this month as part of Democrats’ $1.5 trillion infrastructure package, H.R. 2.

"The opportunity to build the infrastructure to generate, move, store and use clean and efficient energy is nearly boundless," said the letter, led by the Coalition for Green Capital.

Based on legislation — H.R. 5416 and S. 2057 — to establish a national climate bank, the House-passed measure would fund projects deploying renewable energy, efficiency and electric grid upgrades, as well as reforestation and efforts to boost climate resilience in infrastructure.

Among the nearly 100 signatories were major environmental groups such as the Natural Resources Defense Council and League of Conservation Voters, as well as the Solar Energy Industries Association (SEIA) and Energy Storage Association — groups that have pressed lawmakers for COVID-19 relief in past talks.

SEIA yesterday released a letter to House and Senate leaders from dozens of major corporations, calling for action on climate in pandemic talks.

"We are large consumers of energy and, while navigating and addressing the complex business impacts of Coronavirus Disease of 2019 (COVID-19), we all agree that we cannot put on hold our efforts to combat climate change," wrote the companies, which include McDonald’s Corp. and Tyson Foods Inc.

The companies want lawmakers to extend the production and investment tax credits, as well as the ability to convert the breaks to direct payments to account for the difficulties in monetizing the breaks during the pandemic.

Republican senators yesterday struck a preemptive blow against extending the PTC for wind (Greenwire, July 21), but The Wall Street Journal reported that there’s a new corporate push to broadly make tax credits refundable in the next package.

Separately, the United States Climate Alliance — a coalition of 25 states — urged lawmakers yesterday to appropriate $500 billion in emergency aid for state and local governments in the next COVID-19 package, as well as an unspecified amount of infrastructure investments "to put the nation on the path to economic recovery, reduce greenhouse gases, improve public health through cleaner air, and build more resilient communities and economies."

Senate Republicans yesterday began to sketch out the components of their COVID-19 package, which Majority Leader Mitch McConnell told reporters was "a starting place" to guide talks.

That measure will include more aid for small businesses, additional direct payments and $105 billion to help schools reopen in the fall — an amount the Kentucky Republican noted is larger than what House Democrats had put aside for that purpose.

"It’s amazing how you can find room to fund serious priorities when you take a pass on the far-left daydreams," McConnell said.

However, Senate Republicans have yet to agree on other issues, including President Trump’s desire to see a payroll tax holiday included. Some GOP senators are also vowing to oppose additional state and local government assistance — a top priority of Democrats.

"I’ll do everything I can to make sure we don’t bail out states," said Sen. Rick Scott, the former GOP governor of Florida.

However, Republicans are united behind the idea of including broad liability protections in the next relief bill.

"I won’t put a bill on the floor that doesn’t have liability protection in it," McConnell told reporters after the caucus’s weekly luncheon, attended by Treasury Secretary Steven Mnuchin and White House chief of staff Mark Meadows.

"Don’t mischaracterize what this is about," McConnell added. "This is not just for businesses. It’s for hospitals, doctors, nurses, yes, businesses, but also colleges, universities, K through 12."

Senate Democrats slammed McConnell’s insistence on the provision, which Minority Whip Dick Durbin (D-Ill.) called unnecessary because there have only been 15 consumer personal injury cases filed this year related to the pandemic.

"There is no tsunami," Durbin told reporters. "There is no flood. What Senator McConnell is trying to do is capitalize on this moment of uncertainty in America to close down the responsibility of businesses, to make certain they do everything reasonably possible to protect their customers and their employees. That’s what it comes down to."

Another challenge is the calendar. McConnell said yesterday he plans to "soon" introduce a bill, which he hopes to pass before the Senate leaves for recess on Aug. 7.

The House is scheduled to leave town at the end of next week, although Majority Leader Steny Hoyer (D-Md.) said yesterday that the chamber could return if a deal is reached.

"We’ll take whatever time is needed whenever it is needed," he told reporters.