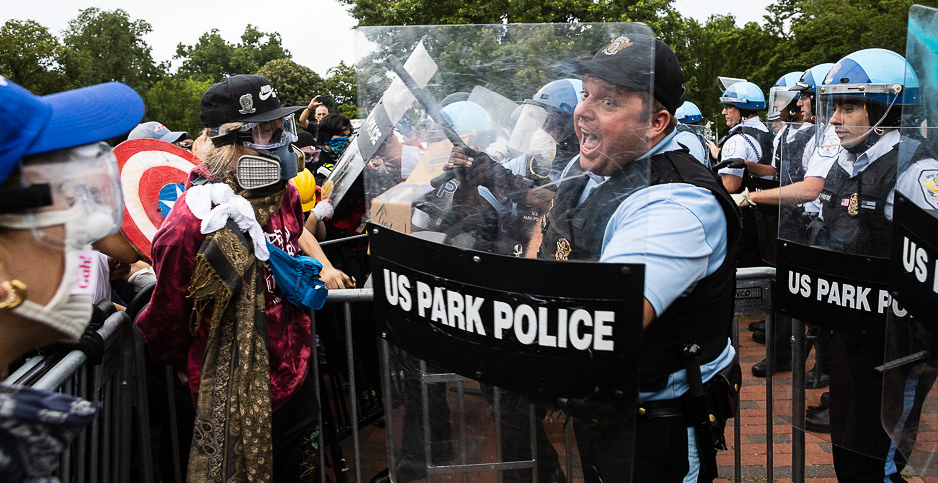 An Army National Guard officer set to testify before a House panel tomorrow will challenge U.S. Park Police officers who claim that they did not use tear gas to violently break up a crowd of peaceful protesters outside the White House on June 1.

"The Park Police liaison officer told me that the explosions were ‘stage smoke,’ and that no tear gas was being deployed against the demonstrators," Adam DeMarco, an Iraq War veteran who now serves as a major in the D.C. National Guard, wrote in advance testimony released by the House Natural Resources Committee, which plans a hearing on Park Police tactics tomorrow morning. "But I could feel irritation in my eyes and nose, and based on my previous exposure to tear gas in my training at West Point and later in my Army training, I recognized that irritation as effects consistent with CS or ‘tear gas.’"

U.S. Park Police acting Chief Gregory Monahan is also expected to testify before the panel. While it is uncertain what Monahan will say to defend his officers, DeMarco’s testimony makes clear that the police chief will be in the hot seat.

Monahan last month said Park Police officers had to respond to a violent crowd of protesters as they cleared a path for President Trump to pose for photographs outside Lafayette Square.

But DeMarco will say in his testimony that he saw no signs of aggression on the part of protesters.

"The events I witnessed at Lafayette Square on the evening of June 1 were deeply disturbing to me, and to fellow National Guardsmen," he said in his written testimony.

"Having served in a combat zone, and understanding how to assess threat environments, at no time did I feel threatened by the protestors or assess them to be violent. In addition, considering the principles of proportionality of force and the fundamental strategy of graduated responses specific to civil disturbance operations, it was my observation that the use of force against demonstrators in the clearing operation was an unnecessary escalation of the use of force.

"From my observation, those demonstrators — our fellow American citizens — were engaged in the peaceful expression of their First Amendment rights. Yet they were subjected to an unprovoked escalation and excessive use of force."

DeMarco concluded his testimony by quoting the late Georgia Democratic Rep. John Lewis: "When you see something that is not right, not just, not fair, you have a moral obligation to say something, to do something."

DeMarco added: "The oath I swore as a military officer, to support and defend the Constitution of the United States, is a bedrock guiding principle and, for me, constitutes an individual moral commitment and ethical instruction. It is the foundation of the trust safely placed in the Armed Forces by the American people. And it compels me to say something — and do something — about what I witnessed on June 1 at Lafayette Square."

The Natural Resources Committee, led by Democratic Rep. Raúl Grijalva of Arizona, is holding its second hearing on the Park Police’s handling of the crackdown in Lafayette Square last month.

The Park Police reassigned two of its officers after they were captured on video assaulting two Australian journalists who were covering the event on live television (Greenwire, June 4).

At the first hearing last month, Grijalva called the police actions an "indefensible attack" against protesters who were demanding justice after the Memorial Day killing of George Floyd, an unarmed Black man who died under the knee of a Minneapolis police officer (E&E Daily, June 30).