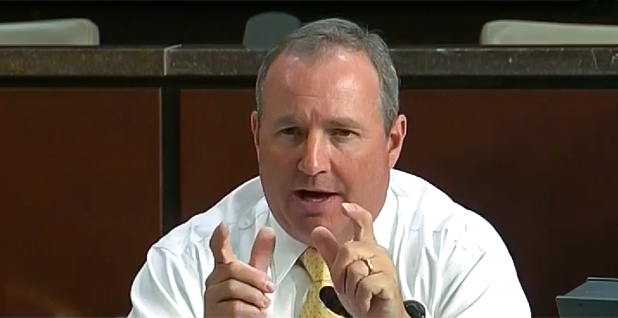 House Republicans are eyeing possible changes to controversial gun provisions in a sportsmen’s package that stalled in the wake of the Las Vegas shooting massacre with hopes of reviving it by the end of the year.

"When I was given a list of issues that they wanted to have done before Christmas, that was on the list," House Natural Resources Chairman Rob Bishop (R-Utah) told E&E News this week when asked about the status of H.R. 3668, the "Sportsmen’s Heritage and Recreational Enhancement (SHARE) Act," that was approved by his committee last month.

The legislation combines a loosening of gun restrictions with easing up certain wildlife protections. Backers were betting that by combining two Republican priorities the bill would attract broad GOP support and move quickly in the House, but that was before the largest mass shooting in U.S. history.

Gun control advocates and Democrats have since attacked provisions that would make it easier to buy silencers, also called suppressors, for firearms to protect the hearing of gun users. The legislation includes language that would end the federal registry required for silencers (E&E Daily, Oct. 6).

The bill would also limit federal restrictions on wildlife-poisoning lead ammunition and fishing tackle and scale back federal protections for gray wolves in the western Great Lakes and Wyoming. While environmentalists have decried those provisions, they have the backing of most in the GOP and are not expected to change.

Rep. Jeff Duncan (R-S.C.), the sponsor of the bill and a co-chair of the Congressional Sportsmen’s Caucus, told E&E News this week there has been "sort of a cooling off period" for the measure in the wake of the massacre that left 59 people dead, including the gunman. He said over the past week he has approached leaders about how to get the legislation moving again toward the House floor.

According to Duncan, there are several options including dropping the silencer provision altogether and replacing it with other gun language. He said one idea could add language that would ban or require more stringent licensing for buying bump stocks, a plastic attachment added to semiautomatic weapons that allows them to fire far more rapidly.

The Las Vegas shooter used a bump stock, leading to widespread calls among Democrats and gun control advocates for banning their sales. The National Rifle Association has said it supports additional restrictions on bump stocks but suggested any changes should be made by the Bureau of Alcohol, Tobacco, Firearms and Explosives.

Duncan also said there might be support for dropping the silencer provision if it were replaced with national reciprocity protections for gun owners. In the wake of the shootings, some GOP lawmakers have pressed for the law that would allow for concealed weapons permits issued by individual states to apply nationally, even in states that do not allow for them.

Duncan said it was too soon to say what compromises would be worked out, but he also said he is working to correct "misinformation" spread about the bill that has even made some moderate Republicans uneasy about voting on it. He said he would like the final package to contain the silencer provisions, some language on bumpstocks and national reciprocity.

Duncan also is eager to stress the bill would benefit hunters by giving them more access across public lands. "There’s a lot of stuff in there for sportsmen," he said.

If the gun provisions were to survive in the House, the legislation would face long odds in the Senate, where Democrats would likely filibuster it.