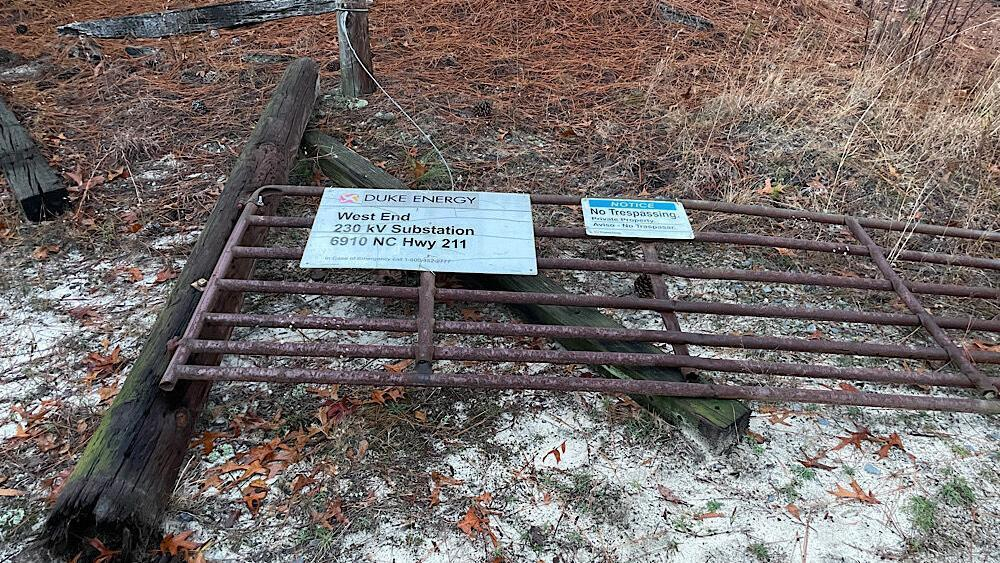 This photo shows the gate to a substation in Moore County, N.C., on Sunday. Tens of thousands were without power in the county after what authorities say was an act of criminal vandalism at multiple substations. John Nagy/The Pilot via AP

Tens of thousands of residents in rural North Carolina could be without electricity for days after gunfire seriously damaged two power substations.

The Saturday attack on the substations — located in Moore County, about 90 miles east of Charlotte — “wasn’t random,” said Moore County Sheriff Ronnie Fields. Someone drove up and “opened fire on the substation, the same thing with the other one,” Fields told reporters.

About 45,000 households and businesses remained without electricity Sunday, as temperatures were forecast to drop below freezing. The county declared a state of emergency, setting a curfew Sunday night and closing schools Monday.

Duke Energy Corp., the region’s power provider, said most customers should expect an “extended outage that could last until Thursday.”

“Duke Energy is pursuing multiple repair paths to restore as many customers as possible, as quickly and safely as possible, ” said Jason Hollifield, Duke Energy’s general manager of emergency preparedness, in a statement on the company’s website. “This is a significant local outage that is affecting nearly all customers in Moore County.”

Duke Energy spokesperson Jeff Brooks told E&E News that “more than one category of equipment was hit.” While Duke Energy has spares to replace the damaged equipment, the repairs are complex, he said.

Brooks would not discuss what equipment was damaged, citing an active investigation. The Pilot newspaper in Moore County reported that one substation’s infrastructure was “heavily damaged,” and a gate was lying in an access road.

One critical vulnerability of substations are the transformers, which raise and lower voltages so power can flow from power lines to buildings. Transformers require a coolant to prevent overheating and damage, and supply chain disruptions have made it hard for utilities to acquire new ones (Energywire, Oct. 20).

Andrew Wills, senior adviser for the Office of Cybersecurity, Energy Security and Emergency Response at the Department of Energy, said on social media that DOE was monitoring the attack and working with Duke Energy and officials at all levels to identify the cause of the attacks “and respond accordingly.”

Gunfire attacks on substations — especially ones that cause widespread outages — are rare.

In 2016, an unknown gunman knocked out a substation in rural Utah with just a few shots from a high-powered rifle, cutting off electricity to 13,000 customers for a day. The utility said replacing a damaged transformer would cost $1 million and take six months, forcing operators to reroute electricity to customers (Energywire, Oct. 6, 2016).

The most consequential substation attack in the U.S. occurred in 2013, when a gunman or gunmen fired an estimated 100 rifle rounds at Pacific Gas & Electric Co.’s Metcalf substation in Coyote, Calif., near San Jose. No outages occurred because PG&E operators were able to divert power flows away from the substation.

The attack remains unsolved, but it led to an unusually swift response by the Federal Energy Regulatory Commission. The North American Electric Reliability Corp. drafted new defensive policies for the most important high-voltage substations, which were then adopted by FERC. FERC approved the resulting infrastructure protection regulation, CIP-014, in November 2014.

Although there is no official record of utilities’ compliance actions, some industry experts estimate that North American utilities have spent up to $1 billion since that 2014 regulation in upgrades. That includes shielding high-voltage transformers, improving fencing and monitoring substations, as well as increasing redundant facilities so that if one important substation were knocked out, it would not cause widespread outages.

However, the FERC rules do not apply to the tens of thousands of state-regulated distribution substations, with medium- and lower-voltage transformers.

Brooks, the Duke spokesperson, would not say whether the two substations hit Saturday were in that category and thus not subject to FERC regulation. But one official, who was not authorized to speak on the record, said that based on the amount of customers losing power and the location of the outage, the substations were not likely part of the regulated federal interstate systems.