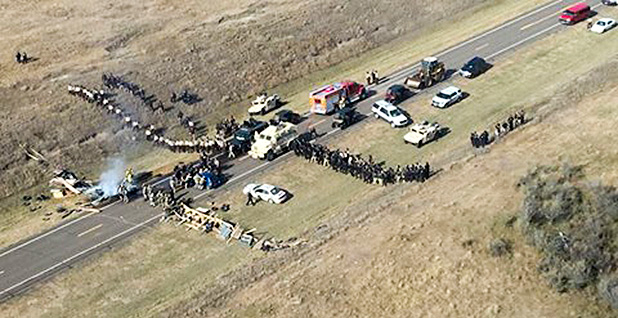 Protesters and law enforcement stand off near the Dakota Access pipeline corridor. Photo courtesy of the Morton County Sheriff's Department via Facebook.

Officers’ attempts to move the group from a state highway along the pipeline corridor south of Bismarck led to an armed standoff, with protesters ultimately surrounded and forced to retreat down the road toward the encampment where many of them have stayed for months. This morning protesters were still holding ground south of where the standoff began.

It is unknown how many protesters were present during the standoff, but 141 had been arrested as of midnight. They will face various charges ranging from public nuisance to engaging in a riot to conspiracy to endanger by fire/explosion. Some others voluntarily returned to camp and were not arrested.

Many details of the confrontation remain unclear. According to the Morton County Sheriff’s Department, one woman fired a gun at officers while being arrested. No officers were injured in the incident.

The department confirmed one other report of a shooting involving a "private individual." Tribal activists streaming live videos of the day’s events say a protester on horseback was also shot. A spokesman for the sheriff’s department did not confirm such an incident last night.

The North Dakota State Highway Patrol and officers from several North Dakota counties and other states began the "operation" to move protesters from the road and pipeline right of way yesterday afternoon. Officers moved the group by slowly advancing in a line backed by armored vehicles.

They occasionally used pepper spray and a "long-range acoustic device" that sends a high-pitched warning tone to disperse the crowd. In live videos posted to Facebook, most officers on the front lines were seen holding batons and wearing riot gear.

A pile of debris used for the barricade was in flames for much of the confrontation, though it’s unclear who started the fire. Other fires burned nearby, and the sheriff’s department says protesters have thrown Molotov cocktails and other debris at law enforcement. Videos from the scene showed disagreement among protesters about whether to comply with commands from law enforcement.

According to Morton County Sheriff Kyle Kirchmeier, the forceful removal was the only way to clear the state highway after negotiations with camp leaders broke down.

"We’ve been at this for 2 ½ months and trying to come to a very safe and peaceful resolution to this situation, and that’s by letting the protesters have their voice," he said yesterday during a press conference. "And like I’ve said many times before, as long as it was done legal and lawful, there’s absolutely no issues with it.

"But from the point last Sunday that they made the stance to block public roadways, state highways and a Morton County gravel road and then just taking and encamping on private property is against the law, and we can’t let that continue to happen," he added, saying protesters forced the department’s hand.

North Dakota Gov. Jack Dalrymple (R) was on-site at the sheriff’s department. He said during a press conference that the officers had made "excellent progress" in clearing the roads.

"Going forward, we’ll finish this operation," he said. "Hopefully, we have persuaded these protesters that our state highways, county highways, private property is not the place to carry out a peaceful protest. And we will stand by that for as long as we have to."

Standing Rock Sioux Tribe Chairman Dave Archambault II said he would "continue to pray for peace" and renewed calls for the Justice Department to send overseers to monitor the interactions between law enforcement and protesters.

"If harm comes to any who come here to stand in solidarity with us, it is on their watch," he said in a statement last night. "They must step in and hold the state of North Dakota and Morton County accountable for their acts of violence against innocent, prayerful people."

Archambault also called on protesters to be peaceful, saying "any act of violence hurts our cause and is not welcome here."

The Sioux sparked the massive opposition effort from tribes and environmentalists when it sued the Army Corps of Engineers for granting several approvals for the pipeline in July. Though the project is sited mostly on private land, much of the route near the Standing Rock Indian Reservation was ancestral tribal land promised to the Sioux in an 1800s treaty with the U.S. government.

While federal courts have allowed construction to move forward on private land, the Obama administration is still considering a final approval for Dakota Access to complete a section of the pipeline across federally managed land at Lake Oahe, a dammed section of the Missouri River.

Until then, the company has said it plans to continue building up to the edge of that area. Construction is continuing today and is slated to cross Highway 1806, the center of yesterday’s confrontation, within days.

Kirchmeier said law enforcement officers will remain in the area "as long as it takes" to make sure the road remains clear.