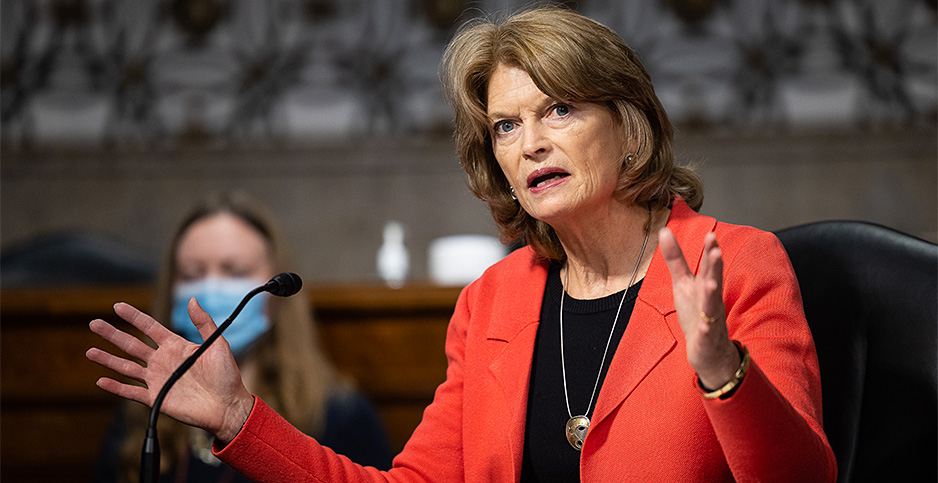 While expressing doubts about Haaland’s possible approach to energy development, Republican Sen. Lisa Murkowski of Alaska joined all of the panel’s Democrats in voting for President Biden’s nominee.

"As a former governor, I understand the importance of having one’s own team in place. It is especially important that the president have the department heads he wants, since they make up his Cabinet," said Sen. Joe Manchin (D-W.Va.), the committee’s chair.

The closely watched thumbs-up today from Murkowski, combined with a statement of support offered yesterday by Republican Sen. Susan Collins of Maine, means Haaland is effectively assured of Senate approval. Murkowski noted that she had met twice privately with the nominee.

"I am going to place my trust in Rep. Haaland and her team despite some very real misgivings," Murkowski said.

"They recognize that this is a truly historic nomination, and … they believe that Alaska Native issues can be elevated to one of the highest levels of government," Murkowski said.

Still, Haaland, a liberal lawmaker now in her second House term, will have to sustain her momentum to prevail over GOP conservatives who resist her nomination (E&E Daily, Feb. 25).

"Representative Haaland’s extreme policy views and lack of substantive answers during the hearing, to me, disqualify her for this job," said Sen. John Barrass of Wyoming, the panel’s senior Republican.

Barrasso added that "if she’s allowed to pursue her Green New Deal-inspired policies at the Department of Interior, she will run Wyoming’s and other states’ economies into the ditch."

The committee’s vote late this morning followed a hearing that stretched over two days last week and focused on relatively few of the myriad issues facing Interior (Greenwire, Feb. 24).

The 60-year-old member of the Laguna Puebl Native American people, for instance, was not really pressed on specifically how she would fulfill her promises, which include improving the federal government’s relations with 574 recognized Native American tribes and Alaska Native villages.

Instead, GOP lawmakers pressed Haaland about her previously articulated positions, particularly dealing with energy development. Haaland didn’t disavow those positions, but frequently cited limits that would be imposed by a Cabinet secretary position.

"I will tend to support President Biden’s positions, and if I am confirmed as secretary, it is his agenda that I would seek to move forward," Haaland said, repeatedly.

Hundreds of subsequent written "Questions for the Record" delved into many more agency and policy details, though Haaland’s answers again tended toward the general.

"I look forward to learning more, if confirmed, on the status of the Department’s reorganization and consider input on ways to improve its functioning for the American people," Haaland advised one senator.

In a similar vein, Haaland wrote, "If confirmed I look forwards to learning more about grizzly bear recovery in the Greater Yellowstone ecosystem," and "If confirmed, I will work with Interior staff to understand the current process for prioritizing maintenance needs at national parks."

An early post-confirmation test could come with her consideration of reversing the Trump administration’s moving the Bureau of Land Management’s headquarters to Grand Junction, Colo. E&E News PM, Feb. 9).

Haaland wrote that "if I am confirmed, I will look forward to consulting with everyone involved in this issue and I understand that we absolutely need to make sure that we have a full team at BLM and that our leaders can be accessible to the American people."

She added, "It is my understanding that 90 percent of Interior employees are based outside of D.C. and I look forward to learning more about how the BLM is functioning, despite the significant loss of personnel from the recent reorganization."