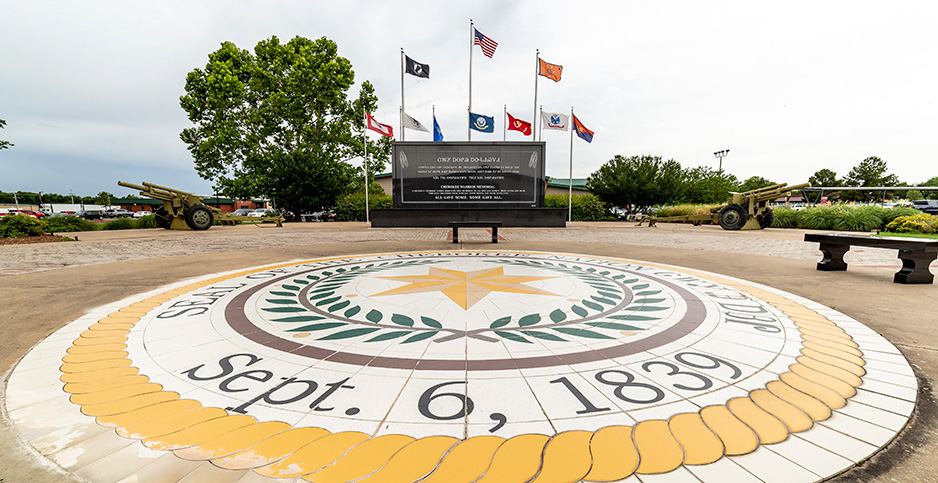 The seal of the Cherokee Nation at the Cherokee War Memorial on the nation's capital complex in Tahlequah, Okla. Brent Soule/ZUMA Press/Newscom

Interior Secretary Deb Haaland approved the Cherokee Nation’s constitution with protections for Freedmen yesterday, prompting calls from civil rights activists for her to work with other Native nations in Oklahoma to grant full citizenship rights to descendants of people enslaved by the tribes.

The Interior Department’s signoff on the Cherokee Nation’s constitutional changes came after a lengthy legal fight by the tribe’s Black Freedmen to gain equal rights.

Haaland applauded the Cherokee Nation for fulfilling its obligations to Freedmen in a statement.

"Today’s actions demonstrate that Tribal self-governance is the best path forward to resolving internal Tribal conflicts. We encourage other tribes to take similar steps to meet their moral and legal obligations to the Freedmen," said Haaland, the first Native American to lead the Interior Department.

But considering the Cherokee constitution was changed only after a successful lawsuit, some activists said Haaland and her agency should take a more prominent role in the fight over recognition.

Treaties between the United States and the Cherokee, Chickasaw, Muscogee Creek, Seminole and Choctaw nations stipulate that Freedmen should enjoy the same rights within tribes as Native citizens (Greenwire, Feb. 19).

But over the years, the five Oklahoma tribes have marginalized Black people whose ancestors were enslaved by the tribes. In 2007, Cherokee Nation voters approved a constitutional change that said membership should exclude Freedmen and be reserved for Cherokees "by blood."

Marilyn Vann, a Cherokee Freedmen descendant, sued in federal court to try to compel the tribe to reinstate Black Cherokees.

The U.S. District Court for the District of Columbia ruled that the treaty gives Cherokee Freedmen citizenship rights, a decision later upheld by the Cherokee Nation Supreme Court.

"I’m very pleased that there is now a constitution that does not contain discriminatory language," Vann said in a phone interview. "I applaud the secretary for signing it, and I applaud Chief Hoskin as well as former Chief [Bill John] Baker for their actions in upholding the 1866 treaty."

But Vann pushed back against Haaland’s statement that Freedmen’s rights are an "internal Tribal conflict." As a signatory of the 1866 treaties, the United States government has a legal obligation to enforce them, she said, comparing the issue to Jim Crow laws.

"Just as in Alabama and Mississippi, there were governors who didn’t want to give Black people equal protection under the law until the federal government got involved," said Vann, who is campaigning for a seat on the Cherokee Tribal Council.

Freedmen say they are discriminated against by other Oklahoma tribes. The Associated Press recently reported that Seminole Freedmen have been denied COVID-19 vaccinations due to their status in the tribe.

"My hope as a Creek is that my tribe will be able to resolve this ourselves without the federal government being involved. The unfortunate thing, though, is my tribe won’t do it," he said in a phone interview.

It’s rare for Native nations to have treaties that describe citizenship eligibility. Many tribes consider blood lineage a core part of tribal identity and self-determination. Earlier this year, a spokesperson for the Creek Nation told E&E News that Freedmen rights "is a challenging issue, with implications that cut to the core of self-determination and will require a thoughtful conversation among our citizenry."

Grayson noted that American Indian blood wasn’t required for slavery, and it shouldn’t be required for Freedmen descendants to be Creek citizens. He hopes Haaland’s statement leads to change in the Choctaw, Chickasaw, Creek and Seminole nations.

"I hope that’s a signal to the other four tribes that the Interior Department is willing to work with these tribal governments on positive things they can do to be more inclusive," he said.