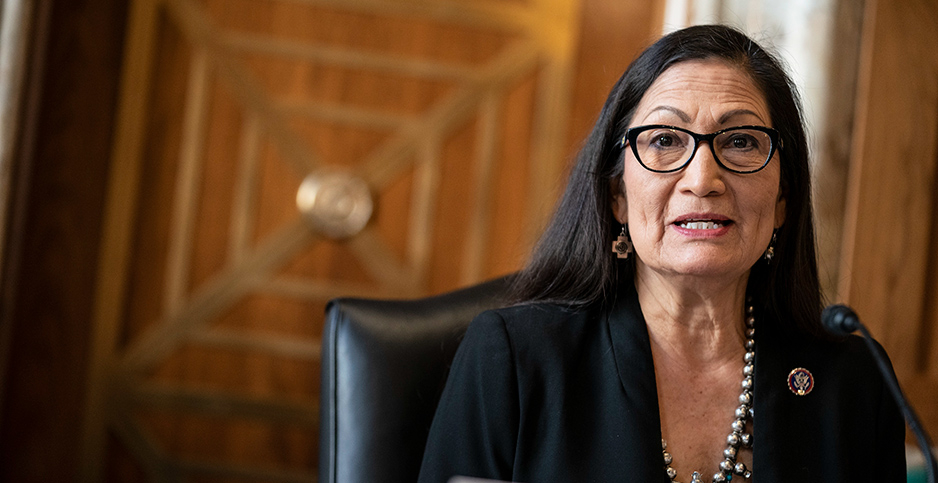 Pressed by GOP lawmakers about her previously articulated energy and environmental positions, Haaland frequently cited the countervailing obligations and limits that would be imposed by a Cabinet secretary position.

"I will tend to support President Biden’s positions, and if I am confirmed as secretary, it is his agenda that I would seek to move forward," Haaland repeated today.

Conservative Republican Sen. Jim Risch of Idaho insisted, for instance, on knowing whether she, personally, supported closing down the Keystone XL pipeline.

Yesterday, likewise, when asked about her past opposition to fracking, Haaland stressed that, if confirmed, "it is President Biden’s agenda, not my own agenda, that I would pursue" Greenwire, Jan. 21).

By and large, both days left an impression that Haaland had held on to the votes she needs for confirmation. Perhaps tellingly, Risch prefaced a series of very pointed questions with the phrase "when you’re confirmed" E&E Daily, Feb. 24).

Haaland would be the first Native American secretary of the Interior Department.

Tactically, Haaland fended off questions with any one of several common nomination-hearing moves.

One, for instance, came in response to a question from Sen. Mark Kelly (D-Ariz.) about whether she supports a permanent ban on uranium mining outside the Grand Canyon National Park.

"Senator, I look forward to, again, discussing this issue with you," Haaland said.

Another common refrain when asked to defend past positions and statements was to stress her understanding that as Interior secretary her job and focus will change.

"I want to first assure you that if I’m confirmed a secretary, that is a far different role than it is for a congresswoman representing one small district in my state," Haaland told Sen. James Lankford (R-Okla.) yesterday. "So I understand that role is to serve all Americans, not just my one district in New Mexico."

Murkowski asked Haaland to answer for past opposition to the Willow project, a large oil and gas discovery west of the Arctic National Wildlife Refuge on Alaska’s North Slope.

The Trump administration last year greenlighted the development, which lies within the National Petroleum Reserve-Alaska, at the same time greatly increasing drilling access across the reserve and reducing long-standing restrictions.

Haaland was among several Democrats who opposed the project, citing the sensitivity of caribou and avian habitats and echoing concerns of Native Alaska leaders in Nuiqsut, a 400-person village that has pushed back against the rapid growth of federal oil and gas development.

The project has since been tabled by developer ConocoPhillips for a season due to environmental litigation that delayed its winter preparation. The company said the delay affected more than 100 jobs.

Murkowski said she was less concerned with why Haaland had opposed Willow in the past than she was about how Haaland may act when she has secretarial authority over the development.

"If we can’t produce oil resources within the National Petroleum Reserve, it causes one to question: Where?" Murkowski asked.

Haaland would not commit to anything specific about the project. She reiterated her position that her secretarial responsibility would differ from her role in Congress.

"I understand how important your state is to you," Haaland said, committing to work with Murkowski, Alaska Native corporations and Alaska Natives on the issue.

She added: "And of course I will follow the law."

At other times, Haaland recited generalities.

"You co-sponsored legislation that provided federal protections for the grizzly bear in perpetuity forever," Sen. Steve Daines (R-Mont.) reminded her yesterday. "Why would you sponsor a bill like that?"

"I imagine at the time, I was caring about the bears," Haaland said.

All told, Haaland co-sponsored 935 House bills, and authored 51 of her own, last Congress. Both numbers exceeded the congressional average, and, at least symbolically, set out her position on myriad issues.

Today, Manchin told Haaland she had done "a good job" at the hearing.

The follow-up hearing, with some senators appearing remotely, lasted more than two hours and did not significantly touch on big parts of Interior’s turf, including the National Park Service, the Bureau of Reclamation and the U.S. Geological Survey.

During the second set of questions, some senators returned to topics they had previously pressed Haaland on, such as Republican Sen. Mike Lee of Utah questioning her about the status of national monuments in his state.

Biden has already ordered Interior to conduct a 60-day review of the monuments’ "boundaries and conditions" and to consider whether to restore them to their sizes before Trump took office.

"I am ready to sit down to talk with you and the stakeholders in Utah," Haaland told Lee today.

A 60-year-old member of the Laguna Pueblo tribe in New Mexico, Haaland pledged during her two days of hearings to improve the federal government’s relations with the country’s 574 recognized tribes and villages.

If confirmed, Haaland will need to decide whether to maintain the Trump administration’s controversial relocation of the Bureau of Land Management’s headquarters to Grand Junction, Colo. Her fellow Democrat, Colorado Sen. John Hickenlooper, is already lobbying her not to return the headquarters to Washington.

Haaland had previously criticized the move. In questioning, Daines, who supported the move out West, noted that last year, she said the relocation was an attempt by the Interior Department to "dismantle" BLM by forcing out senior staffers.

"Why do you believe that moving the BLM headquarters to Grand Junction was so wrong?" Daines asked.

Haaland responded that her previous opposition stemmed from criticism by American Indian tribes that were concerned about the headquarters shift. She also noted that many career staff members left BLM after they were required to move.

BLM last month released data showing the agency lost 287 employees, or 87% of the 328 positions reassigned by the Trump administration to Grand Junction and other bureau offices in the West (E&E News PM, Jan. 28).

As for what to do now, Haaland said she has not made up her mind about whether to move it back, saying one priority will be considering the "well-being" of the career staff in Grand Junction.

"I don’t have any intention at this moment of changing things, but I am not there yet," Haaland said. "If I’m confirmed, that will be an important issue to look at."