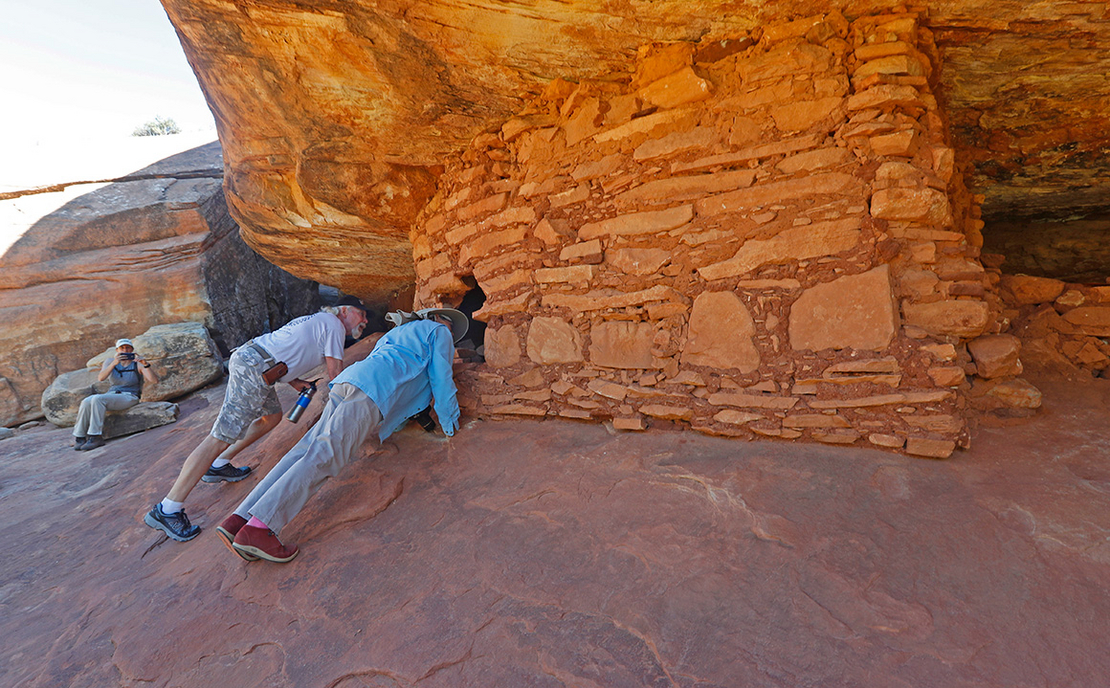 Two people are pictured in 2017 looking inside an ancient granary, part of the ruins in the South Fork of Mule Canyon in Bears Ears National Monument outside Blanding, Utah. George Frey/Getty Images

Interior Secretary Deb Haaland this week said she expects President Biden to restore national monument status to more than 2 million acres of public lands in Utah, even as she acknowledged that a timeline to do so remains uncertain.

Haaland also dismissed concerns over the White House’s continued inaction on both the Bears Ears and Grand Staircase-Escalante national monuments.

"I have no doubt that President Biden cares deeply about this issue," Haaland said yesterday during a telephone interview with reporters, when asked about the status of recommendations she submitted to the White House in early June.

During his presidential campaign, Biden vowed to reverse former President Trump’s 2017 reductions to the Utah monuments, and once in office, Biden ordered the Interior Department to review those changes.

Haaland submitted that report, which hasn’t been publicly released, following her visit to both monuments (Greenwire, June 15). A source told E&E News the report recommended that the president use his executive authority to restore the monuments.

"I know there’s a lot of folks who are anxious," Haaland continued. "I also know there is a tremendous amount going on right now. … I have every confidence that President Biden will do what he promises."

Although Biden touted the "beautiful and majestic" federal estate today in a proclamation declaring tomorrow National Public Lands Day — an annual event that dates to 1994 — he did not mention the Utah monuments specifically.

Environmentalists and Native American tribes have expressed frustration with the administration’s continued inaction, warning that the excised lands are under threat from a host of potential activities, including uranium mining and off-road vehicle use, until those protections are restored (Greenwire, Sept. 9).

“The secretary’s confidence is encouraging — and we, along with millions of people around the country, stand ready to celebrate when Biden makes good on those promises so we can put the era of Trump monument rollbacks where it belongs — in the dustbin of history," Sewell said.

When Trump shrank those sites, he cut away about 85 percent of the original Bears Ears footprint, reducing it from 1.35 million acres to about 202,000 acres. He likewise reduced the Grand Staircase-Escalante monument to about half of its former 1.9-million-acre footprint.

But while Biden is widely expected to use his executive authority under the Antiquities Act of 1906 — which allows presidents to set aside public lands as monuments to protect areas of cultural, historic or scientific interest — Utah’s congressional delegation has pressed for time to construct a legislative solution.

A spokesperson for Utah Rep. John Curtis (R), whose district includes the Bears Ears monument, told E&E News that the White House has yet to respond to the delegation’s request for a meeting with Biden.

"We hope that we can work with the White House and DOI to come to a long-term solution on this matter," said spokesperson Adam Cloch, who noted that Curtis did meet with Haaland during her visit to Utah earlier this year.

He added in response to Haaland’s remarks: "The authority to adjust national monuments solely rests with President Biden, and we hope he will work with us in good faith and respond to our meeting request before making any decision."

But following a visit to the Bears Ears monument on Wednesday, Utah Lt. Gov. Deidre Henderson (R) told a Utah television station that she believes a decision could come in the near future.

"We’ve heard rumblings, but we haven’t heard anything official yet," Henderson told Salt Lake City Fox affiliate KSTU. "I’m not sure when that will happen, but I think it’s imminent."

"We were hoping for Congress to help us figure this out instead of using the Antiquities Act," Henderson said. "I think there will have to be some legal action. We have to have a seat at the table. We care about these lands, but we absolutely need to have a say in how they’re managed."