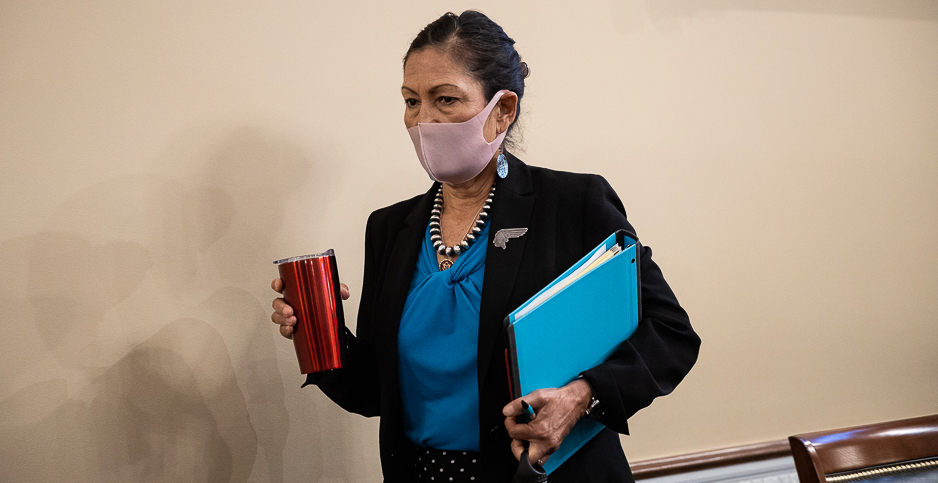 Rep. Deb Haaland has withdrawn from the race to serve as vice chairwoman of the House Democratic Caucus — a setback for her ambitions to climb the ranks of party leadership while a progressive grassroots army continues to call for her appointment as Interior secretary in the incoming Biden administration.

It’s unclear why the New Mexico Democrat — fresh from reelection to a second term in office after her 2018 victory as one of the first two Native American women to come to Congress — decided not to compete in House Democratic leadership elections Thursday (E&E Daily, Nov. 16).

In a Saturday interview with E&E News, Haaland insisted she was continuing to campaign for the position, which she had been working on since the summer.

"I think it’s going really well," she said of her engagement with colleagues. "I’m excited about it, and I think that the Democratic Caucus — we still have one of the most diverse caucuses in history, and we’re in a good position to lead on the issues that impact every single American family, and I know those struggles … I feel good about my race."

By Sunday, however, Haaland had sent a letter to colleagues saying she was bowing out of the leadership contest.

"Our country is at a critical moment, and I believe we can best confront the challenges in front of us at the start of the 117th Congress as a united caucus," Haaland wrote in the letter, obtained by E&E News. "As such, I have decided to withdraw my name from consideration for Caucus Vice Chair."

Congressional sources said Haaland might have stepped aside because she determined there was no path forward to victory.

She would be going up against Rep. Pete Aguilar (D-Calif.), whose unsuccessful bid for the No. 6 House Democratic leadership slot two years ago has him poised to be the front-runner this time around. Rep. Robin Kelly (D-Ill.) is also vying for the position.

Asked for more context about the thinking behind her decision, Haaland’s press office provided a general statement.

"We have an opportunity to unify our Caucus, plan for the future, and support working families while we’re facing the challenges that have come from an Administration who didn’t take this pandemic seriously," Haaland said in the statement.

"I’ve deeply appreciated this process — discussing priorities, getting to better know my colleagues, and their districts and issues, and also answering questions about Indian Country," she said. "I look forward to continuing these conversations with a united caucus, laser-focused on healing and rebuilding our country."

Haaland was pitching herself to be the first Indigenous member of House Democratic leadership. And, as a member of President-elect Joe Biden’s Climate Engagement Advisory Council and the chairwoman of the Natural Resources Subcommittee on National Parks, Forests and Public Lands, she was positioned to be a leading voice on environmental issues.

House Speaker Nancy Pelosi (D-Calif.) has said climate legislation would be a top legislative priority early in the next Congress (E&E Daily, Oct. 6).

Haaland has a reputation as a strong fundraiser for the Democratic Congressional Campaign Committee and the respect of high-profile Democrats, including House Natural Resources Chairman Raúl Grijalva (D-Ariz.), who yesterday said he wanted to see Haaland be the next secretary of the Interior.

"As her colleague on the Natural Resources Committee, I have seen first-hand the passion and dedication she puts into these issues at the forefront of the Interior Department from tackling the epidemic of missing and murdered Indigenous women to crafting thoughtful solutions to combatting the climate crisis using America’s public lands," he wrote in a letter to members of the Congressional Hispanic Caucus, which had put Grijalva’s own name forward as possible contenders for the post.

"It is well past time that an Indigenous person brings history full circle at the Department of Interior," Grijalva said. "It should go without saying, Rep. Haaland is absolutely qualified to do the job."

Haaland has for months been on the short list to be Biden’s Interior secretary. She would be the first Native American to oversee the agency that advocates for tribal populations.

Over the weekend, she said the rumors of her possible appointment have no bearing on her leadership campaign.

"Look, I don’t have a say over that," Haaland said. "I’m not basing my future on that possibility. That’s something that’s a ways off.

"Regardless of where I am," she continued, "I’m going to do everything I can to make sure the Biden-Harris administration is successful, and I’ve been working on this [leadership] election since the summer, and I’m going to continue to work on that until we have elections on Thursday."

Asked if she would accept an administration position if she won her leadership race, Haaland replied, "I can’t even think about that at the moment, quite frankly. I’m just not even there."

But Haaland has previously stated she would never close the door to the opportunity. And, with Biden’s electoral victory, the calls have only grown louder for him to move the congresswoman’s resume to the top of the stack.

Justice Democrats and the Sunrise Movement, two of the most aggressively vocal progressive forces in the 2020 campaign cycle, last week rolled out their dream Cabinet for the incoming Biden administration, listing Haaland as their top choice for Interior (Greenwire, Nov. 11).

Another contingent of progressive organizations presented a public list of candidates it would like to see fill any of the thousands of jobs in the new administration. Haaland is featured in that list (Greenwire, Nov. 16).

A coalition of Native American organizations affiliated with the Indigenous Environmental Network became one of the latest groups to join the fray in calling on Biden to appoint Haaland to lead Interior, arguing that she has the personal sensitivity, professional experience and ideological purity to be a forceful advocate at the Cabinet level.

"Our belief is that Representative Haaland will help facilitate the Biden/Harris vision for dealing with climate change, addressing the COVID-19 pandemic in Indian Country, ensuring an effective economic just recovery plan for Tribes and communities, overseeing the protection of public lands and fulfilling all treaty and statutory obligations," said the coalition in its Nov. 14 letter to Biden.

Dallas Goldtooth, the "keep it in the ground" organizer for the Indigenous Environmental Network, told E&E News yesterday that he remained hopeful Haaland would be tapped for the position.

He said he felt no disappointment with her decision to step away from the leadership race, explaining he would rather see her lead on policy than try to work within a Democratic Party apparatus that has frequently disappointed the Native American community.

Goldtooth also spoke to increasing anxiety about whether House Democrats can afford to lose any of their members with their majority substantially narrowed after the 2020 elections, which some say should necessitate Biden go elsewhere to fill out his team.

"From what I understand, her team has already talked about what happens — if she gets this — to her seat in New Mexico, her seat in the House, and what impacts that could have, and they’ve definitely weighed the options," he said.

Ultimately, Goldtooth continued, Haaland should not turn down the nomination if it is offered.

With partisan gridlock on Capitol Hill likely for the foreseeable future, "an agenda to adequately address climate change is most likely going to hit a hard wall," said Goldtooth.

"We really do need to see some decisive and strong action from the Biden White House. That’s why I think it’s great to have solid allies in these key positions of power within the administration who could take some decisive action."

He added, "We cannot ignore the growing momentum from across the board of people who are in support of Haaland’s nomination for secretary of the Interior."