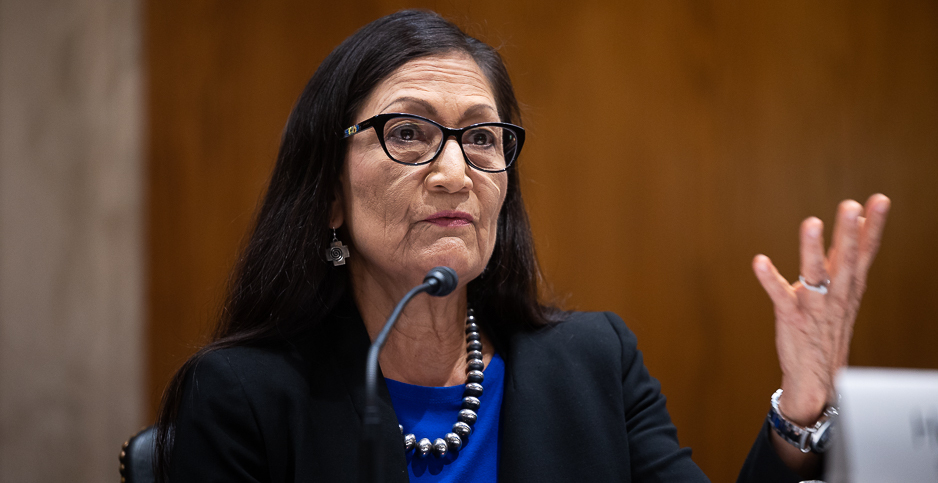 Interior Secretary Deb Haaland today appeared to concede that a second Arctic National Wildlife Refuge oil and gas lease sale will be offered by the year 2024.

Appearing before the Senate Interior and Environment Appropriations Subcommittee, Haaland was put on the spot by Republican Sen. Lisa Murkowski of Alaska.

"Do you believe that you are required by current law to hold a lease sale in the 1002 area of ANWR by 2024?" Murkowski asked.

"I appreciate that, because I don’t think that there’s any ambiguity in the language," Murkowski responded.

A 2017 law states that Interior "shall offer a second lease sale under the oil and gas program … not later than seven years after the date of the enactment."

On June 1, the Biden administration announced plans to suspend all ANWR oil and gas drilling leases that were sold in the Trump administration, pending an environmental analysis by the Interior Department.

Haaland alleged in that order that there were legal deficiencies undergirding the leases sold by the Trump administration shortly before President Biden took office, such as insufficient environmental reviews. She also argued that the previous administration had misinterpreted the law in its final approval of the ANWR leasing program.

That lease suspension follows through on an executive order Biden signed to temporarily freeze all oil and gas activity in the refuge’s coastal plain.

Haaland appeared before the panel to defend the Biden administration’s fiscal 2022 budget request of about $17.4 billion for her department, but she got drawn into other issues, as well, including the controversy surrounding the nominee to head the Bureau of Land Management, Tracy Stone-Manning (Greenwire, May 28).

Democratic Sen. Jon Tester of Montana denounced recent negative reports about the nominee as a "lot of crap [that] is not correct," and asked Haaland to "put your full support behind her." Stone-Manning, a Montana resident, worked for Tester, as well as for Democratic former Montana Gov. Steve Bullock.

"This lady knows her stuff and would be an incredible asset to this nation," Tester said.

"We’re supportive of all of President Biden’s nominees," Haaland said.

The American Accountability Foundation, a research group founded by two longtime GOP operatives, has questioned a large personal loan that Stone-Manning received from a Montana developer in 2008, when she was working for Tester. The group said it raises "serious questions" about whether the loan was an "impermissible gift" from a political donor (E&E Daily, June 15).

Haaland also faced questions about the Interior Department’s moratorium of new oil and gas leases, which was temporarily blocked yesterday by a Louisiana federal judge. Responding to a question from Republican Sen. Cindy Hyde-Smith of Mississippi, Haaland said the department is "reviewing" the ruling that orders new oil and gas leasing to restart in public lands and waters.

Judge Terry Doughty’s decision out of the U.S. District Court for the Western District of Louisiana reverses a pause until the court decides on the substance of the arguments in the case.

"It’s a fresh decision that we all found out about at the same time last night," Haaland said.

Haaland and Rachael Taylor, Interior’s principal deputy assistant secretary of policy, management and budget, both noted during the hearing that the judge’s ruling was issued as the Biden administration is getting ready to release its interim review of the oil and gas program. That review, which Biden ordered so the department could consider the climate impacts of oil and gas drilling on public lands and waters, had been promised to be released early this summer, they noted.

Tester pressed Haaland on that effort, saying the review needed to be made public soon.

"As this review rolls on, a leasing pause gives folks working in the oil and gas industry a lot of uncertainty. It is getting harder and harder to extend that trust without the hard information in the review," he said.

Haaland noted that she believed it would be made available "sometime in the near future."

Tester responded, "I’m taking that it will be out in the next month, OK?"