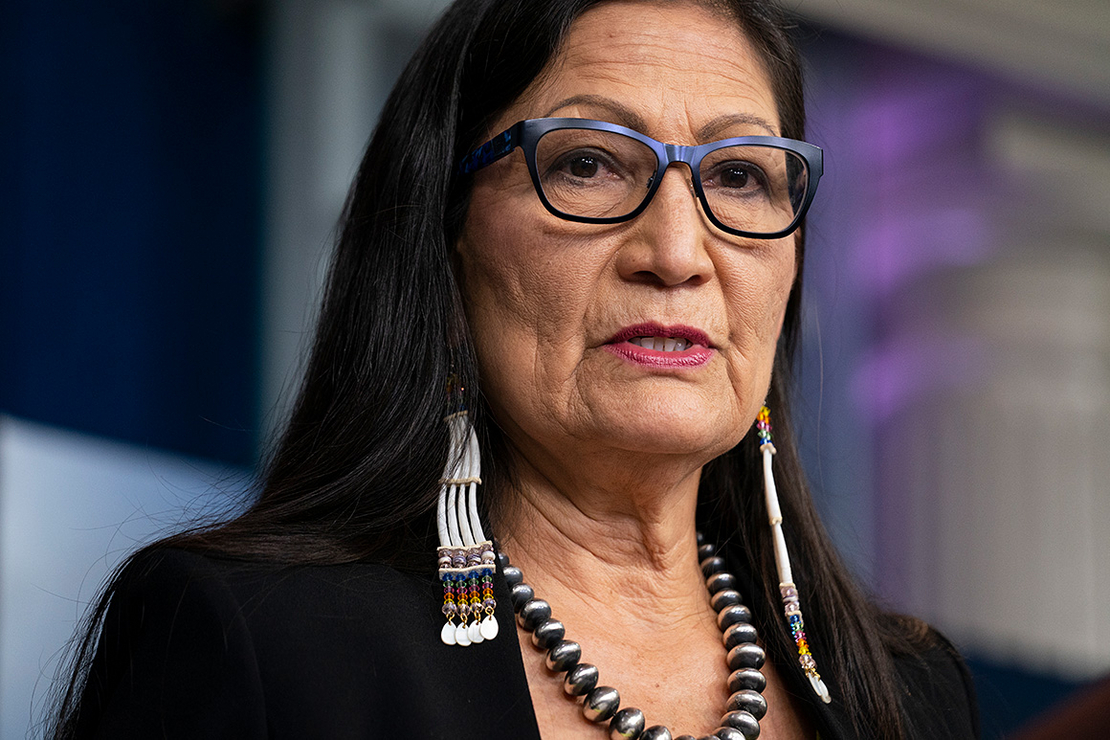 In an April file photo, Interior Secretary Deb Haaland speaks during a press briefing at the White House in Washington. Haaland and other Interior Department officials are in Glasgow, Scotland, for the COP 26 summit. Evan Vucci/AP Photo

While environmentalists clamored outside for more aggressive action, Haaland used her kick-off appearance inside the 26th United Nations Climate Change Conference of the Parties (COP 26) to promote U.S. commitments to wind energy and resource protection.

“This goal is important to us,” Haaland told reporters this afternoon. “I don’t know what else to say other than the fact that it’s a priority. and we’ll just make sure that it gets done.”

Haaland was joined by representatives of the Kingdom of Denmark, the International Renewable Energy Agency (IRENA) and other international colleagues to showcase wind energy efforts.

Haaland also addressed an as-yet-released Biden administration review of the federal oil and gas leasing program, although she provided no additional details about when that document would be publicly accessible.

Administration officials had promised to release an interim report on its leasing program by this summer. Interior "paused" oil and gas leasing during its initial review, before a federal judge this summer ordered the program to restart (E&E News PM, Oct. 29)

"We are making a lot of changes now. Even without the report, we know what needs to happen," Haaland said. "We are doing whatever we can at the department to ensure we are analyzing these leases with climate change as a backdrop. We need to absolutely consider climate change, we need to consider the social cost of carbon in the things that we do."

Laura Daniel-Davis, principal deputy assistant Interior secretary for land and minerals, added the existing program falls short in "providing an adequate return for the taxpayer" or accounting for the impacts of climate change.

"We’ve also seen in some of our review, limited public input opportunities and transparency in some cases," she said.

Setting the stage yesterday, Haaland visited several sites related to offshore wind in Aberdeen, Scotland, where she met with government, industry and organization representatives from the United Kingdom. She also visited the Kincardine Offshore Floating Wind Farm, the largest of its kind, as well as the European Offshore Wind Deployment Centre.

Conservationists from the U.S. Gulf Coast associated with the Build Back Fossil Free campaign, meanwhile, gathered ahead of Haaland’s public remarks today to protest the Biden administration’s plans to hold a major offshore oil and gas lease sale in the Gulf of Mexico.

Also tomorrow, Assistant Interior Secretary for Fish and Wildlife and Parks Shannon Estenoz and Daniel-Davis will join U.K. leaders to announce a joint statement “reflecting commitments and actions to address the dual crises of climate change and biodiversity loss.”

“These public lands represent a significant opportunity to address the intersecting crises of climate change and the loss of nature and biodiversity, including our responsibility to secure a sustainable future for endangered species,” Estenoz told reporters today.

“The United States,” Haaland told reporters, “is back at the table.”