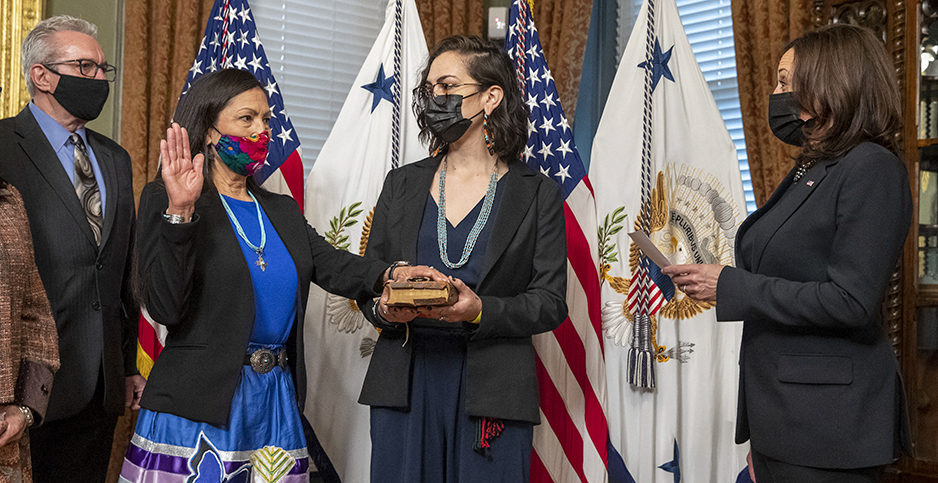 The several-minute ceremony at the ornate Eisenhower Executive Office Building, next to the White House, ended with a mask-wearing Harris offering brief, but heartfelt, remarks following Haaland’s line-by-line recitation of the oath.

"History is being made yet again," Harris enthused.

Haaland said, "Thank you," the group posed for pictures, and then Harris said, "OK!" They left without taking questions.

Haaland’s daughter Somáh provided video of the event on Instagram, and pool reporters were present in the ceremonial room with sea-green walls adorned with floral designs, mystical beasts, and intricate patterns in red, blue and gilt paint.

The billboard will be parked outside of the Interior Department throughout the day.

"Secretary Haaland will be a fierce advocate for clean air and water, for our land and for its relatives," Pitre said.

Yesterday, she held a virtual all-staff forum attended by more than 15,000 agency employees where she highlighted the work of team members in each of the bureaus and offices.

She joined virtual meetings with more than a dozen tribes and tribal-led organizations and more than 40 groups focused on environmental justice, where Interior said she "discussed the administration’s commitment to advancing an inclusive and equitable climate and conservation agenda."

Haaland also delivered remarks at a virtual Tribal Ocean Summit hosted by the Bureau of Ocean Energy Management, and she received a briefing from Interior’s ethics office.

Haaland sat down virtually for her first interview as Interior secretary with 10 reporters from the Native American Journalists Association.