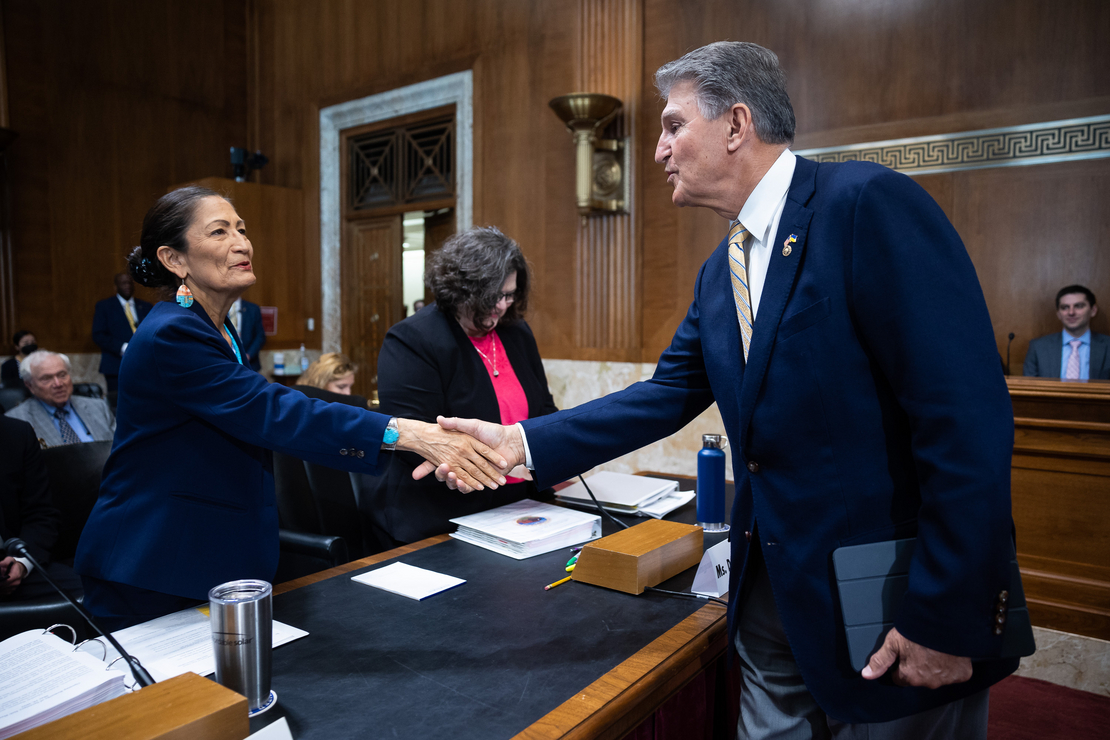 Despite delays in planning, Interior Secretary Deb Haaland today said the Biden administration will release a proposed five-year plan on offshore energy leases by the end of June.

Testifying before the Senate Energy and Natural Resources Committee this morning, Haaland said the department will meet the June 30 deadline, but she declined to say whether it will authorize any new drilling or development.

“We take this responsibility seriously without any prejudgment of the outcome,” Haaland said.

The release of a draft five-year plan has increasingly captured the attention of some lawmakers, already at odds with the Biden administration over its handling of the federal oil and gas program.

The conflict has intensified in the wake of Russia’s war against Ukraine and escalating gas prices, with Republicans accusing the White House of holding back production on public lands and the administration’s putting the blame on oil companies for not using their existing leases and permits.

Haaland said work on the new five-year plan was delayed by the Trump administration.

“The previous administration had stopped work in 2018 on a new five-year plan, so there has been a lot to do to catch up on this,” Haaland said. “Varying conflicting litigation has also been a factor.”

Haaland said release of the plan will be followed by a period for public comment, but she told senators that no specific deadline had been set for final approval of a plan that would allow any new leasing to begin.

“I mean, I don’t think there is an actual deadline,” Haaland said.

Oklahoma Republican Sen. James Lankford said an extended debate could lengthen the process by another two to three years before anything gets decided.

“That’s the concern actually that all of us have, is that there’s actually no deadline,” Lankford told Haaland.

Haaland told lawmakers the department planned to release the plan next month after Sen. Joe Manchin (D-W.Va.), the committee’s chair, said there’s “no reason to believe” that the new plan will be completed by this summer or that it will allow any new lease sales at all.

“Unfortunately, even as we see Russia wage a war enabled by energy insecurity in Europe, this administration has made its opposition to domestic oil and gas production crystal clear — on and off federal lands and waters,” Manchin told Haaland.

Energy issues dominated the hearing this morning as Haaland pitched an $18.1 billion budget plan for the Interior Department for fiscal 2023.

Haaland said the proposed budget would boost the department’s spending by 12 percent from 2022 levels and that it showed the Biden administration’s commitment “to deliver jobs and economic growth.”

But her promise of an offshore plan in the works did little to mollify several lawmakers.

The offshore oil and gas leasing plan has landed in the center of a debate over Interior oil and gas decisions. Republicans and oil industry supporters are increasingly wary of the pending plan, expecting the administration to make good on their climate priorities and greatly reduce the practice of leasing.

Those fears were reinforced when the administration announced earlier this month that it would cancel the final lease sales in the existing program, citing industry disinterest and litigation delays.

Haaland this morning dodged multiple questions from Manchin on whether the new program would offer new lease sales.

“Our intent is to follow the law,” she said. “This five-year plan is in the works, right now. I couldn’t tell you what is in it.”

The secretary’s announcement quickly rippled outside the hearing.

In a statement, Erik Milito, president of the National Ocean Industries Association, accused the administration of “intentional obstruction and delays.”

Alex Taurel, conservation program director for the League of Conservation Voters, said he applauded Haaland for taking “a deliberative and thoughtful approach” to the new five-year plan.

“Since leasing decisions won’t produce oil for years or decades, they have no impact on today’s gas prices,” he said. “But new leases will keep us dependent on oil years or decades from now when our transition to cleaner energy sources must be far along so we meet our obligation to solve climate change and deliver pollution reductions to communities fighting for environmental justice.”

“What remains to be seen is whether the location and frequency of lease sales in the proposed program will help us break our dependency on oil and gas extraction or lock us into further reliance on fossil fuels even as the climate crisis worsens,” he said in a statement.

Manchin unleashed on the secretary regarding general management of the oil program, laying out a list of complaints and arguing that Haaland’s team had failed to take steps that would encourage more production at a time when gas prices are high.

The West Virginia senator said his frustration was at “an all time high” as he witnessed the administration turning to countries like Venezuela or Iran to potentially fill the oil deficit created by the recent ban on Russian oil — a wartime measure to cut off Russia’s oil and gas revenue in retaliation for its war against Ukraine.

He said “commonsense” changes could be implemented by the Biden administration to force oil producers to utilize the permits and leases they have in hand — such as implementing escalating rental fees that would encourage use.

While federal leases shouldn’t be a “bargain basement” deal compared to drilling state and private land, Manchin said Interior needed to streamline permitting and access so that the cost of doing business on federal lands is worth it to operators.

The Biden administration’s management of the oil and gas program has been fraught since day one, coming on the heels of a campaign promise to end new leasing and permitting on public lands. Biden froze new leasing shortly after taking office, but that action was reversed by a federal judge.

The rollout of new auctions, however, has been delayed. The one offshore oil sale that the administration conducted last November was vacated by a federal judge due to its faulted climate accounting.

The first suite of onshore oil lease sales is scheduled for next month, but industry has slammed their narrow offerings. Interior’s Bureau of Land Management cut roughly 80 percent of the lands proposed for leasing by industry.

An industry group in Wyoming filed a protest over the reduced acreage yesterday, arguing that Interior failed to make a case for why it was deferring proposed parcels.

On the other side of the issue, climate and environmental groups protested the suite of sales, as well. Their argument: The administration has authority to not lease new oil and gas at all, on account of the resulting damage to the climate.

“Tens of thousands of people have spoken up against drilling on public lands. And now it’s up to the BLM to listen and put an end to leasing once and for all,” said Dan Ritzman, lands, water and wildlife director at the Sierra Club, in a statement.

Haaland addressed this reduction, saying that there is a “science” to leasing, such as offering areas that are already near existing development.

But Barrasso took issue with that claim, noting that oil and gas producers in Wyoming are saying the oil leases up for sale next month are far from infrastructure, characterized as isolated tracts that have low potential for actual oil development.

“It’s my job to manage and conserve all of our public lands for every single American,” she said. “Considering the climate crisis that we’re in. We felt that implementing several reforms such as issuing leases where current infrastructure exists, for example, would move our country forward with respect to making sure we’re conserving the land and also doing our jobs to produce energy.”