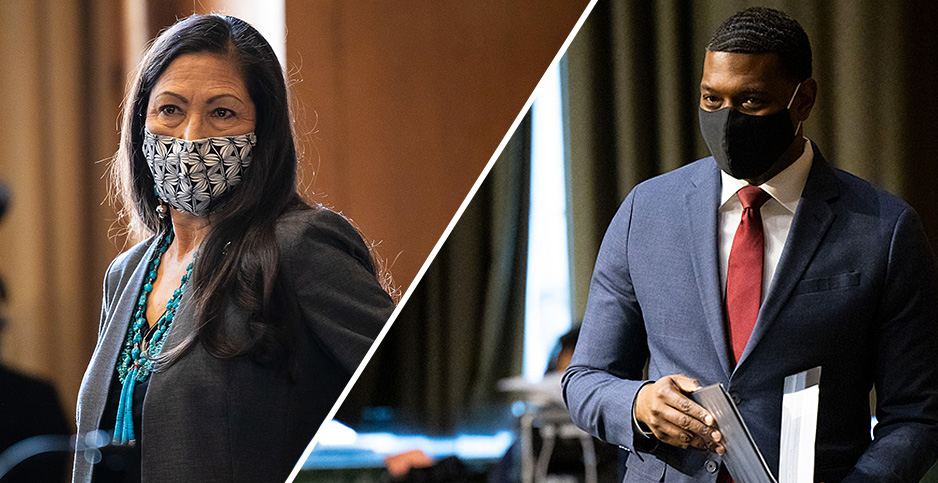 Two of the top environmental enforcers in President Biden’s Cabinet will make their first Capitol Hill appearances since being confirmed last month.

Interior Secretary Deb Haaland, until March a New Mexico Democratic lawmaker, will return — if virtually — to her old stomping grounds tomorrow to testify on her agency’s fiscal 2022 budget request before the House Interior-Environment Appropriations Subcommittee.

Regan will field questions Wednesday from lawmakers on the House Interior-Environment Subcommittee about his agency’s budget submission.

Haaland will be accompanied by Rachael Taylor, Interior’s principal deputy assistant secretary of policy, management and budget. Regan, at his hearing before House appropriators Wednesday, will be joined by EPA Deputy Chief Financial Officer David Bloom.

These hearings come following the White House’s submission, earlier this month, of broad-strokes budget requests for both agencies that would boost overall spending from baselines set in the previous four years under the Trump administration.

In those requests, Interior would receive $17.4 billion — 16.3% above the department’s fiscal 2021 enacted funding level — while EPA would get $11.2 billion — an increase of 21% from the agency’s current allocation (Greenwire, April 9).

Meanwhile, the president and members of his Cabinet are also looking to sell lawmakers on a $2 trillion infrastructure overhaul that includes investments in climate change and natural resources. Regan will play a major role in these discussions (E&E Daily, March 31).

In the two hearings before the House Interior-Environment Appropriations Subcommittee, Haaland and Regan will take questions from an 11-member panel representing the more mainstream voices in their parties on environmental issues; the lawmakers who sit on the Interior-Environment Appropriations Subcommittee are also known for their pet issues and parochial priorities, making it easy to telegraph some of the exchanges.

For instance, Rep. Betty McCollum (D-Minn.), the former chairwoman of the subcommittee, is likely to want to discuss the new administration’s position whether the Twin Metals copper-nickel project near the Boundary Waters Canoe Area Wilderness should proceed in light of environmental risks.

There will, however, still be plenty of opportunities for conversations to grow contentious.

Democrats and Republicans are largely divided on how aggressive the Biden administration should be in setting new policies and regulations to combat climate change.

Republican subcommittee members could press Haaland to clarify the status of her agency’s review and push her to address concerns about decimating local communities that rely on the fossil fuel industry.

Regan could face questions about potential environmental regulations that Republicans fear will hamstring businesses and economic development, along with GOP skepticism about a multimillion-dollar funding request for a new EPA environmental justice initiative (Greenwire, April 9).

A House Energy and Commerce subcommittee recently convened a 2-½-hour hearing on a litany of environmental justice legislation that laid bare the partisan divide on one of the Biden administration’s biggest priorities (E&E Daily, April 16).

Schedule: The Senate Appropriations hearing is Tuesday, April 20, at 10:30 a.m. 106 Dirksen and via webcast.

Schedule: The Interior hearing is Tuesday, April 20, at 10 a.m. via webcast.