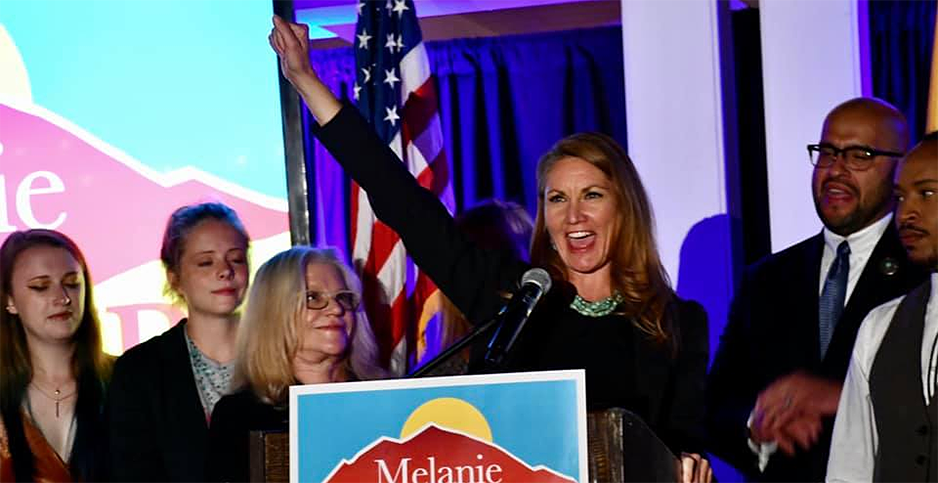 As she prepares to join Congress next week, Melanie Stansbury told E&E News that her experience with the "art and craft" of legislation and the nitty gritty of budgeting will be crucial in achieving her goals around climate change, clean energy transitions, and the continued questions over energy revenue and state budgets.

And when she arrives for her swearing-in on Monday in the House, it will also be a bit of a homecoming.

Stansbury previously worked on the other side of Capitol Hill from 2015 to 2017, as the main Democratic water policy aide on the Senate Energy and Natural Resources Committee under Sen. Maria Cantwell (D-Wash.), the ranking member at the time.

"What was really extraordinary about that experience is I was there under the leadership of two amazing women," she said, referring to both Cantwell and Sen. Lisa Murkowski (R-Alaska), the committee’s chair at the time.

Before that, Stansbury worked on natural resources issues at the White House Council on Environmental Quality and the Office of Management and Budget, where she helped craft executive orders.

She considers herself a pragmatic progressive, emphasizing both her ability to do bipartisan work — like bills she passed in the New Mexico Legislature to improve water data collection and modernize the electric grid — and her dedication to progressive goals, like net-zero greenhouse gas emissions.

"In the short term, the most immediate work ahead of us is really around continuing the work around recovery and hopefully trying to get an infrastructure package at least prepared this summer," she said.

When it comes to infrastructure, she said she will use her Hill and White House experience as a lens on matters like climate resilience, to "make sure that ultimately whatever passes reflects the new paradigm about how climate change is going to impact our infrastructure and our communities."

In the run-up to the election, Stansbury was criticized by her Republican challenger, Mark Moores, who said net-zero emissions would threaten the oil and gas jobs and revenue that New Mexico depends on.

She acknowledges that the transition to clean energy might be tough for communities dependent on fossil fuels for jobs and tax revenue.

"Especially in places like New Mexico and other states where we have economies and state budgets that are very much tied to industries that are undergoing transitions, we have to figure out how to work with those industries, both to ensure that we’re addressing the carbon footprint of those industries and diversifying our economy," Stansbury said.

Stansbury cites her own family’s connection to the issue: Her mother used to work at the San Juan Generating Station, a coal-fired power plant that’s on track to be completely shut down by next year.

As far as a solution to the matter goes, she argues that the federal government is in the best position to take a major role in helping communities replace fossil fuels.

"We have to invest resources to make that possible," she said. "And that’s one of the major goals that I see the federal government having in this transition, is helping to support communities as they’re reimagining their economic futures."

‘Nuts and bolts’ of budgeting

Her work for Cantwell included numerous provisions of the bipartisan energy and natural resources policy bill the committee worked on for years. Many of the resources parts of the legislation passed into law as part of a 2019 lands bill, while much of the energy-related work went into a bill passed late last year (Energywire, Dec. 23, 2020).

"I learned working on the committee that if you bring the right heart and the right mind to the work, and a dedication to finding common ground, you can really craft amazing bipartisan legislation," Stansbury said. "I really learned the art and craft of bipartisan lawmaking and good evidence-based policymaking."

Stansbury came to Washington in 2010, as an intern at CEQ. The next year, she got a job at OMB as a budget examiner for science programs at the Interior Department, including at the U.S. Geological Survey, where she worked until 2015.

The experiences set her up well both for politics and for her water-focused consulting work, she said.

"Having the opportunity to work on writing executive orders for the president and learning the nuts and bolts of the president’s budget, how everything’s crafted, and then how to translate policy into action through the management and budget of the agencies — you really learn … how government works, what the agencies do and what works," she said.

Stansbury earned the nomination for the 1st District special election in March, beating out seven other candidates. She had the support of the Sierra Club, Climate Hawks Vote, 314 Action and others.

Stansbury’s win in the general election was no surprise; the district is heavily Democratic, and both Haaland and President Biden easily won there last year.

But both Democrats and Republicans saw the race as an early test of their messaging in advance of next year’s midterm elections. The president’s party generally performs badly in the first midterm after an election, so a tight margin would have alarmed Democrats.

"This is the first big test for House Democrats in 2021. We cannot let Republicans flip this seat," Rep. Adam Schiff (D-Calif.) wrote in an email fundraising plea in May.

Moores focused considerable attention on a "defund the police" attack, arguing that Stansbury wanted to hurt law enforcement by depriving it of money and power. Stansbury pushed back and sought to highlight her support for the police.

Stansbury ended up getting 60.3% of the vote to Moores’ 35.7%. That was a wider margin in the district than either Haaland or Biden got.

Outside of the energy sphere, Stansbury said her priorities will include long-term efforts to better deal with drought in the West and to mitigate poverty and hunger, particularly in rural and Native American areas.

"One of the most impactful things I think I can do to fight childhood hunger is to bring more resources home to address some of the systemic issues around hunger," she said, pointing to programs that are administered on the state level but overseen by the federal government as ripe for reform.

She also hopes that her connections with Haaland — who supported her campaign and has been in frequent contact with her — will yield dividends.

"I hope to continue in her footsteps and continue the work she was doing on issues like murdered and missing Indigenous women, and to also bring in some of the other issues that have become increasingly relevant as the seat has been vacated and we’re coming out of the pandemic," she said.