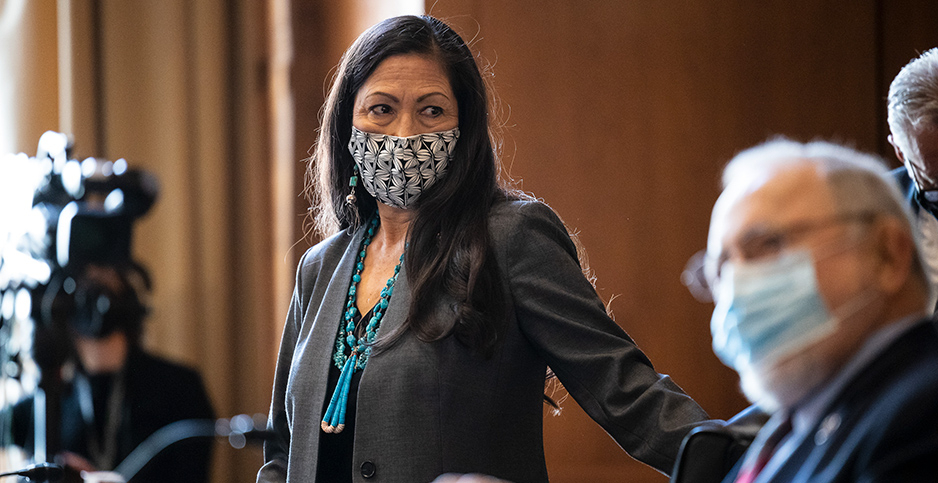 The first Native American nominated to head the enormous department, Haaland introduced herself to the Senate Energy and Natural Resources Committee as an inspirational, up-by-the-bootstraps candidate who seeks bipartisan solutions.

"If an Indigenous woman from humble beginnings can be confirmed as secretary of the Interior, our country holds promise for everyone," Haaland said, adding, "I have pieced together health care for me and my child as a single mom, and at times relied on food stamps to put food on the table."

While the tone remained civil this morning, the hearing will resume for a second round of questions tomorrow, and GOP senators including Sen. Steve Daines of Montana have already made clear their intention to fight Haaland’s nomination over her positions on oil and gas and other energy-related policies (E&E Daily, Feb. 8).

"I am troubled by many of Rep. Haaland’s views that many in my home state of Wyoming would consider as radical," said Sen. John Barrasso, the committee’s ranking Republican.

Barrasso cited Haaland’s past statements about the need to "keep fossil fuels in the ground" and her previous vow to vote against fossil fuel infrastructure.

"Representative Haaland’s positions are squarely at odds with the mission of the Department of Interior; that mission includes managing our nation’s oil, gas, coal resources in a responsible manner," Barrasso said.

Haaland countered that "there’s no question that fossil energy does and will continue to play a major role in America for years to come." Under questioning, Haaland agreed that as a "general matter" she believes Interior should continue to issue energy-related permits.

"I know how important oil and gas revenue are to fund critical services," Haaland said during the hearing, repeatedly emphasizing that a freeze on new oil and gas leases ordered by President Biden doesn’t affect ongoing drilling. "But we must also recognize that the energy industry is innovating, and our climate challenge must be addressed."

When Daines confronted her with some of her other past statements that included her deep-seated opposition to fracking, Haaland stressed that, if confirmed, "it is President Biden’s agenda, not my own agenda, that I would pursue" (Greenwire, Jan. 21).

The panel’s closely watched chair, Democratic Sen. Joe Manchin of West Virginia, did not tip his hand this morning other than to talk up Interior’s crucial role in public lands energy production.

Haaland signaled she would back Manchin’s push to fund abandoned coal mine reclamation and reform hardrock mining laws.

Haaland, who was peppered with questions about losing fossil fuel jobs, said mine reclamation provides an opportunity for job growth.

She and Manchin have supported updating the 1872 General Mining Act to impose a royalty for hardrock mines on public lands, which could help pay for abandoned mine cleanup (Greenwire, Jan. 25).

Haaland noted in her response to Manchin that she’s familiar with the issue because abandoned mines in New Mexico, particularly on the Navajo Nation, have been major sources of water pollution.

"I agree wholeheartedly that we need the resources to make sure that we are protecting the health and safety of our fellow Americans," Haaland said.

The 2 ½-hour hearing, with some senators appearing remotely, began at 9:30 a.m. and did not significantly touch on big parts of Interior’s turf, including the National Park Service, Bureau of Reclamation and U.S. Geological Survey.

In an unusual touch, Haaland’s team brought in Alaska’s staunchly Republican Rep. Don Young for a show of bipartisan support.

Young serves on the House Natural Resources Committee with Haaland, a New Mexico Democrat reelected last November to a second House term by a 58%-42% win, and he sought to reassure Senate Republicans that "she will listen to you."

But Republicans hammered the early decisions of the Biden administration where the two parties appear far apart, such as with national monument designations.

Former President Trump removed protections from more than 85% of the original Bears Ears National Monument in Utah, cutting the 1.35 million-acre site to about 202,000 acres in late 2017. Interior finalized a management plan early last year to open the removed lands to drilling, mining and grazing.

Biden has already ordered Interior to conduct a 60-day review of the monument’s "boundaries and conditions" and to consider whether to restore it and other sites to their status before Trump took office (Greenwire, Feb. 5).

Pressed by Lee, Haaland acknowledged that "yes, it does appear that those things have gone back and forth depending on who’s in office," although she did not detail what might happen next with the national monument review.

A 60-year-old member of the Laguna Pueblo tribe in New Mexico, Haaland pledged to improve the federal government’s relations with the country’s 574 recognized tribes and villages (Greenwire, Feb. 12).

In particular, she stressed her intention to improve tribal broadband access and to address the persistent social problem of missing and slain Indigenous women.

If confirmed, Haaland in her Interior tenure will also be tested by her consideration of reversing the Trump administration’s relocation of the Bureau of Land Management’s headquarters to Grand Junction, Colo.

Her fellow Democrat, Colorado Sen. John Hickenlooper, is already lobbying her not to return the headquarters to Washington (E&E News PM, Feb. 9).

He reiterated that point at today’s hearing.

"I strongly support keeping the BLM headquarters in Grand Junction," he said. "I have had conversations with a number of my Senate colleagues, particularly those representing states with substantial BLM lands. And I’ve seen broad bipartisan support for a headquarters office to remain in the West."

Haaland has been a vocal opponent of the move, noting in the past the loss of senior BLM leaders who chose not to relocate from Washington.

"As you consider this important issue, I’m hoping you’ll commit to keeping an open dialogue and working with us Western senators," Hickenlooper said.

Haaland pledged to do so.

"I’ll look forward to consulting more on this issue with you," Haaland said, "and I understand that we absolutely need to make sure … that we have a full team there at BLM."