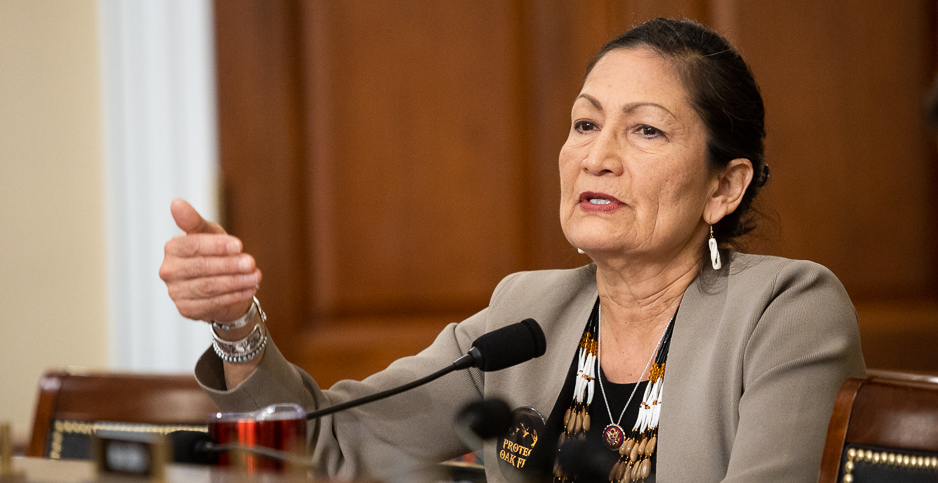 Allies of Rep. Deb Haaland are making themselves known ahead of what is likely to be a contentious confirmation hearing to lead the Interior Department.

Their tactics show their awareness of the steep climb Haaland faces in winning support from Senate Republicans — and their recognition that the previously little-known, one-term congresswoman has in a short time become a political lightening rod in the debate over America’s energy agenda.

Their plans also underscore the resolve of progressives and tribal interests to bolster the nominee who would, if confirmed, be the first Native American to ever serve in a presidential Cabinet, let alone lead a federal agency that has been historically hostile to Indigenous peoples.

Today, the eve of Haaland’s confirmation hearing before the Senate Energy and Natural Resources Committee, a left-leaning government watchdog group will host a press conference call with House Natural Resources Chairman Raúl Grijalva (D-Ariz.) and Rep. Sharice Davids (D-Kan.) — who, with Haaland in 2018, became the second Native American woman ever elected to Congress.

The purpose of this call, said Accountable.US, will be to discuss "the motivations behind Senate Republicans’ opposition of President Joe Biden’s Interior nominee, Congresswoman Deb Haaland, and the historic nature of her confirmation."

At the same time, Accountable.US is rolling out a 10-page report detailing the oil and gas industry’s hold on the 10 Republicans who sit on the Senate Energy and Natural Resources Committee. It is a catalogue of past statements, bills introduced, votes cast and, most important of all, checks cashed, all designed to show how the lawmakers are biased in their opposition to Haaland.

According to the group’s analysis, the Republican committee members cumulatively took over $1.4 million from oil and gas interests between 2019 and 2020. Their combined haul from these interests, over the course of their congressional careers, accounts for nearly $8.8 million.

Of the nearly $70,000 ranking member John Barrasso (R-Wyo.) raked in during the 2020 election cycle, Accountable.US also found that almost $20,000 of that amount came in during the cycle’s final fundraising quarter — all from the industry.

Barrasso, who was expected to be committee chairman before the Jan. 5 runoff elections in Georgia shifted the balance of Senate power to the Democrats, told E&E News two weeks ago he would likely oppose Halaand for supporting Biden’s pause on issuing new oil and gas leases on federal lands and halting construction on the Keystone XL pipeline (E&E News PM, Feb. 8).

"It’s not difficult to see why Senate Republicans are attacking Rep. Haaland if you follow the money," said Mairead Lynn, spokesperson for Accountable.US’s Senate War Room project. "They’re bankrolled by the oil and gas industry and in exchange for hundreds of thousands of dollars, these senators have fought to allow their special interest donors to ravage public lands while shortchanging taxpayers."

Lynn added, "Haaland will prioritize protecting the environment and our public lands, and that has Republican senators and their Big Oil donors shaking in their boots."

Republicans will deny these charges. They have, however, been honest that their opposition to Haaland stems not from their personal ties to the industry but rather from the industry’s ties to their home states.

Economies in states including Wyoming, Montana, North Dakota, Alaska, Oklahoma and Louisiana — all represented by Haaland’s biggest GOP critics on the Energy and Natural Resources panel — are all in some way reliant on the oil and gas sector, whether for drilling or pipeline construction. Critics of Biden’s energy agenda, which targets these sectors, are deeply fearful of the prospects for lost jobs and critical state revenue.

But nuances aside, the release of Accountable.US’s report and planned conference call are just two of several aggressive actions Haaland’s advocates across different organizations are taking in the final hours before her confirmation hearing kicks off on tomorrow morning in Washington.

While it’s unlikely Haaland’s nomination will fail on the Senate floor, advocates and activists aren’t taking chances that the Republican tidal wave against her could somehow backfire.

The conservation movement in Montana, which was ultimately unsuccessful in unseating Sen. Steve Daines last year, is mobilizing another effort to undercut the Republican lawmaker for political positions they say will damage his continued standing in the Treasure State.

Yesterday and today, full-page print advertisements appeared in four of Montana’s major newspapers, and on the websites of two others, to pressure Daines to drop his pledges to slow walk Haaland’s confirmation.

"Senator Daines: Vote to confirm Deb Haaland," the ad reads, paid for by the Montana Wildlife Fund and featuring the names of more than 2,500 Montanan signatories.

"Montana’s Native voters are watching," said one of the signers, Western Native Voice Deputy Director Ta’jin Perez, "and Senator Daines has the opportunity to do what’s right for all Montanans and all Americans."

Daines has insisted he’s "not convinced the congresswoman can divorce her radical views and represent what’s best for Montana and all stakeholders from the West" (E&E Daily, Feb. 8).

The next day, a new coalition of major environmental groups launched as the "People, Public Lands, and Climate Collaborative." It’s first official order of business: a call to action to get Haaland installed at Interior.