Haaland’s bills offer clues to how she might run Interior 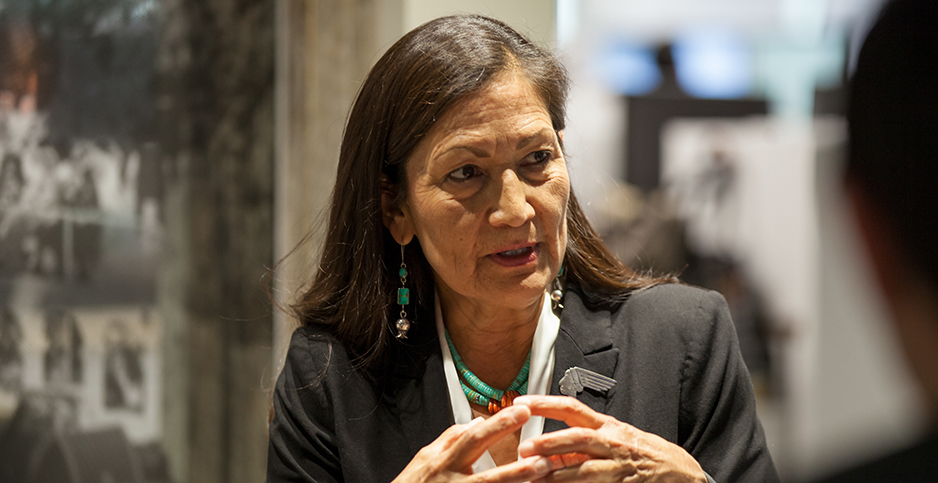 Rep. Deb Haaland has already mapped out what she might try to do as Interior secretary through the myriad bills she’s introduced in Congress.

Long before being named President-elect Joe Biden’s pick to lead the Interior Department, the New Mexico Democrat defined her priorities through the 51 bills and resolutions she’s authored. Few House members have sponsored as many during the soon-to-expire 116th Congress.

One bill, for instance, H.R. 8455, directs Interior to establish an "Advisory Committee on Reconciliation in Place Names" to examine renaming geographic features with offensive place names. The 16-member panel would include four members of an American Indian tribe and one representative of a tribal organization.

"Offensive or racist place names are restricting access and prevent many from feeling welcome on lands that belong to all of us," Haaland said. "It’s past time to change the offensive names of public lands, especially with input from groups who have been discriminated against."

The existing U.S. Board on Geographic Names is housed within Interior’s U.S. Geological Survey, and if confirmed as secretary, Haaland could set up the new advisory committee without needing congressional approval.

In a similar vein, another Haaland bill, H.R. 8420, would establish a "Truth and Healing Commission on Indian Boarding School Policy in the United States" to study the impacts of a federal policy under which American Indian and Alaska Native children were forcibly removed from their family homes and placed in boarding schools.

"I know not many people are aware of the history of Indian boarding schools, and I know it’s not taught in schools, but our country must do better to acknowledge our real history and push for truth and reconciliation," Haaland said.

Yet another measure, H.R. 8401, calls upon Interior and the Agriculture Department to complete an interagency report on the use of special recreation permits by recreation service providers serving environmental justice communities.

The bill defines an EJ community as a community with significant representation of communities of color, low-income communities, or tribal and Indigenous communities that experience, or are at risk of experiencing, higher or more adverse human health or environmental effects than other communities.

"Equal access to natural areas and open lands is a right that everyone holds," Haaland said. "However, low-income communities across the U.S. are consistently denied access to these natural treasures, and the benefits that public lands provide."

It would be a relatively simple matter for Haaland to order up such a study if she were confirmed as Interior secretary.

Other priorities, as expressed in her introduced legislation, would require congressional action.

One bill, for instance, H.R. 1050, would among other steps designate lands within the Organ Mountains-Desert Peaks and Rio Grande del Norte national monuments in New Mexico and in the Gold Butte National Monument in Nevada as wilderness and as components of the National Wilderness Preservation System.