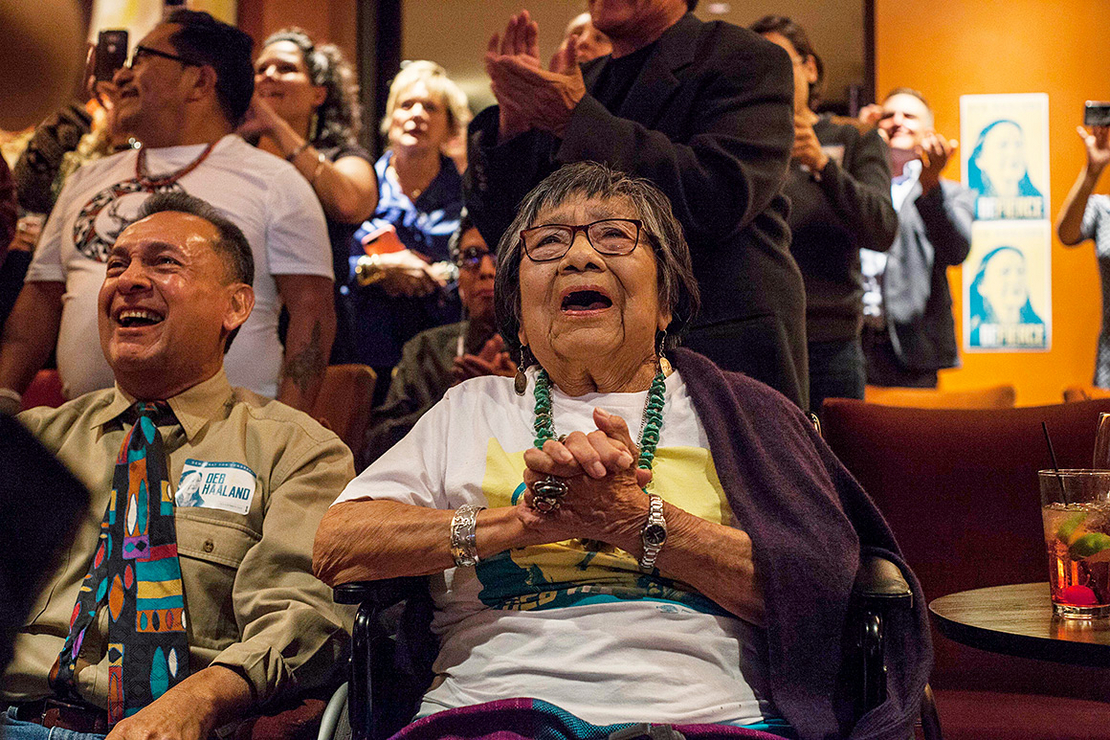 In this Nov. 6, 2018, file photo, Mary Toya, mother to Interior Secretary Deb Haaland, celebrates her daughter’s win when she was elected to Congress. Toya, who worked at the Bureau of Indian Education, has died. Juan Labreche/AP Photo

A Navy veteran who was born in 1935 and married to a much-decorated Marine Corps major who’s buried at Arlington National Cemetery, Toya indelibly shaped the child who became the first Native American leader of the Interior Department.

“As the daughter of a Pueblo woman, I was taught to value hard work,” Haaland told the Senate Energy and Natural Resources Committee, noting that her mother “raised four kids as a military wife.”

In a statement, Interior spokesperson Melissa Schwartz said the department “mourns with Secretary Deb Haaland as she and her family grieve.”

“We celebrate Mary Toya’s long life and are grateful for her 25 years of service to Native students as a member of the Interior team,” Schwartz said. “Mary spoke Keres, raised her children in a Pueblo household, and passed traditional wisdom down to her children, grandchildren, and great grandchildren.”

Schwartz added that “her legacy will live on in Secretary Haaland, all of her relatives, and the countless Native people she inspired.”

Other details were unavailable, and the department did not make public Toya’s age or cause of death.

According to a September 2020 Facebook post by New Mexico state Rep. Tara Lujan (D) honoring matriarchs, Toya’s “parents, along with a strong Laguna community lived and worked on the Santa Fe Railroad [and] Mary was born and raised in a boxcar.”

“I tried clarinet, and I drove my mother up the wall with it,” Toya told the Albuquerque Journal in 2012. “She said either learn it or quit. So I switched to the snare drum.”

In 1953, Toya and the band represented Arizona in the 1953 parade at President Eisenhower’s inauguration.

“It was an honor,” Toya told the newspaper. “I’d never really been out of Winslow until I joined the band.”

According to Lujan’s post, Toya followed her Navy service with work as a BIE teacher’s aide, secretary and, later, office manager for the superintendent of schools in Albuquerque.

A 2019 account posted by the Democratic group Emily’s List detailed the then-83-year-old Toya’s visit to Haaland’s new congressional office in 2019 following her daughter’s groundbreaking swearing-in to the House.

Haaland, according to the report, started pointing to the framed black-and-white photos of her parents and grandparents and a kachina doll from her mother.

Toya reached for her daughter’s hand and tears welled in her eyes, Emily’s List reported.