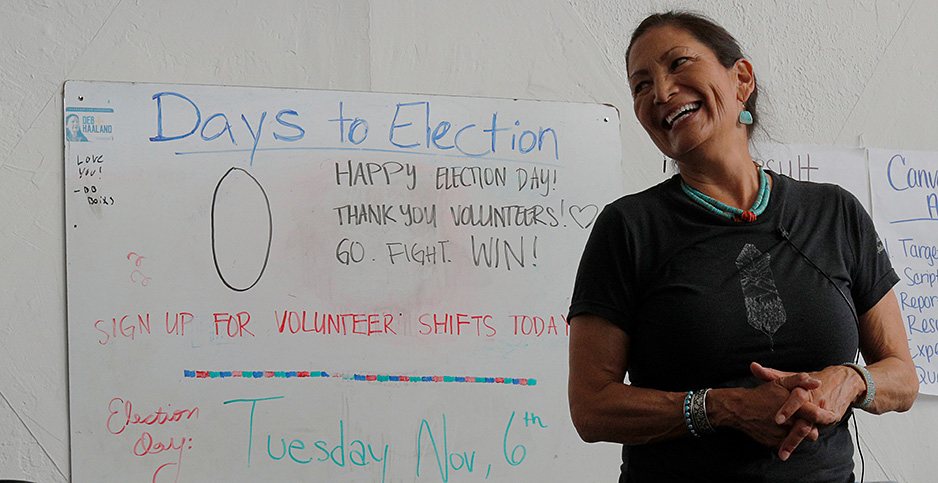 When it comes to political comebacks, few can top Democratic Rep. Deb Haaland.

Running as a rookie candidate for lieutenant governor in her home state of New Mexico in 2014, Haaland lost in a landslide. She recovered quickly, leading the New Mexico Democratic Party for two years and then coming out on top of a six-way primary in 2018 to eventually become one of the first two Native American women ever elected to Congress.

Two years later, she is poised to join President Biden’s Cabinet as Interior secretary, a job that would put Haaland in charge of a federal agency with about 70,000 employees that manages 20% of the nation’s land and has unparalleled influence in tribal affairs (E&E Daily, Dec. 18, 2020).

Haaland’s unexpected ascension carries with it high hopes and worries in the Land of Enchantment, a reflection of both the state’s longtime divisions and its changing politics.

Nowhere is the chasm more evident than in the sharp and growing differences between the state’s 23 tribes and its powerful oil and natural gas industry.

But Haaland’s nomination has also produced plenty of pure excitement.

In a recent opinion piece, Milan Simonich, a columnist with the Santa Fe New Mexican, said Haaland’s rapid rise makes her a contender "for all-time comebacks," noting that Hollywood would have rejected a script of such a quick rebound for any politician as implausible.

"It’s been very fast," Simonich said, "but since she won that congressional seat, you could kind of see the possibilities. … There’s a certain pride, especially from the liberal wing of the Democrats, that she made it. But it’s not monolithic. Some people didn’t think she was ready for it; some people were elated because it’s a breakthrough."

As Haaland awaits her confirmation hearing, New Mexico offers a preview of the bigger political fights over energy and environmental issues that await her if she’s confirmed by the Senate, as expected.

In a state where more than 10% of all residents claim tribal membership, Indigenous groups hope Haaland does more to protect public lands and to give tribes a greater say in how parks and other federal property are managed (Greenwire, Feb. 4).

On the flip side, Haaland’s critics worry that she’ll go too far in promoting the Green New Deal she co-sponsored in Congress, saying it could devastate an energy industry that provides thousands of jobs to New Mexicans.

Biden did not back the Green New Deal but offered his own climate proposals, launching his initial salvos last month with sweeping executive orders. Although less ambitious than his pledges on the campaign trail, Biden’s freeze of new oil and gas leasing and permits on public lands and waters in particular has already provoked passionate opposition (Energywire, Jan. 28).

Tribal allies predict that Haaland’s history shows she’ll be more than ready to stand up to the pressure of business interests.

"I think that Deb is pretty tough and can handle it," said Julia Bernal, director of the Pueblo Action Alliance, adding that "it’s definitely been a moment to celebrate."

Haaland’s hometown newspaper, the Albuquerque Journal, endorsed her opponent in last year’s congressional race, criticizing the congresswoman for backing "extreme far-left legislation," including the Green New Deal and a ban on fracking.

"With her as secretary, she will destroy New Mexico’s vital energy industry," Pearce said.

Ryan Flynn, the president of the New Mexico Oil and Gas Association, expressed hope that Haaland "will employ a balanced approach that considers the needs of all who depend on public lands."

Among other things, he noted that 134,000 New Mexicans depend on the oil and gas industry for jobs and that taxes and royalties from the industry account for 39% of the state’s budget, including more than $1.4 billion for public schools.

Biden administration officials have emphasized that the president’s order doesn’t stop drilling but pauses new leases during a review of the program. The Interior Department has noted that this means states will continue to get royalties for current production and the industry has stockpiled leases on millions of acres of public lands and waters that aren’t being developed right now. According to department data, the oil and gas industry is sitting on about 7,700 unused approved permits to drill.

Like Biden, Haaland has also championed renewable energy as a viable alternative and a way to create millions of new jobs to replace those that would be lost in the fossil-fuel industry during a transition. She has argued, for example, that New Mexico could be a national leader in solar energy production, with the state getting more than 300 days of sunlight per year.

Some other tribal members in New Mexico have questioned whether all really benefit from the oil and gas industry in their state.

"From my perspective, like an Indigenous perspective, we are not benefiting from any of the oil and gas revenue," Bernal said.

"Especially in the Chaco region, our relatives that live within that region are impoverished, and they also experience adverse health impacts," Bernal said. "I mean, there’s no benefit coming."

Haaland has been a leading voice in Congress to protect land surrounding the Chaco Culture National Historical Park from oil and gas development, arguing that public health risks and the climate crisis should rank as higher priorities.

"Sure, if I had my way, it’d be great to stop all oil and gas leasing on federal lands, because those lands belong to all of us," she told reporters in September (E&E News PM, Sept. 28, 2020).

‘Reel in oil and gas’

Lonna Atkeson, a professor of political science at the University of New Mexico, said she first noticed the shift in 2018, the year voters sent Haaland to Congress.

"I had never seen so many people in New Mexico talk about climate change and having to reel in oil and gas," she said. "In fact, I was just stunned, because we are such a big oil and gas state. … That was a real change in rhetoric. Even the governor [Democrat Michelle Lujan Grisham] in 2018 in her race talked about that in a way that I had never heard before in New Mexico by any politician."

Overall, Atkeson said, many state residents and Democrats are happy with Haaland and "proud to see a New Mexican step up" for a Cabinet post: "It was sort of a surprise, given her newness, but she aligns well with the progressive politics that was instrumental in helping Biden win the election."

Hopes among her supporters run very high for Haaland, a 60-year-old single mother who battled poverty, homelessness and alcoholism in her younger years and then used her personal story to connect with voters (E&E Daily, Oct. 22, 2020).

Even her 2014 defeat ending up serving her well, as it helped increase her familiarity with the public.

"She is personable, and it’s a small state," Simonich said. "There’s only 2 million people, and so she is pretty well-known — it’s much easier to become a well-known figure when you’re running for Congress in New Mexico than, say, Pennsylvania or Florida, where they all may blur together because there are a lot of districts."

"The other thing is, she’s been pretty candid," he added. "She had a drinking problem as a young woman. She addressed that and, certainly in tribal lands, alcoholism remains a problem for so many people. I think there was a certain inspiration that she really tried to put that chapter of her life away and move to something positive."

Shannon Kennedy, a civil rights attorney from Albuquerque, called Haaland "a woman of the land" with a long historical legacy as a 35th-generation New Mexican. She said she’s hoping Haaland will work on police reform for Interior Department law enforcement agencies so that people "don’t have to be afraid that the national park rangers are going to act in an aggressive or discriminatory manner."

Kennedy has sued Interior for damages on behalf of a Colorado family whose 25-year-old son was shot and killed by a ranger at a national park in New Mexico last year (Greenwire, Nov. 3, 2020).

"I just think it’s a tremendous honor for us as New Mexicans to have her in this position," Kennedy said. "She’s advancing civil rights as a role model of perseverance and having the chutzpah to do what she’s done with her life alone to advance civil rights. But I also know that she knows the struggles of people who have been systemically discriminated against, and she understands abuse of power, so she’s perfectly positioned to address the crisis of systemic racism in this country."

Nez said he hopes Haaland will "shield our land" from more damage. But he said the oil and gas industry is only part of the source of the environmental degradation in New Mexico and that the Biden administration will also face pressure to clean up the damage caused by uranium mines.

"Over 500 mines are still open here on the Navajo Nation, which the federal government took from tribal lands to make bombs and weapons," Nez said. "And it is time to heal the land and also clean up some of these mines in Indian Country."

The Biden administration has emphasized that restoring abandoned mine land, including uranium mines, should be part of a new jobs effort.

Nez said he has no doubts that his longtime friend is well-prepared for the job and will perform her duties in a way that benefits all Americans, not just tribal members.

"I can see that there’s going to be some changes to our environment in a good way," he said. "In Native American communities, women are the foundation of our families and a steward of the family. Having that viewpoint will also include being a steward of the land."