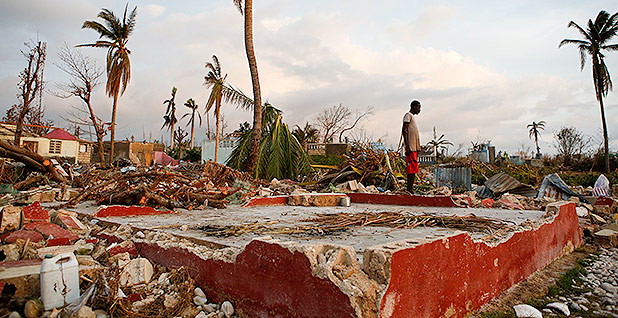 People on the battered island of Haiti weren’t as lucky. It’s 980 miles from Jacksonville, but the damage wrought by the storm was a world away.

Days before the pump failed, the delicate drainage system of southwest Haiti was choked with the hurricane’s heavy rain. Sewage bubbled up into the floodwaters. The untreated waste, officials say, was likely behind the area’s outburst of cholera, which has already killed 13 people.

The marked difference between the consequences of Hurricane Matthew in Jacksonville and in Haiti isn’t restricted to the issue of sewage overflows. The hurricane had very different levels of impact in both regions.

In Haiti, the death toll has already climbed to about 1,000 people. According to the United Nations, around 1.4 million people need assistance, entire towns and villages have been "wiped off the map," and flood survivors are going hungry because the storm destroyed food stocks. Local authorities are struggling to contain the cholera outbreak, but that’s a challenge because of the combination of intense flooding, stagnant water and floating corpses.

Matthew’s devastation of Haiti is an example of what climate experts see as the disproportionate burden that global warming can have on poor, unprepared communities. Phenomena like extreme weather events, sea-level rise, coastal erosion and salinity intrusion tend to effect marginalized people more, they say.

"If you look at the disasters in the ’80s and ’90s, there are several factors that predict a larger impact in developing countries — larger death tolls, larger infrastructure damage and longer recovery rates," said Beth Caniglia, director of the Sustainable Economic and Enterprise Development Center at Regis University’s College of Business and Economics.

A variety of factors are in play: Many developing countries don’t have climate-resilient infrastructure or the funds to build it. This is despite the fact that many are also tropical countries, whose populations stand to lose a lot because of sea-level rise and stronger storms.

"The country doesn’t have a lot of sewer systems," said Peter Wampler, an associate professor with Grand Valley State University’s geology department. "In 2012, only 55 percent of people in urban areas had access to what’s called ‘improved sanitation’ — usually a latrine. In rural areas, that number is only 20 percent. Unfortunately, the geology and hydrology of Haiti have caused cholera to become resident, and so when it rains, it flushes the disease out."

Poor infrastructure also means that it’s more difficult for people to cope with disasters like Hurricane Matthew on a basic level. Homes are generally made of wood or cinder block and aren’t stormproof. According to Caniglia, the storm destroyed around 66,000 homes in Haiti.

"You wouldn’t experience that level of destruction in an industrialized nation," Caniglia said. "Moreover, people in the U.S. can prepare for large-scale evacuations, but in Haiti there aren’t a lot of cars or highways to be able to drive quickly out of the area."

The lack of preparedness extends to the government. According to a 2014 report by Oxfam International, disaster management plans in Haiti aren’t comprehensive enough to address weather events like Hurricane Matthew. In the Sud and Sud-Est regions — which are close to the coastline, low-lying and prone to storms — officials don’t have enough data to put together effective risk management plans.

"There are many things you can do to make a country like this more climate resilient," said Andrew Curtis, co-director of the GIS, Health and Hazards Lab with Kent State University’s geography department. "For example, improve flooding mechanisms — one of the reasons behind the floods was that the drainage channels ruptured and over-spilled — or raise structures that are near the coast to protect them from storm washes and hurricanes. But for countries like Haiti, which are struggling with a variety of massive challenges, there’s not a lot in place to protect coastal towns from something like a major hurricane."

That doesn’t happen in Haiti. It doesn’t have the ability to rebuild with its own resources. It’s because of this vulnerability that many of the least-developed countries are clamoring for international funding to combat the consequences of climate change.

But funding is in short supply, and it comes with its own complications. In Haiti, over half the government budget is supported by aid from the international community. And it isn’t always provided on schedule. Moreover, the Haitian government has little control over how the money is spent.

"There are a lot of emergencies going on in the world — a huge drought in southern Africa, crises in Iraq and Yemen, and the El Niño affecting many parts of the world this year," said Nahuel Arenas, director of humanitarian programs and policy with Oxfam America. "Monetary assistance is stretched, and there’s a certain level of donor fatigue."

"The media is also very absorbed with the American elections, so it’s difficult to bring this up," he added dryly.

National-level early warning systems do exist — like the Programme Nationale d’Alerte Précoce, which is fed information from a system of local warning stations. However, these warnings are based on information collected from the public that isn’t always accurate. Moreover, it follows a manual that Oxfam’s report describes as being "not of the highest quality."

"In many cases, especially in parts of the developing world, we know that people aren’t aware of the resources they can avail themselves to," said Caniglia. "There aren’t early warning systems, or folks on TV telling them what to do. Radios are out of service, and they may not always get evacuation notices."