Half-hour of confusion at Pruitt’s condo 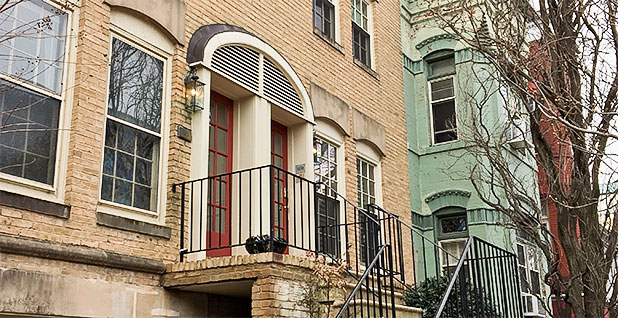 One March evening last year, the Washington, D.C., fire department dispatched an emergency team at 5:18 p.m. — someone was reportedly unconscious.

First responders from Engine Co. 3 raced to the other side of Capitol Hill, arriving just five minutes later at a plush condo building down the street from Senate office buildings. The sequence of events as recorded by the dispatch center indicates concern over what prompted the call, according to the incident report obtained by E&E News under a public records request.

With some redacted words legible under light, the report’s narrative reads, "The caller is unable to assess the patient’s breathing status" and "He is still unconscious." Other notes hint at the confusion on the scene, such as "Fainting" and "Conscious, Breathing."

The subject was EPA Administrator Scott Pruitt. His personal security detail had just broken down a door after he didn’t respond to phone calls or the building’s doorbell.

By 5:51 p.m., the fire department’s last unit left the scene. But that short near-emergency still lingers at EPA more than a year later as Pruitt’s time in the condo has come under scrutiny — the husband of Pruitt’s landlord was a lobbyist whose firm’s clients had business before the agency.

City and federal records provide more details on the unusual episode on March 29, 2017, at Pruitt’s condo, as well as his time as a tenant there. They show top EPA officials were aware of the incident, and a formal investigation — directed not at Pruitt but at his lessor — has already run its course.

During the break-in incident, a 911 operator was told Pruitt wasn’t responding to callers outside the building.

"They say he’s unconscious at this time," according to recordings of the call obtained by ABC News. "I don’t know about the breathing portion."

EPA emails first reported on by The New York Times show senior officials at the agency were following the action minute by minute.

"[redacted] is on site and is breaching [redacted] door to gain access," said one email sent at 5:20 p.m. that day to Henry Barnet, head of EPA’s Office of Criminal Enforcement, Forensics and Training, and Patrick Sullivan, the assistant EPA inspector general for investigations.

More than 10 minutes later, another email said, "They breached the first door."

Barnet and Sullivan were later told by nearly 6 p.m. that everything was OK.

"All good — except for a couple of doors we’ll have to pick up the tab for. The boys did good — they did what needed to be done," said the email, its sender’s name blacked out.

According to the EPA emails, the agency was sent an invoice last May to repay the condo association for the repairing the front door. EPA would later act on the bill, which came to $2,460.

Rep. Betty McCollum (D-Minn.), ranking member on the House Appropriations subcommittee that oversees EPA, sent a letter to Pruitt last month about the incident. She said she owns the unit below where Pruitt was staying and witnessed the break-in.

Saying she was "shocked" that EPA paid for the damage costs, McCollum said, "I know Congress appropriates money for the EPA to protect human health and the environment — not for repairs to the Administrator’s residence."

The lawmaker asked several questions of the EPA chief, including whether Pruitt personally reimbursed the agency for the repair costs.

The news first broke in late March this year about Pruitt’s renting the condo for $50 per night for part of 2017, including the break-in by his security detail. Steven Hart, Vicki Hart’s husband and the former chairman of Williams & Jensen PLLC, had contacted EPA during Pruitt’s stay there, including attending a July 2017 meeting with Pruitt with a client, although he has disputed he was lobbying the agency.

Pruitt’s time in the Capitol Hill condo has become one of several ethics mishaps that have swamped the EPA chief. The EPA IG has said it will review the matter (Greenwire, April 30).

‘Not going to speculate’

Just the day before, on March 28, was perhaps Pruitt’s biggest day yet as EPA administrator. President Trump had come to the agency and signed an executive order onstage in front of coal miners to roll back Obama-era climate regulations, including the Clean Power Plan (E&E News PM, March 28).

The next day, when security guards broke into the condo, EPA officials have said Pruitt fell ill and went home early to take a nap. He was asleep when staff tried to reach him and only woke up after his detail broke down the condo building’s front door.

Pruitt’s schedule that day, obtained by E&E News under the Freedom of Information Act, contained back-to-back meetings. Social media, photos, press interviews and people who met with the EPA chief confirmed Pruitt’s attendance in almost all of them.

At 8:05 a.m., the administrator called into "The Hugh Hewitt Show" for a 10-minute interview, in which he spoke about the fate of the Clean Power Plan, among other topics.

At one point, Hewitt said about Pruitt’s defense of the Clean Power Plan, "This is why the left does not like you very much, because you’re very articulate."

An hour later, Pruitt was scheduled to have coffee with Senate Conservatives Fund President Ken Cuccinelli in his office. Cuccinelli did not respond to a request for comment.

At 9:30 a.m., Pruitt met with officials from Watergen at the request of casino magnate Sheldon Adelson, including Maxim Pasik and Yehuda Kaploun, who confirmed the meeting but couldn’t comment on Pruitt’s appearance or health.

"I can confirm that we met with him to discuss the problems of drinking water in America and our technology being a solution for the crisis of water in the country," Kaploun said in an email. "As to how he looked i have no comment as don’t know him well enough to make any comments on his appearance."

Pruitt then appeared on Fox Business for an interview at 10:15 a.m. During the televised exchange, the EPA chief appeared alert, and the host joked he was the "man responsible for killing the planet."

At 1 p.m., Pruitt spoke before the Oklahoma Farm Bureau during its annual legislative trip, a meeting that was later chronicled in the group’s monthly magazine alongside a photo of Pruitt. "You know what’s wonderful?" the administrator reportedly asked the group. "You all are spending time at the EPA, and you’re still smiling."

When asked about the meeting, a spokeswoman from the Oklahoma Farm Bureau said staff who coordinated the trip that day are no longer with the group and couldn’t comment.

At 2 p.m., Pruitt met with Canadian Minister Jim Carr in his office, the second meeting between the two leaders following a March 9 meeting at CERAWeek in Houston, according to his calendar. Carr would later huddle with Energy Secretary Rick Perry.

And an hour later, senior officers from the National Association of Home Builders met with Pruitt in his office, where a spokeswoman for the group said discussions focused on the Waters of the U.S. rule, regulations tied to lead and storm water regulation. When asked whether the agency chief appeared ill, she declined to comment.

"It is and has been standard practice for NAHB to arrange these types of meetings with administration officials and various agencies to discuss our industry and top issues," said Liz Thompson, a spokeswoman for the group. "The conversation of his health never came up at the meeting, and we are not going to speculate on whether or not he was feeling ill."

Following Pruitt’s meeting with the home builders, a block of time is redacted on his calendar under FOIA’s privacy and deliberative process exemptions. That could cover what Pruitt was scheduled to do just before or during his security detail’s breach of the condo.

EPA press officials didn’t respond to questions from E&E News for this story, including what Pruitt was doing during this time. The agency also didn’t provide an unredacted copy of that page of Pruitt’s calendar when asked.

An earlier version of Pruitt’s calendar obtained by E&E News under FOIA last year shows the late afternoon time slot was kept on "hold" for a meeting with then-CIA Director Mike Pompeo. Asked whether that meeting did happen with Pruitt, a CIA spokesman declined to comment.

After the break-in that evening, Pruitt was scheduled to meet with Bob Murray, CEO of coal giant Murray Energy Corp., the morning of the following day. Murray confirmed for E&E News that he did meet with the administrator.

"However, he will not disclose the content of their communications, except to state that they discussed ways to protect the jobs and family livelihoods of coal miners in the United States and to preserve reliable, low-cost electricity for all Americans, while still protecting the environment."

‘The day the locks were changed’

E&E News also obtained the investigative report by D.C.’s Department of Consumer and Regulatory Affairs. The agency was looking into whether Pruitt’s landlord, Vicki Hart, had a license to rent to the EPA chief.

The file adds new details on Pruitt’s time in the condo, including pictures of the building as well as emails with Hart about her famous tenant. The investigation began just days after the first story broke about the administrator renting a condo linked to a lobbyist.

"I am writing to let you [know] that Mr. [redacted] moved out of the unit on August 4, 2017. No one has rented the unit since then, and we have no plans to rent the unit in the future," Hart said in one email April 2.

The investigator’s notes also show that Hart said in a phone interview that Pruitt’s lease was from Feb. 20 to April 1, 2017, but the EPA chief "did not vacate the premise until 04 August 2017."

"She further claimed that he was charged fifty-dollar ($50) per-night stay."

A person familiar with the Harts’ rental agreement with Pruitt confirmed that Aug. 4 was when the EPA chief left the condo.

"That is the day the locks were changed. He did not come back to the condo," said the person.

In a later email to DCRA, Hart reiterated that no one was living in the unit.

"It was nice talking with you. As we discussed, I do not have any tenants" in either condo unit, Hart told the investigator.

The investigator even sought a certification from DCRA’s business licensing division that Hart didn’t have a license to rent the condo. She concluded that Hart had engaged in business without the proper paperwork.

"Refer to the Office Civil Infractions for service of the Notice of Infraction," recommended the report.

A DCRA spokesman told E&E News that Hart paid a $2,034 fine last Friday for renting the condo without a license.