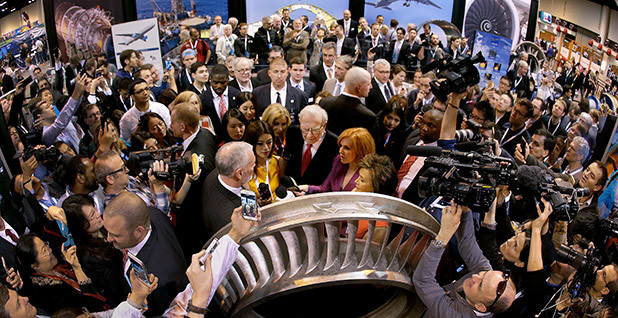 Warren Buffett tours the exhibit floor before presiding over his company's annual shareholders meeting Saturday, where he rejected conducting a report to understand the risk climate change may pose to Berkshire Hathaway's holdings. Photo courtesy of AP Images.

In comments to ClimateWire after stockholders of Buffett’s Berkshire Hathaway Inc. on Saturday rejected a shareholder request that the company study the risks climate change may pose to the global insurer, Hansen said a price on carbon emissions would establish a "level playing field" for energy sources. And Buffett’s support could be dramatic, he said.

"I think that he is a good person and may come to understand what the real issue is," Hansen wrote of Buffett in an email. "He can potentially make a huge difference, given the respect and trust that the public feel for him."

Hansen spoke at the meeting Saturday and suggested Buffett consider publicly backing a "revenue-neutral, gradually rising" carbon fee, according to a copy of his remarks.

Hansen said he doesn’t want a quick reply from Buffett, whom he encouraged to weigh the suggestion and "interact with people such as Bill Gates." The Microsoft co-founder is a director on Berkshire Hathaway’s board.

"I hope that you will reflect upon it and perhaps provide a clear statement in your next report," Hansen told Buffett, perhaps the most influential investor in modern American history. "It could be your greatest legacy."

‘We knew we weren’t going to win’

The Nebraska Peace Foundation, an environmental advocacy group, filed the resolution requesting that Berkshire Hathaway "issue a report describing the division’s responses to the risks posed by climate change." The vast majority of stockholders voted against the proposal.

In February, America’s most famous value investor said he didn’t see the value in publishing such a report.

Buffett at the time told shareholders they shouldn’t worry about how climate change could affect the firm’s insurance division, since policies can be rewritten annually to reflect new risks (ClimateWire, Feb. 29).

Berkshire Hathaway representatives did not did not respond to multiple written and phone requests for comment or provide information about the vote results.

"We knew we weren’t going to win," said the Nebraska Peace Foundation’s Mark Vasina, who introduced the proposal for the foundation at the meeting. The goal was to raise the issue, he said.

Responding to the foundation’s resolution, Buffett said climate change is highly probable, not certain, and poses "no adverse impact on the insurance business," Vasina recalled.

Berkshire Hathaway is a holding company with brand-name subsidiaries, including BNSF Railway and GEICO, the insurance company.

"Insurance policies are customarily written for one year and repriced annually to reflect changing exposures," Buffett said in his letter to investors this year. Since policies can be updated so quickly, climate change isn’t a concern for Berkshire Hathaway’s insurance division, Buffett wrote.

Expert: Repricing not the answer

James Jones, director of the Katie School of Insurance and Financial Services at Illinois State University, told Buffett in person Saturday that wasn’t an accurate assessment.

If climate or other insurance risks climb too sharply, Jones said in an interview, the conventional wisdom is that a company like Berkshire can just pull out.

"That’s not the reality," Jones said. "As you can imagine, you can’t just reprice and withdraw entire books of business."

After new hurricane models emerged following Hurricanes Katrina, Rita and Wilma, insurers began leaving the Florida market, according to Jones. Insurers are still reacting to the advent of that updated hurricane modeling, he said.

"The idea that you can just walk away from it," Jones said, "it doesn’t even make sense from a market standpoint."